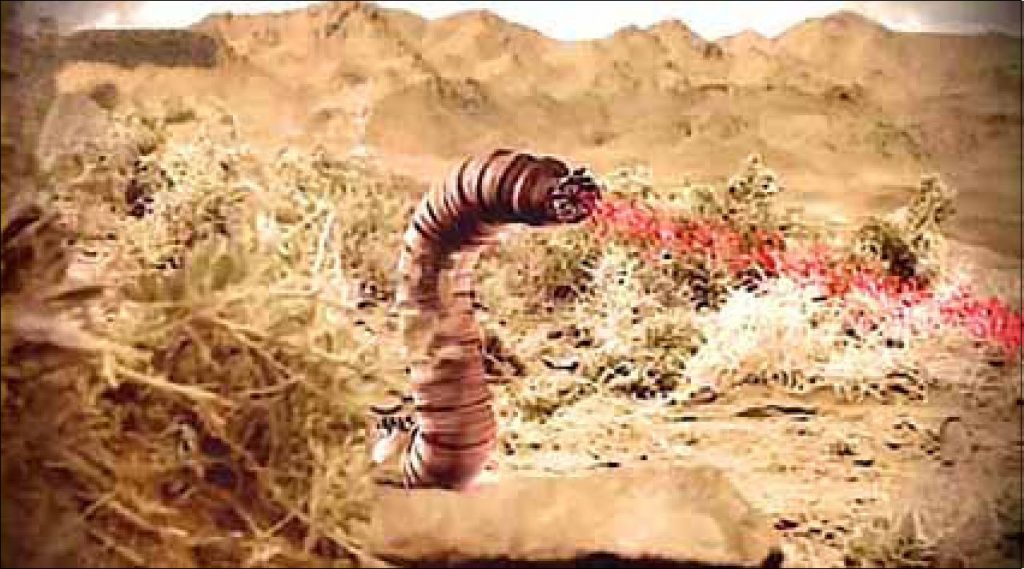 Inhabitants of the southern territories of the Mongolian Gobi Desert fear a mysterious worm-like creature, which is called the Mongolian death worm. Unknown to science, this elusive creature is more than 1.5 meters in length and, apparently, capable of killing either with the help of a jet of strong caustic poison, or using a powerful electric discharge.

Nomads talk about a herd of camels walking on the sand, in which the worm of death was hiding, and as soon as another camel touched it with a foot, it fell dead. In the 1990s, the famous Czech explorer Ivan Mackerl made two expeditions to the Gobi Desert in order to detect this intimidating creation. Although his expedition did not find the worm of death itself, it collected a lot of data about this animal by interviewing the local population.

The materials collected by the expedition included the report of a group of American scientists who visited the region earlier. The report indicates that one of the Americans, digging in the sand with an iron rod, was suddenly killed, accidentally touching the worm of death in the sand. If this story is true, then the only mechanism by which the death worm can kill is an electric shock. All known to date electricity-generating animals are fish that live in water – a good conductor of electricity.

If the worm of death does exist and kills with an electric shock, then most likely it generates electricity not inside, but outside itself by friction. This phenomenon is called triboelectricity and occurs when the outer surface of the worm (in this case the worm should be covered, like reptiles, with scales) at the moment of movement about the sand.