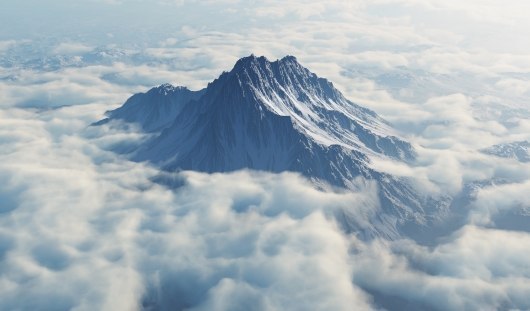 Mount Olympus (mount Olympus) is located in the northeast of Thessaly. Its height is 2917 meters and almost every one of them is shrouded in myths and legends. In Ancient Greece, Olympus was a sacred place where the gods live, about which many legends were laid. In dewdrops one can see Poseidon’s look for a moment, gray stones keep the secrets of Hephaestus, and a light breeze reminds of the beautiful Aphrodite.

At the foot of the northern slope of the mountain there was even a sanctuary of the Macedonians – Dion, considered the city of Zeus himself. People aspired to be closer to those who were worshiped, but did not dare to rise higher without extreme need, because the punishment of heaven could overtake the ignorant.

Olympus will never abandon the spirit of ancient Greek mythology. That is why this place is so popular among historians and adventurers. The opportunity to walk through the ancient abode of the gods is not given to everyone. Sometimes on a sacred mountain there are unusual natural phenomena: strange clouds hang, lightning squalls or storms of anomalously strong winds are raging. They say that at such times the gods wake up from the centuries-old sleep and descend to the very top, like mortals.

This mountain range is truly unique, as it is not only a mythological and historical symbol, but also a natural monument. The National Reserve of Olympus, located within Pieria, and partly within the nomenclature of Larissa-Thessaly, is characterized by enormous biodiversity. Here there are 1,700 species of plants, 23 of which are endemic, that is, grow only in these parts. Sometimes on the slopes of the mountain you can find rare herbs, long listed in the Red Book, samples of which are not found more often than a couple of times in a decade. Perhaps it is from these herbs that the Colchian princess and sorceress Medea made a deadly poison for her rival Glaucus, who led her lover – Jason …

Mount Roraima, also called the “heavenly island”, is located at the junction of Venezuela, Brazil and Guyana. The peak of the mountain with an area of ​​31 square kilometers is impressive with its size. Roraima is one of the oldest geological formations on Earth, since it consists mainly of quartz sandstone, whose age is about 1 billion years!

Indians believe that this mountain is the petrified remains of the trunk of a huge tree that gave rise to all the fruits and vegetables of our planet. According to the legends, the tree fell from the ax of Makunaim, the negative hero of the Indian legends. This mountain is also called “the mother of all rivers,” because on its summit originate Orinoco, Essequibo and Amazon. The rivers descend from the “heavenly island” down the steep slopes to dozens of beautiful waterfalls.

It is believed that the flat top was inhabited by the gods, so the table mountains are also called the word “tepui”, meaning “house of the gods”. The Indians believed that it was there that the souls of the dead flew away. Therefore, before the Europeans came to Roraima, no one rose, afraid of anger the sleeping ancestors and mighty deities. Even in our days there are indigenous Indians who believe in the gods of the sacred mountain, rewarding the illumination of the people still worshiping them. By the way, it was Roraima who inspired Arthur Conan Doyle to write the legendary novel The Lost World.

A flat mountain sometimes reminds a ship that cuts the heavens in an eternal journey to the valley of dreams, dreams and desires. It’s worth climbing to the top and a storm of emotions will overwhelm you. The sight can not be forgotten and the echoes of blissful euphoria will excite your blood even after a year. Perhaps this is a piece of the gift of the gods, sung in ancient traditions?

The famous geo-anomalous zone, located opposite the village of Molebki (on the border of the Perm and Sverdlovsk regions) on the left bank of the Sylva. The discoverer of this zone is the Permian geologist Emil Bachurin, who in the winter of 1983 found a round trail with a diameter of 62 m among the snows. In the autumn of next year he also noticed a bluish glow in the form of a hemisphere in the forest.

Further studies have shown the presence of a strong biolocation anomaly in the zone. In the zone, there were huge black figures, glowing balls and other bodies allegedly demonstrating reasonableness of behavior: they formed themselves in the right geometric figures, watched the members of the expeditions and flew away as the stranger approached.

In September 1999, during the 70th expedition of “Kosmopoisk” in this region, sound mirages were repeatedly observed. All present several times clearly heard the sound of the approaching motor, the “droning machine” even went to the clearing, but … the car itself was never seen. Machines, judging by the absence of traces, have not been there for months at all. The location of the zone is well known to ufologists and tourists. In the early 1990’s, when the number of visits to the area by tourists exceeded the permissible limits, it was almost impossible to conduct any research in this area. The press reported that the Permian anomalous zone had ceased to exist, and in the mid-1990s tourism business in this place fell significantly. But in this case it is strange that even today we can hear new stories about clashes with mysterious forest areas.

The Yakima reservation, located in the south of Washington State, is the most frequently visited area of ​​unidentified flying objects. Local Indians can tell about it a lot of mystical legends.

Especially among them stands out a story about a mysterious man with strange eyes. As the legend says, he was a stranger who could nail the Yakima tribe because of his ability to heal the sick. When he was old, he asked me to give him a special place to calmly leave this life. Indians say that they saw how, after death, the healer’s body picked up and carried to the skies a mysterious flying object. Since then, the anomalous phenomena in these places have become commonplace.

It was here in 1947 that the first observations of the “flying saucers” served as the beginning of modern UFO disputes. Local residents began to tell stories about the red, orange and even white lights that sometimes saw in the night sky. The lights could hang over the ground or vice versa – move with the speed of the unusual technique of those times.

In 1972, the famous astronomer and researcher J. Allen Heinek, interested in the secrets of Yakima’s reservation, obtained funding sufficient to study the phenomenon. Professional equipment allowed you to get several shots with unidentified flying objects.

In 1973, under the leadership of Harley Ratlige, the project “Identification” took up the study of the anomalous zone. Thanks to a special program of action and more advanced equipment, they were able to obtain photographs of 12 unexplained heavenly lights and record 178 UFO sightings. But despite the huge amount of money spent, as well as the work of a whole team of scientists and engineers, researchers have not been able to make much headway in the study of unidentified flying objects.

The current review is based on prohibited information, so we have no right to publish the geographical name, coordinates and documentary photographs of this place. Otherwise, we can be closed for aiding biological terrorism. But in spite of the fact that we are constrained in arms and legs in our classical format, we will venture to make a review that does not invalidate the legislation of the Russian Federation.

The lake of death (conventional name) was lost in the wilderness amidst the huge mountains of southern Russia. An unremarkable tiny reservoir for 1 year has claimed the lives of several hundred living beings.

It all started with the fact that grazing animals returning from the side of the lake began to worry about their behavior of local settlers. People did not need medical education to understand that excessive shyness, excessive salivation and unjustified aggression were not the norm. Moreover, all animals, after a few days of strange behavior, perished. People, frightened by an epidemic of rabies, informed the duty-dispatching service about this, which in turn transmitted information to the sanitary and epidemiological surveillance.

A sample was taken from the lake, confirming the presence of strange living organisms in the water. The contaminated reservoir posed a real threat to the inhabitants of a small village that was located several kilometers away from it, it was decided to temporarily move away.

But the secret of the Lake of Death lay within him. Rusted barrels from chemicals found on the bottom of the mud, talked about the illegal discharge of technical waste. If they were properly disposed of, then there would be no mutation of microorganisms, or correspondingly infected. Search for possible violators, polluting the environment, did not bring any result – there were not a single plant or enterprise in the district. At the deadlocked investigation there were suspicions of biological terrorism.

Unknown to the virus, the virus was very much like rabies, but it was not so – there was no infection through saliva. Samples of microorganisms were studied in laboratories, the site itself was repeatedly examined by specialists, but the problem required more detailed study. All attempts to decontaminate the reservoir failed and in order to avoid an epidemic, the area around the lake was encircled.

At the moment to the Lake of Death, no one is allowed in a radius of 5 km and it’s not just words. At the popular alpinist forum, there were already indignant exclamations that their usual route was violated by the military, who “urged” them to change the direction of the movement.

What mysterious contents were in the barrels and where did they come from? Can microorganisms reach residential settlements through groundwater? Are wild animals and birds capable of leaving the protected area a viral danger? The answers to these questions lie behind the seven locks.