Near Earth outer space is a real war for the Earth

Strange events occur not only in our world, but also very close to us in space. An unusually large number of UFOs appeared on our planet and it seems that the real “Star Wars” unfolded there, someone is bombing our Sun and it is quite likely that the coronavirus also came from space.

If you look at all the latest unusual incidents, you can see that the number of meteorites falling on the surface of the earth has increased dramatically, but is it meteorites at all? Maybe these are fragments of alien spaceships – echoes of the space war that unfolded over our heads in outer space?

On March 20, something exploded on the far side of the sun. The Solar and Heliospheric Observatory (Soho) recorded debris flying above the eastern tip of the sun. The place of the explosion was hidden from view, so we do not know what exploded. But, it was not a sunspot. According to astronomers, it is more likely that the thread of magnetism became unstable and exploded, throwing pieces of itself and the surrounding plasma into space. 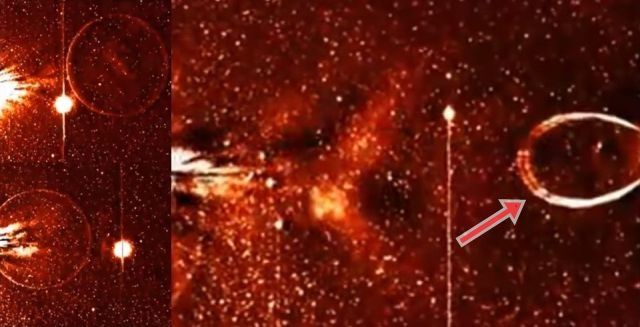 The sun has long been at a minimum of activity, no emissions, active spots, flashes – no, and suddenly such a powerful explosion. But what if all these tales of the “strands of magnetism” are set aside and imagined that a fleet of alien spaceships was moving toward the Earth, but in near-solar space he met with another fleet, another alien civilization, and a battle took place. 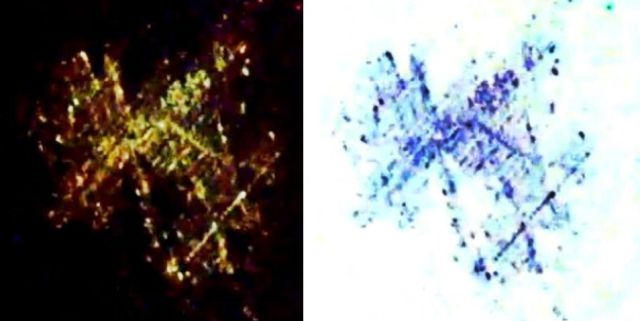 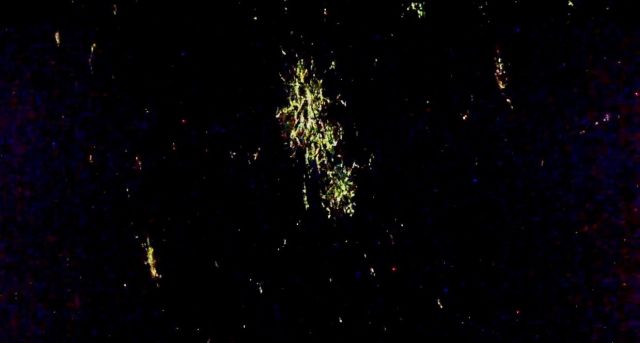 The result of all this was “meteorites” and “threads of magnetism”, or maybe a giant star cruiser with powerful weapons on board and a power plant with such energy just collapsed onto the surface of our sun that the incredibly powerful explosion occurred that pierced a huge hole in the sun and throwing so much energy into space?

A lot of strange events have been happening in space lately, think about the wave of huge alien spaceships and clusters of smaller UFOs observed from the ISS, and they are visible on live broadcasts. They were visible in February and the first week of March. Although at the time of the appearance of these objects, the broadcast is interrupted, but enthusiasts manage to record live footage.

Further analysis of frames with large alien spacecraft seen from the ISS shows that they were destroyed or at least seriously damaged, and are surrounded by countless fragments and broken parts from these UFOs, while clusters of smaller UFOs can be rescue capsules.

Rescue capsules with crews of spaceships destroyed in battle during the battle of two groups unknown to us with space battle fleets.

COVID-19 pandemic, look at what’s happening in the world. I can’t believe that the whole world is ruining the global economy because of this virus. Indeed, well, let’s argue sensibly – there is no pandemic, nothing out of the ordinary for taking such quarantine measures does not happen, essentially confining isolation of entire countries, cities – millions of people on Earth!

What is happening, that the leading states of the world are ruining the global economy of our civilization – they are ruining their economy in the end. Is that the deadliest virus? Is this a plague? no – dying of ordinary flu – now – more people than worldwide died from coronavirus! Why have these unusually harsh measures been introduced now in this regard? Maybe the virus really came from outer space and the consequences for those infected are not limited only to the likelihood of death. Maybe everything is much more complicated? Maybe the survivors will not be the same?

Maybe for the Earth very close to it by cosmic standards there is a real battle? The virus does not stop the global economy. There must be better ways to deal with this virus than simply shutting down the global economy. Something more than the virus is happening, and it looks like they are testing a methodology for global isolation of our planet’s population for the upcoming World Event.

From this point of view, it seems that there is a space battle going on, and we are on the line of fire of this space war, which, it seems, is still ongoing and it is not yet clear who will triumph in it – those who flew to Earth to enslave it or those unknown forces that entered the battle with these invaders and are now waging a space war with them?

The world is being prepared for something to happen that everyone should be prepared in advance and it is likely that a “pandemic” was invented, just to begin further global isolation, to prepare all services, forces, government and military for something more dangerous than “coronavirus”?

The world is being prepared for something to happen that everyone should be prepared in advance and it is likely that a “pandemic” was invented, just to begin further global isolation, to prepare all services, forces, government and military for something more dangerous than “coronavirus”?

Earth’s population is preparing for something global and very crushing. so dangerous that civilization is ready to sacrifice the world economy and stability in order to prepare the population for this event. To prepare him for a ruined economy, worsening living standards, for life in cities locked and blocked, to prepare and train him to live in such very unusual conditions for modern civilization. To accustom the population, to prepare power, medical, rescue, service, military structures for actions – the right actions in a situation for which everything should be prepared.

Maybe I’m right and in space next to the Sun there is already a space war and the outcome of its outcome is not yet clear. Whoever wins will get our planet in ownership. Who will it be – the aggressors or those who are trying to protect us. But are they protecting us, or is there just a battle between two forces – the aggressors for the right to possess the Earth?

Or something is coming that is no less global, but not related to the theory of alien invasion, but of such a nature that it can inflict no less damage on our civilization and put it on the brink of survival. Perhaps such. There are options – for example, a pole flip or a powerful flash (explosion in the sun), such a force that our civilization will be discarded in development in the Stone Age.

Hypothetically, there is the likelihood of such a cause of everything happening – yes, there is. It remains only to wait and observe, analyze and search for pieces of information in order to understand the essence of the events taking place now.