On March 15, at about 23 o’clock, the crew of the Langasov POM car (village police station) as part of the police sergeant Baranov AM and the police sergeant Cassin VI during the patrolling of the village of Lyangasovo drew attention to the fact that in the sky, towards the village Boroviki Kirovo-Chepetskogo area there is a strange glow. Fire? We decided to drive up to the transitional railway bridge of Lyangasovo station and try to clarify, having risen on the bridge, the source of the glow.

From the report of the foreman Cassin:

“… In size it was more than a disk of the moon in 2-3 times, bright yellow in the shape of an egg, but not pronounced, pointed, directed in the opposite direction by observation, on the surface of the object there were highlights, reminiscent of” playing sun “, The highlights were white throughout the surface. The object was at the height of the treetops, but did not touch them. ”

From the report of the senior sergeant of militia V. Votnitsk, police officer of the LOVD at Lyangasovo station:

“… I saw an unknown object of bright yellow color, 2 times the size of the sun, the shape of an ellipse, on the eastern side of a small depression, the ellipse is stretched horizontally. From him to the bottom the rays departed, were very bright, in the form of rain … When I looked at the object, my eyes immediately got sick and tears flowed, because it was very bright. ”

The police lieutenant in charge of the LOVD Mozhaev SA describes the events as follows:

“On March 15, 1990, about 24 hours I went outside and decided to walk on the platform.
Opposite the station building, I noticed a ball of very large size, it was a dark yellow color. From the balloon, a wide beam was moving away, which shone very briefly, then disappeared. The ball itself bifurcated at a distance of about 5-8 meters from the main one, towards the east there was a circle of another 1 ball, but not on the entire circumference, the ball shone in the form of a glow of scarlet color.
The glow rose from the ball visually meters by three or four. If you look at the trees, the ball hangs over the very crowns, even a little lower, if you look from the bridge across the roads. Approximately 10-12 minutes later the color of the ball changed from dark yellow to light yellow and as it seemed to me at first it began to move to the west. I took the benchmark of the tree trunk and made sure that the ball really began to move. The time was 0 hours 8 minutes. Moved a little distance, the ball dissolved. ”

And here is what told about the events of that memorable night the ticket cashier of the station Lyangasovo station Kolenkova Ye.B .:

“At 23:45, a policeman from Votintsev knocked at the window of the ticket office and said that aliens had arrived and that I had fled to the bridge. Running on the bridge, I saw in the sky an object of dark yellow color, the size of the sun at sunset, ie, the increased size. The object hung low, directly above the treetops. I noted that constantly looking at the object hurt the eyes, but there were no rays from it, it was glowing, the effect is how to look at the light bulb for a long time. The object seemed to vary in volume, and something was scraped inside. When I tried to look more closely, I saw the globular object glare horizontally. ”

Analyzing the stories of eyewitnesses, we can make the assumption that the object changed its shape, perhaps because of its rotation. Here is an interesting and so far unexplained phenomenon observed on the night of 15 to 16 March from the village of Lyangasovo.
By the way, the attempt of an officer of the LWO D senior lieutenant to interest this phenomenon of our meteorologists has not been successful – alas, they are only interested in the weather.

The material was prepared by V. Ishchenko, deputy. Chief of the political part of the LOVD at Lyangasovo station, the captain of the police. 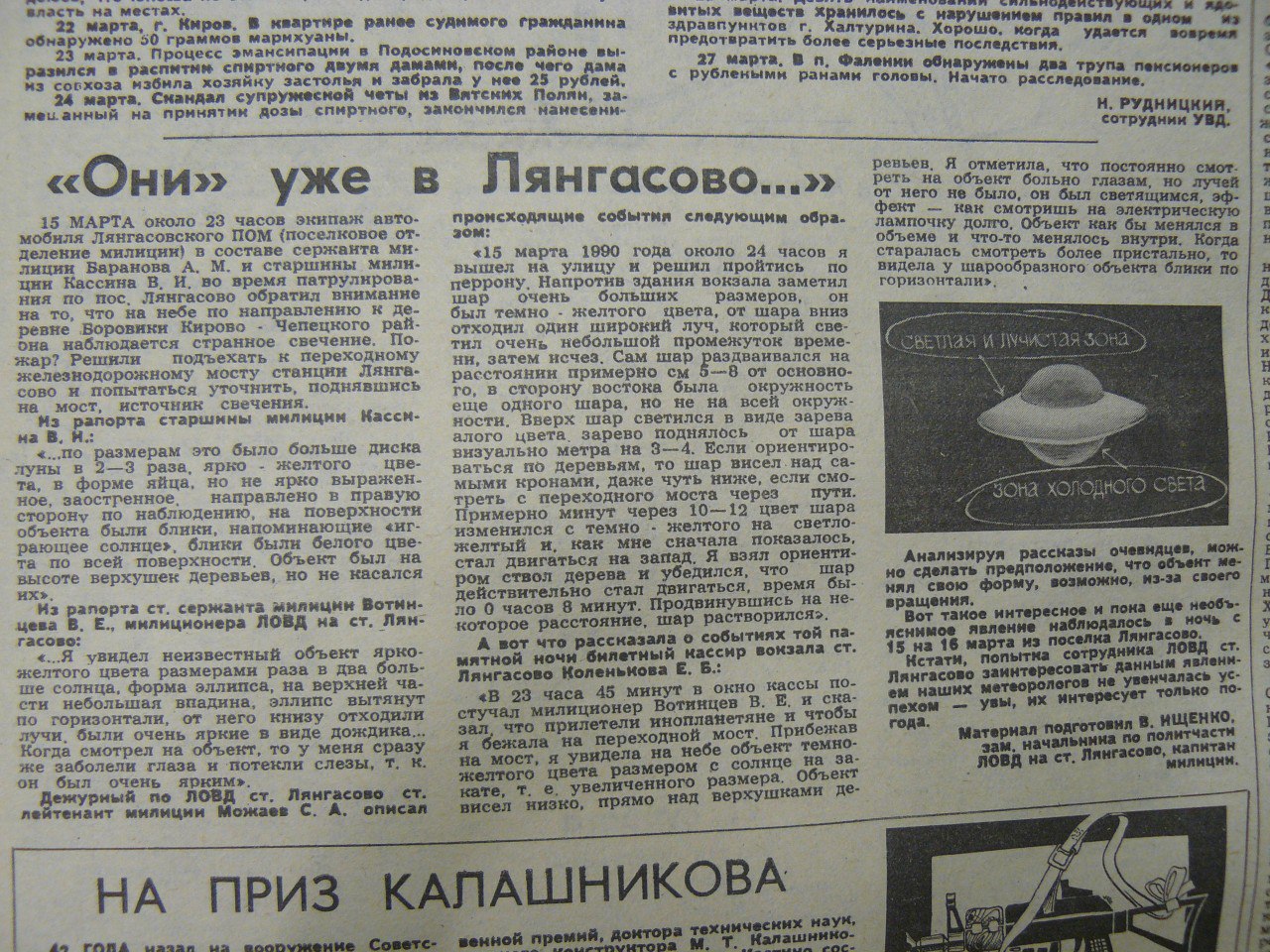 Ljangasovo – microdistrict in the Leninsky district of the city of Kirov, formerly a city-type settlement.