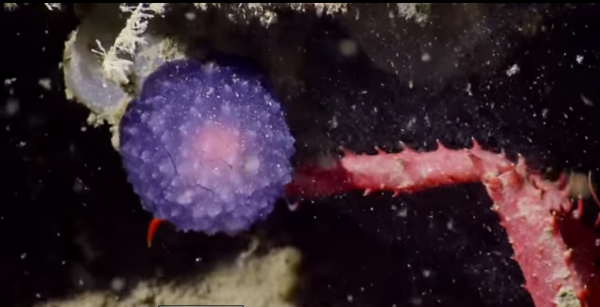 American scientists from southern California during the next expedition to study marine life off the coast at the bottom of the ocean suddenly discovered unknown to science, the strange, but undoubtedly alive, glowing sphere.

The diameter of the sphere small strange, but nothing like scientists up to this point nowhere to be found. A team of scientists who discovered a strange sphere’m sure this is a new form of life.

And the scientists did what scientists usually do when discovering an incredible, previously unknown form of life – without hesitation they sent to the bottom of the ocean controlled robot that, using special devices seized the glowing sphere and brought it to the surface where scientists began to take all sorts of tests and poking in the mystical sphere scalpels.

The result of these manipulations conducted over this unknown science creature it suddenly became loose, and then split into two equal parts. What happened then and what we found out the results of studies of the mysterious creature not yet known.

When I watched the video it felt like I was watching the first contact earthlings with an alien life form. This life has overcome billions of light years, came and plunged into the ocean, where the historic meeting took place, which for the visitor from the stars has ended very badly.

You know what it is, the mad scientists approach to everything unusual that they find. It is necessary to grab, to wrest the creature from its habitat, ripping it and cutting, poking syringes to take samples and finally to kill. But if this creature was the only copy? But who cares…