On the Lake Seliger there lives the monster? 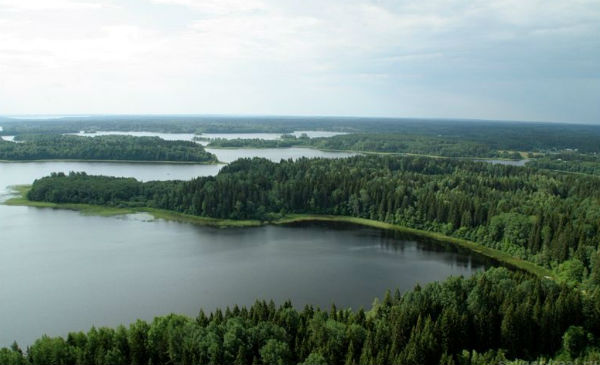 According to eyewitnesses, in system of Lakes Seliger there lives the monster surprisingly similar to famous Scottish Nessie.

It was seen in the middle of the XIX century to what there is even a documentary evidence: the letter dated August, 1854 in which the following is told is stored in archive of the city of Tver: “In deep parts of system of Lakes Seliger or, perhaps, only in imagination of people, the monster of the huge sizes lives…”

Meanwhile in 1996 one of local residents, the elderly woman, noticed some unusual big subject which it accepted for a log in the beginning in lake water. But, having peered better, she made out the huge scaly head with the unique eye. The being reminded at the same time both fish and a snake.

And the 7-year-old little boy from the tourist camping stretched on the bank of the lake came running to parents, heatedly shouting of what he saw in water of this dragon. Adults immediately ran on the coast with the camera. The unique picture of “monster” which bypassed then all local newspapers was so taken (it wasn’t succeeded to find this photo in network).

In a picture only the lake panorama with the dark object floating in the foreground, a detail it was visible it is difficult to consider. When there were other eyewitnesses, with their help it was succeeded to create an approximate portrait of an animal: it looked as a toothy reptile about 5 m long.

Then to the lake there arrived the group of the Moscow journalists. But they couldn’t find any traces of the monster. However the scientists who made attempt to research a phenomenon consider that to put an end still early. In those places many years rumors about an unknown monster which emerges on the surface of the lake from time to time go.

Much old residents saw it own eyes. Among the population of neighboring villages the most this panic from time to time reigns — people are afraid that the animal will leave water and will creep to their houses.

Each of theories conceals in itself still a set of questions and riddles, generating new. Truly only the fact that monsters leave on depth, feeling approach of the person, leaving on a surface only the dispersing circles…