Over the American base in Greenland, a UFO exploded in the sky 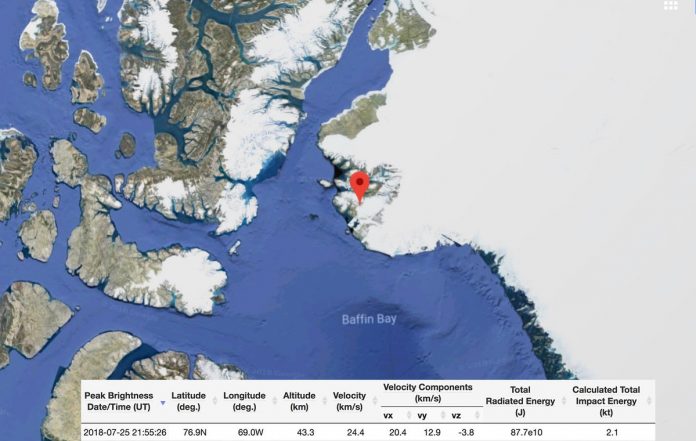 A mysterious fireball appeared in the sky over Greenland and an explosion similar to that of a small nuclear bomb exploded. Everything happened not far from the US airbase in Greenland.

Information about what happened was posted on his Twitter account Ron Baalke, a scientist from the Jet Propulsion Laboratory of NASA.

“The fireball was discovered over Greenland on July 25, 2018 by US government tracking systems at an altitude of 43.3 km,” he wrote. The energy from the explosion is estimated at 2.1 kilotons!

Hans Christensen, director of the Nuclear Information Project at the Federation of American Scientists, said that the meteor exploded “over the base of the early warning of a missile strike at Tula airbase,” the northernmost American base that has been operating on the island since the 1940s.

And Hans Christensen made other strange statements in the spirit of “We are still alive, which means it was not a nuclear strike by the Russians in the US, which is good, because we are always ready for such a blow and we have more than 2,000 nuclear missiles ready to launch here.”

Well, it is clear that it would not happen, but the Russians are always to blame. Not only the USA was lucky, in the sense that they are still alive-lucky all over the world that we are all still alive on this blue ball, since an explosion comparable to the nuclear one over the US military base could well become the trigger of a global nuclear war and then there would be no one to figure out what was the cause – a meteor or UFO or a comet.

The question remains, what kind of “meteorite” is it and what size was it, that it jerked with a capacity of 2.1 kilotons and why did nobody notice its approach to the Earth and what was it at all? Of course, as usual, no one knows anything intelligible about us. All is well beautiful marquise, until such a “meteor” falls on the city of a millionaire and does not explode there with the power of a “small nuclear bomb” …