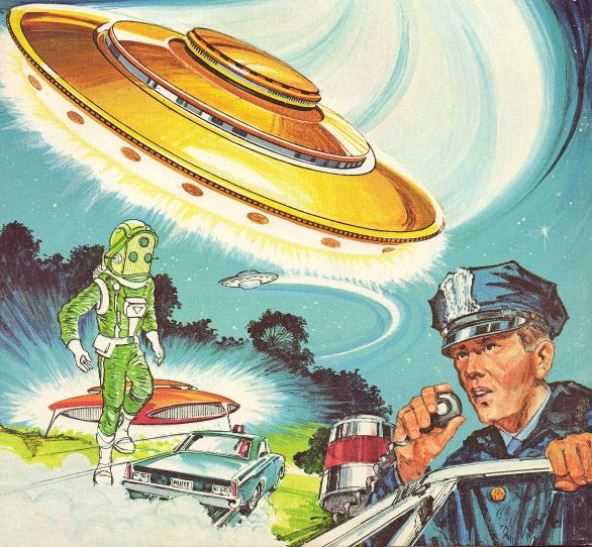 When people encounter something out of the ordinary, the first impulse is to contact the law enforcement. And indeed, the police of all countries complain of aliens, ghosts, vampires, witches and various monsters. And some cases do not find a rational explanation.

Calls from the world

The main police Department of the County of greater Manchester (England) only for 2015 received more than 400 calls complaining of various “paranormality”. So, in August, a subject told the police that there is a parallel world and can not go back, although able to call on the phone. The call really failed to track.

And in October, the police called the man who said that died tragically a few months ago. He turned to the guards with a request to convey his wife and children that he loves them and misses them in that light.

The police decided to check the information. Turning to the house where the deceased, according to him, had previously lived, police learned that the head of the family actually died in a car accident at the end of 2014. More the connection did not go.

“Goblin” from the case

African in Bulawayo (Zimbabwe) at the police station was a family of citizens, accompanied by a local shaman. These people sued the law enforcement officers the suitcase, which, according to them, is a strange being that belonged to the man who rented their house accommodation.

First, the police expressed disbelief. Finally, it was decided to open the case and inspect its contents. It turned out the visitors didn’t play the servants of the law: from a suitcase jumped a real monster!

His description was later given different someone claimed that the beast resembled a snake with a dog’s head, someone- it was like a scaled dog. The creature issued a disgusting smell.

Seeing the “Goblin” (as it was called in the press), the police instantly panicked. With shouts they began to scatter in all directions. Those who could not get to the door, jumped in the window… in a minute at the station no one left.

Fortunately, accompanying the family of the shaman was confused. He immediately locked the door and the office window where the event occurred, from the inside, caught an “evil spirit” and began a special ritual at the end of which burned a mysterious creature. After that, the police were able to return to their jobs.

Assistant chief of police in Bulawayo confirmed to the media that this case actually took place.

But why police responded to the emergence of a monster? Well, first, it seemed too threatening to people, and who knows what it is to be expected. And secondly, among Africans, a very common belief in evil spirits, including the “Goblin”. Believe in them, and probably the police. It’s not rational Westerners!

Anyway, “Goblin” really existed, but to find out that it was a really failed.

The Ghost of a suicide

In one of the English-language social networking has a story about the clash of the police with an unusual phenomenon.

– Once we were called to the house where one of the tenants, apparently, was not in itself, – says an eyewitness. – At the address we were met by a woman – about 50 years. She cried and said her 20 year old son is under the influence of an unknown drug, the guy flatly refused to enter her own bedroom, saying that there hanged an elderly stranger.

The young man was clearly stoned. However, he told police that communicates with the spirit of a certain girl who strictly forbade him to enter the room where it was hung up by her father. According to the boy, he had seen the Ghost of a hanged man – he was dressed in an officer’s uniform.

– I examined the bedroom and, of course, no of the dead were not found, recalls the narrator. – When I was going to talk about the results of his examination of the mother of a drug addict, I was pulled aside one of our senior officers.

He said he remembered the house and the room. Once there lived other people, and that COP had to take part in the investigation of suicide – older military really hung up, and seems to be in the same room.

The narrator subsequently found the case in the computer database. Indeed, in that house many years ago killed himself a veteran of the Second world war. He hanged himself, dressed in his military uniform. So that “Ghost story” proved to be true.

In September last year a surveillance camera police station Espanola in the U.S. state of new Mexico recorded a strange translucent figure that walked next to the building in a protected area.

Vague silhouette found on monitor duty detective Karl Romero. This surprised him, as when entering a stranger had to trigger the alarm.

– At first I thought it was a fly or moth, then I saw his legs, says Romero. It looked human, but it’s not. It’s a Ghost.

Unexplained phenomena on the territory of this precinct, however, has happened before. Sometimes the police feel someone’s breath, while around them no one.

By the way, the building plot is located in the heart of an ancient Indian burial site. Maybe the Ghost belongs to someone from the local “inhabitants”.