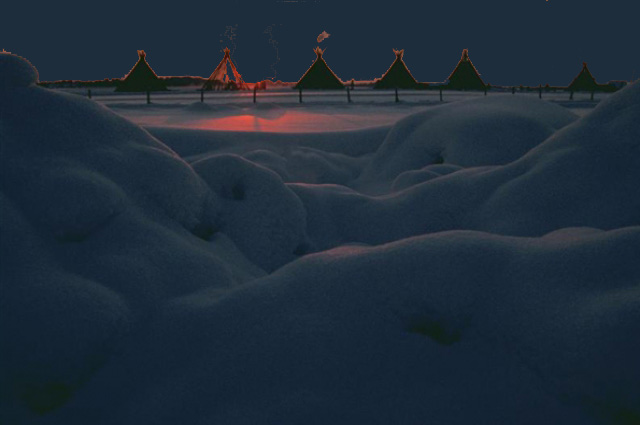 18 Sep 1938, Yamal, scientists observed a surprising and unexplained Eclipse, which then called a “Black day”. An unexplained phenomenon occurred in the North of the Tyumen region, today it is one of those cases that can not be explained either astronomers or specialists in other areas.

Geologists working on the Peninsula, say that in Yamal there was a sudden darkness accompanied by complete radio silence, people are not able to adjust any one station.

Geologists have launched some flares and saw above the ground at low altitude hang sunproof clouds. Imagine what was their density, if running up the rocket went into the clouds and ceased to be visible, and exactly such missiles in the same minute running horizontally were well observed throughout their trajectory.

From these strange clouds subsequently left no trace on the earth’s surface – no rain, no dust. Geologists in the light of the flares were able to determine that the strip dimmable spread of 200-250 kilometers and also moved from West to East. She crossed the southern part of the Yamal Peninsula and captured the Ob Bay.

Witnesses said that an unexplained blackout lasted for one hour. Scientists are still trying to understand the causes of this mysterious phenomenon.

Similar cases were observed to Yamal. May 19, 1780 in the middle of the day suddenly a black cloth was spread to the sky – as described by eyewitnesses. In those days the full Moon appeared only after midnight – blood red, then began to appear stars and the familiar picture of the world returned to normal.

2 June 1802 in the Pacific command of the schooner Eldorado complete darkness overtook the day, completely calm, half an hour later the darkness dissipated. About the sudden darkness in broad daylight recorded information: in 1884, England, in 1886, in Wisconsin and in 1904 in Memphis (United States).

Such phenomena, due to their rarity and unpredictability, it is not studied. A hypothesis for solving this mystery although numerous, but none of them can be checked.

What the science says

This phenomenon in meteorology called “local reduction in atmospheric transparency, and to predict when and where it will occur is impossible. Unlike a solar Eclipse when the darkness of the “black day” is more dense and covers a small area. For centuries this little-known event occurred on the planet only 5-6 times. Possible reasons for sudden black scientists classify forest fires, dust storms and plumes of cosmic dust. The latter was named as a basic version of a “Black day” on the Yamal Peninsula, if not one “but”: any astronomical bodies that day in the vicinity of the Earth was observed.

As shown by historical documents, these “Black days” and had previously happened in different parts of the globe. For example, 19мая 1780 “night” of the day came in North America. “Black canvas” covered the sky all day, and resolved only close to midnight. And when at last the darkness cleared, the full moon was at first purplish-red, but gradually the color changed to normal.

Then this event associated with rage in Canada forest fires. 230 years experts have studied samples of trees taken from the area of the “black day”. As shown by the analysis of the old annual rings was discovered the coal particles and traces of resin, which means that the trees in that period really were scorched by fire. Well, the bloody color of the moon when such phenomenon is explained by the fact that the airborne dust plays the role of a filter, and receivina through the clouds the Moon looks painted in red colours.

“Black day” was recorded 2июня 1802 and in the Pacific ocean when the crew of the schooner “Eldorado” with complete calm drifted half hour in utter darkness in broad daylight. В1884г sudden darkness came in England, and in 1886 and в1904г in America (Wisconsin and Memphis).

Although scientists have been trying to give this unique and extremely rare phenomenon a scientific explanation, putting forward certain hypotheses, but so far a convincing unified theory to formulate failed.