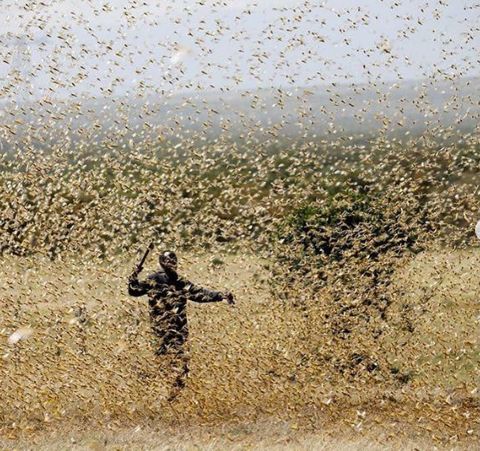 In the Persian Gulf, the authorities of a number of neighboring countries, sparing no effort, are fighting a large-scale invasion of locusts. In early March, disaster also affected Saudi Arabia.

A lot of photo and video materials appeared on social networks, indicating a huge number of insect pests, like clouds overshadowing the horizon and curling in giant swarms.

The massive fumigation of land attacked by locusts has also led to the fact that agricultural land near Riyadh is now covered with a dense layer of dead insects. All the forces of the Ministry of the Environment are thrown into resistance to the pest.

For desert locusts, whose destructive invasion causes significant damage to crops, it is typical to live in secret until weather conditions are in a special combination and contribute to the rapid multiplication of the population and the formation of huge swarms.

By the way, the Indian authorities, who are also seriously facing an “insect threat”, have purchased special unmanned aerial vehicles and modern equipment for locust control.