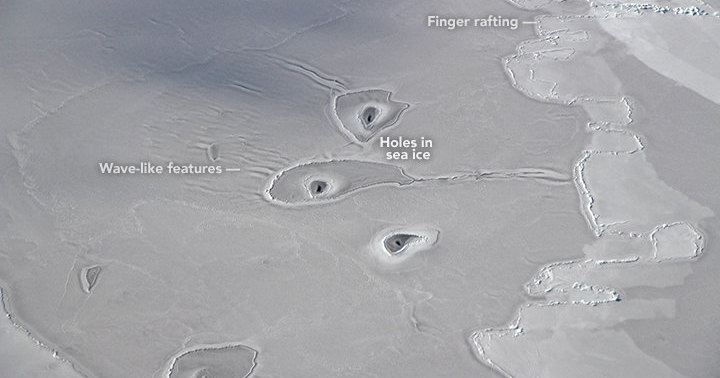 Mysterious funnels, discovered by glaciers flying over the Arctic, are too large for seal holes, and scientists are lost in conjectures about their origin.

NASA does not know where the holes in the Arctic ice came from
Two weeks ago, an aircraft with scientific equipment from the mission of NASA Operation IceBridge flew over the Beaufort Sea north of Canada. The task of scientists was to compare the amount of ice in 2013 and now. Ice was, as expected, less, but in addition, the glaciologist John Sontag discovered something unusual – rounded funnels in ice, the origin of which has not yet been clarified. “We observed these rounded formations on the ice for a few minutes. I have never seen anything like this, “Sontag said.

The ice in which the funnels were discovered was formed in the last season. Such a young ice grows during the winter and covers a relatively thin layer of clear water between the ice – the water. “Most likely this ice is thin, soft, easily crumbling, and this little one is knocked into lumps,” suggests Don Perovic, a geophysicist at Dartsmouth College, “in the center he is formless, and on the sides he stumbles into a structure with a wavy surface, as seen in the photo “Perović notes, according to the jagged layering of ice at the edge of the picture, it can be assumed that at this point the ice collided and formed a serrated relief.The thinness of the ice is indicated by this relief, uncharacteristic of a thick layer of ice, and gray color, meaning that snow on ice lying so little.

This ends the experts’ reasoning. Scientists do not know what could lead to the formation of semicircular or teardrop-shaped holes in the ice. Some suggest that the holes are made by large marine mammals; they do look like seal holes, but too large for them, although it can be assumed that after the formation of a hole, the water from it melted the surrounding snow. It is also possible that the holes were formed without the help of animals, as a result of convection; to the shore in this part of the Beaufort Sea not far away, and warm waters from the mainland could pinpoint thin ice – for example, says Chris Schuman, a glaciologist from the University of Maryland.