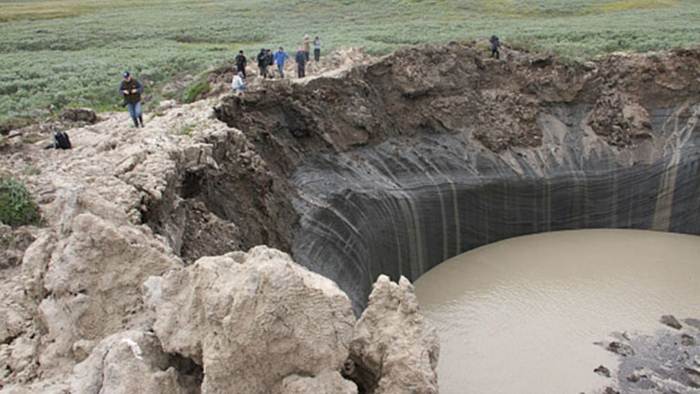 Russian scientists will determine the content of methane in the lake formed on the site of the funnel of the gas release on the Yamal Peninsula in the Yamal-Nenets Autonomous District (YNAO). Studies will help to advance understanding of the nature of the origin of these objects, the press service of the Tyumen State University (Tyumen State University).

“Nikita Fakashchuk, a graduate of the Tyumen State University, who studied in the Geoecology of Oil and Gas Producing Regions, took part in a geocryological expedition to the Yamal Peninsula, taking samples of lake water and ice in the area of ​​the geocryological hospital Vaskiny Dachi and the Yamal gas discharge funnel to determine the content Dissolved methane, “the press service explained.

The expedition with the participation of specialists from the Tyumen State University, the Earth Cryosphere Institute of the Siberian Branch of the Russian Academy of Sciences and the Tyumen Branch of the Russian Geographical Society (RGO) was organized with the support of the Interregional Expedition Center (MEC) Arktika. During the expedition samples of snow, lake water and ice were selected, parameters of the snow cover on various relief elements were measured.

The goal of scientists is to determine the differences in the chemical composition of the water of ordinary lakes and lakes-funnels, for this purpose, water samples and dissolved salts, organic matter and gases are sampled. Part of the snow samples in the thawed form and ice monoliths were transferred to the laboratory of the All-Russian Research Institute of Oceanology (St. Petersburg) for carrying out analytical studies.

Earlier it was reported that the study of funnels of gas emission began in the summer of 2014 immediately after their discovery. The depth of the most famous funnel in the area of ​​the Bovanenkovskoye field is at least 35 meters, the diameter is about 40 meters, at the moment they are completely flooded by rain, thawed rocks, ice and snow.

To forecast possible dangerous phenomena underground, including the formation of funnels, in April 2017 a seismic sensor was installed near the village of Sabetta in the Yamal-Nenets Autonomous District, it will record fluctuations in the earth’s surface and transmit information to the Arktika and the Unified Geophysical Service of the Russian Academy of Sciences for further processing and Interpretation. It is planned that a network of seismic sensors will be installed in the Yamal-Nenets Autonomous District, one device can continuously analyze seismic processes within a radius of 200 km.