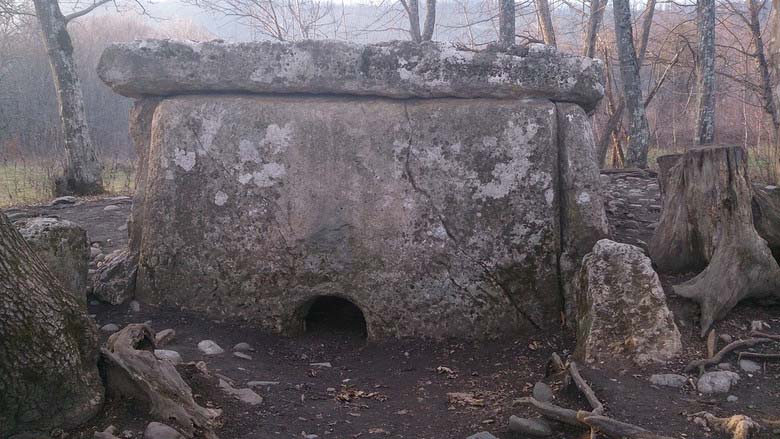 More than five years candidate of Sciences, lecturer of aerodynamics and theory of flight Rostov state University Sergei Gerasimov has been studying electro-magnetic field around the dolmens Kazahskoy group.

Riddles and questions are not long in coming: every time the sensors detect abnormal strong magnetic changes, the origin of which scientists can not yet explain.

Sergei Gerasimov at all sure that the number of mysteries and oddities of the Egyptian pyramids “resting” next to the Circassian dolmens. Your new visit to the homeland of the North Caucasian megaliths scientist planned in early January.

“Actually, about the dolmens scientific world are little known. All the dolmens of the North Caucasus have in common several factors? Megaliths have always been built in the most beautiful places, most often on the middle terraces of the rivers. The portals of all the megaliths always directed to the Sunny side. The dolmen “village 1” is the East – South – East of the dolmen “village 3” is the direction East-East-South dolmen “village 4” is rotated in the direction East – South-East,- said the Chairman of the regional branch of the Russian geographical society Igor Ogai.

According to him, the direction dalmeny portals is understandable: most likely, the builders of the dolmens, as most pagans were sun worshipers. The sun was their main deity.

But how to explain that in some places, clusters of dolmens near the portals, the sensors will detect strong electromagnetic waves, in others – only background, they do not know.

Perhaps no coincidence that the construction of dolmens – the areas with the paranormal, with unusual energy, popularly called “places of power”?

Good grief. Ist that the extent of the whole research into this? What about (archaeo-) astronomical correlations of the site?
Electromagnetism around Dolmens ist far from unheard of (e.g. ‘Carnac’ by André Meréaux from 1981 already tackles with this phenomenon found in the megalithic structures in Brittany). Nothing new under the sun. Only a sure sign that there is so little research that knowledge dissipates far quicker than ‘new’ discoveries are made. Sadly.