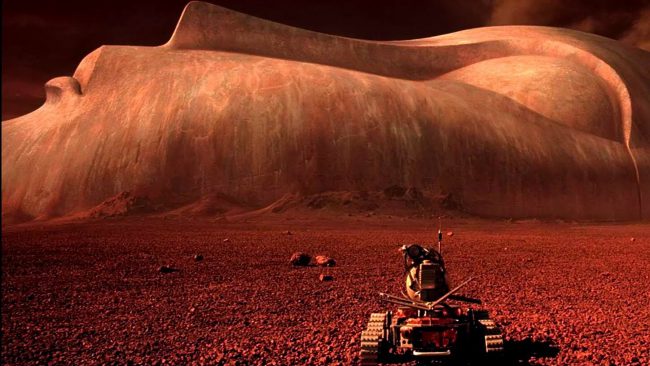 Humanity dreams of Mars and now some countries are working to make manned flight. However, it is possible that people have long been visited on Mars.

Mystery of the Martian satellite Phobos 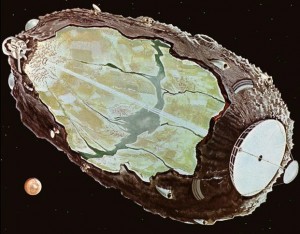 Mars has two satellites, both were discovered by American astronomer Asaph Hall in 1877. He named them Phobos and Deimos, which in Greek means “Fear” and “Horror”. Phobos is located at 9400 km from Mars. He was wrong, not typical for cosmic bodies form, and he, like the Moon, always facing the planet only on one side.

When the European space Agency spoke in favor of the assumption about the cavity of the Martian satellite Phobos, this assumption is quite correlated with the discoveries of the Soviet astrophysicist Joseph Shklovsky, which he made in 1960-ies. Shklovsky not only believed that Phobos is a hollow, he was also interested in its unusual orbit. Scientist even at some point suggested that this moon may be of artificial origin.

One theory suggests that Phobos was specifically placed on such an orbit and in fact is a kind of ancient space station, perhaps used as a starting point for space missions or as a kind of emergency warning devices collision with other space objects, like asteroids. 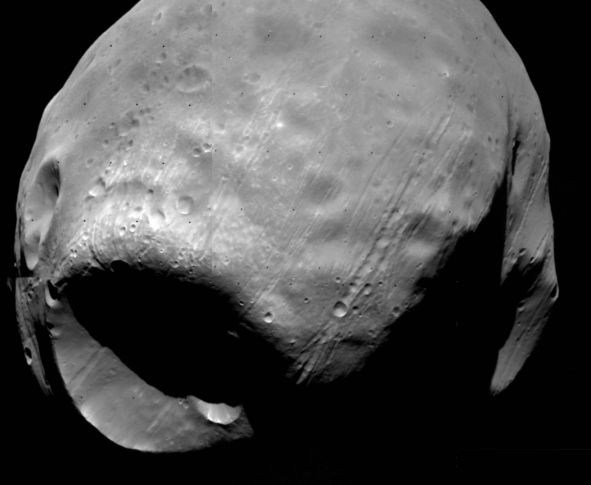 It should be noted that the Phobos was launched numerous space probes, but they all in some strange way experienced with various system failures and out of order that ultimately, of course, led to mission failures. It is possible that all these events prove the artificial nature of the satellite, which remains active and hostile to uninvited guests.

The Sphinx and the pyramids of Mars 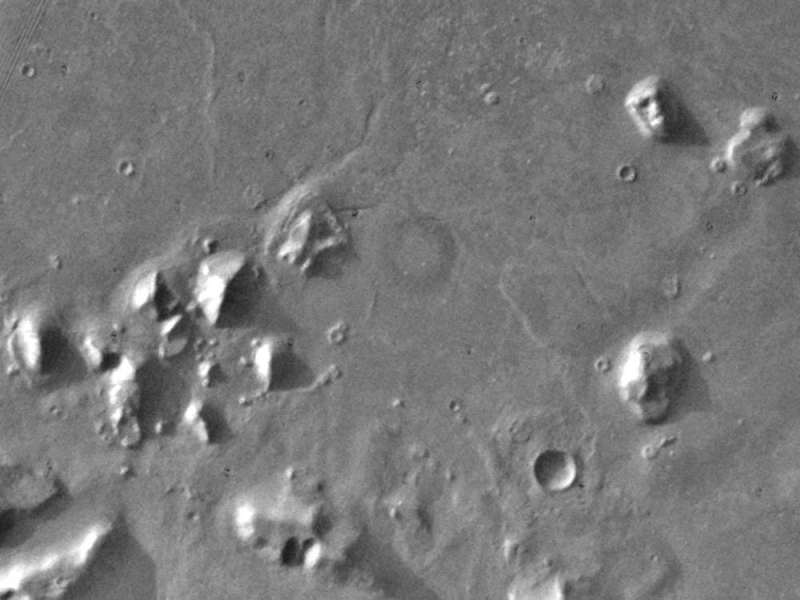 On Mars long ago discovered the “Sphinx”, next to which is the pyramid. Very smooth and clean lines, as well as the size of these facilities and do their construction (i.e. artificially created structures)! The possibility that these objects are volcanoes, too, is unlikely, because astronomers are pretty well studied the Red planet and can confidently say that the only volcanic region of Mars located in the Tharsis province that 3200 kilometres away from the pyramids, which were discovered in a place called Cydonia. God doesn’t make straight lines — supporters of the theories of the Martian pyramids and the Sphinx.

Assume that Mars really is the Sphinx and the pyramids. Do they have something in common with the Sphinx in Egypt and the pyramids at Giza? The capital of Egypt Cairo in Arabic sounds like al kahira, which in turn translates as “the victorious” or, more interestingly, “the place of Mars.” There is evidence that once the Sphinx at Giza was painted in red. And before the alleged pyramids on Mars observed by the increased number of stones. Whether these stones are natural objects? Or they are part of some of the collapsed buildings of an ancient civilization? 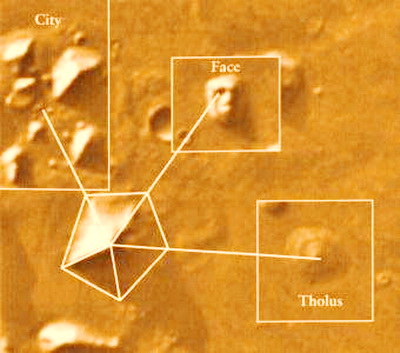 There is evidence that in the 1970-ies was carried out a secret mission for the establishment of a Martian base. After the mission “Apollo 17, the last manned mission to the moon, NASA began to pursue a secret space mission, which was not reported to the public. One of such missions was the project “Red Sun” — the unprecedented joint venture of the US and Soviet Union at the beginning of the colonization of Mars.

The first group of cosmonauts and astronauts arrived at the Red planet in late 1971, and this mission was exploration. The second mission began in August 1973 with the launch of ISV Columbus with two American astronauts (commander Elliot C and pilot William Rutledge) and a Soviet cosmonaut Vladimir Ilyushin.

Rutledge, the pilot of the mission “Red Sun” has provided a video of landing on Mars. Rutledge also spoke about several other top-secret projects, including the one according to which found on the moon base of the aliens. Later, Rutledge made a short statement:

“I leaked it leak. Now that would do NASA and the USAF? Attempt to block its publication or to sue me will be a direct proof of its truth. Now they can say whatever I want, that it was a hoax or a fake.” 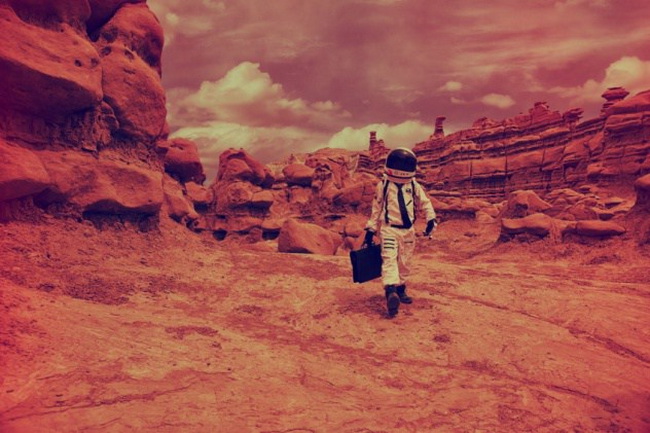 In 2014 one woman, named Jackie, and called the radio show American radio station Coast To Coast AM and stated that in 1979, Mars was visited by the people and that she was a witness to this event.

Jackie said that at the time she worked at NASA and her main job was to receive telemetry from spacecraft. During the execution of their duties, she saw through the live channel, NASA, Mars as the two men are. The woman says that they were both dressed in spacesuits, but not quite in such fat, is expected to see an ordinary astronaut. According to Jackie, people were walking on the horizon in the direction of the Rover “Viking”.

Jackie swore that witness this event along with her 6 other NASA employees. When these people tried to inform everyone else about what they saw and to leave the room, I discovered that the front door was locked, and the window of a door hung with paper so no one else could look at it or log in.

On Mars there is a hidden life 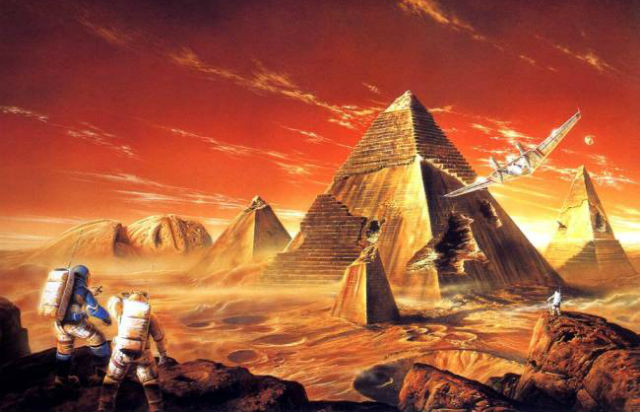 American engineer Gilbert Levin in 1976 proved that Mars had life. He told about the experiment, called “Labeled Release”, which was performed using first the Rover “Viking”. Using methods that have been adopted and approved by the aerospace Agency NASA, the experiment showed the presence of organic life in samples of Martian soil, which were taken shortly after the landing of the Rover. Conducted but at the same time, two other experiment does not coincide with the results of the first, and therefore, the Labeled Release experiment was not taken seriously and was subsequently forgotten.

Despite the reluctance to fully agree in opinion with Levine, Chris McKay, an employee of the Ames Research center at NASA, once said that there is a possibility that the results of two other tests, which was conducted by NASA, could be wrong. He noted that the tests were performed in the Chilean Atacama desert. His part used the same equipment that was used on the Rover, but it did not show the presence of any organic molecules, even despite the fact that it is known that in the Atacama soil contains organic life.

We all came from Mars 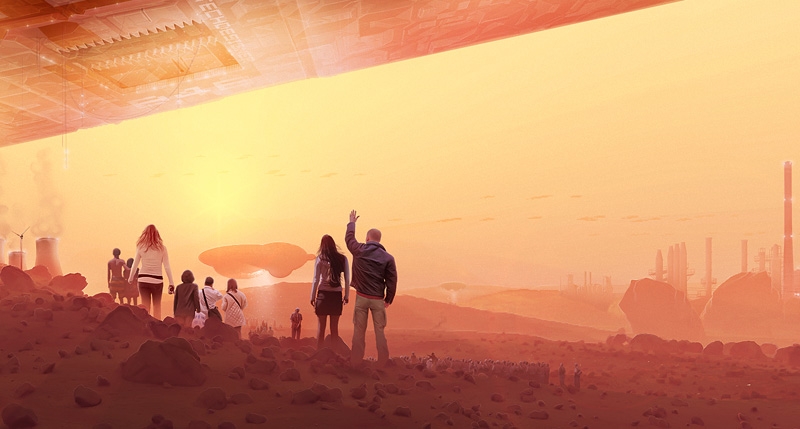 In 2013, two prominent scientists suddenly “endorsed” the controversial theory of panspermia, according to which life on Earth has appeared, and came from another place (in this case Mars) in the form of molecular forms riding on the asteroid, which was populated by these molecules on our planet. Two scientists — one of them Steve Benner, dealing with the nature of life, and the other Christopher Adcock, lead author of the study parsed, agreed in the opinion that it is very, very likely.

The theory of panspermia began in the V century BC, when Greek philosopher Anaxagoras made a link to it, although not in such detail what it is now. She has survived many centuries and reached our days. When in 1984 and 1996, fell to Earth asteroids, which were found organic molecules, the theory of panspermia has regained popularity.

Most modern scholars now agree that Mars was once, billions of years ago, was a completely different planet. He had a thick atmosphere and oceans of liquid water. And perhaps, given all this, this planet could support life. 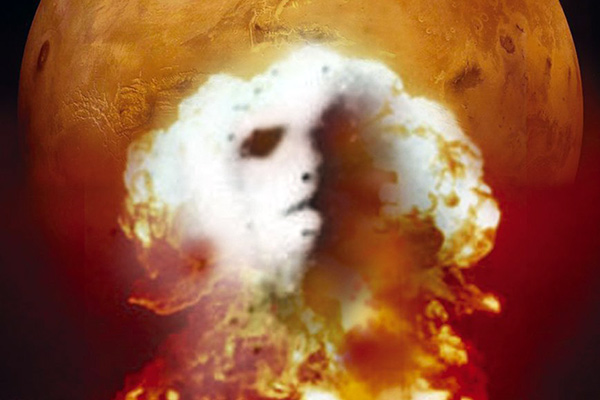 In 2014, the Professor of physics of plasma particles John Brandenburg said that Mars in its history has experienced at least two large nuclear explosion. As evidence of his theory in Mecklenburg-Vorpommern referred to the presence of large concentrations of xenon-129 in the atmosphere, as well as the increased concentration of uranium and thorium in the soil of the planet. Moreover, unlike other scholars, Brandenburg does not believe that these explosions might occur in some natural way.

Brandenburg said that the regions of Kydonia and Utopia on Mars are all signs of an advanced ancient humanoid civilization, and this can be seen most clearly in those places, where once there were various disasters.

Brandenburg believes that the explosions were not of natural origin, but rather purposeful. He stated that he found evidence that, most likely, for explosions they used an atomic bomb a very large capacity. Moving further in his discussion, he also stated that, most likely, these attacks were carried out by another alien race, rather than some sort of organic AI.

The Stargate on Mars 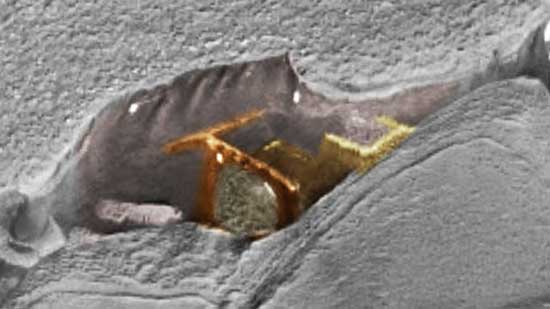 In September 2015, the researchers are analyzing the photographs of the Martian surface, discovered a “Stargate”, half buried under the soil. This is indicated by the very smooth lines of the object. In addition, the picture also noted the “Playground shaped like a part of the long-destroyed the roofs of some buildings”. In the center of the site there was a strange, circular building resembling a gate.

It is worth noting that in the ancient writings found on Earth, often refers to such “tunnels” between our planet and Mars.

Many strange objects on Mars 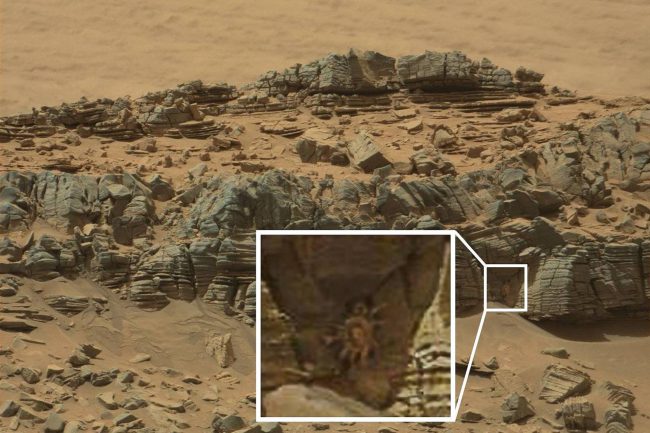 Since space missions “Viking” and to our days the people had the opportunity to view thousands of images of the Martian surface. And although most of the photos of Mars looks like a completely lifeless desert world of sand and stones, some of the pictures you can still see a very strange, mysterious objects. 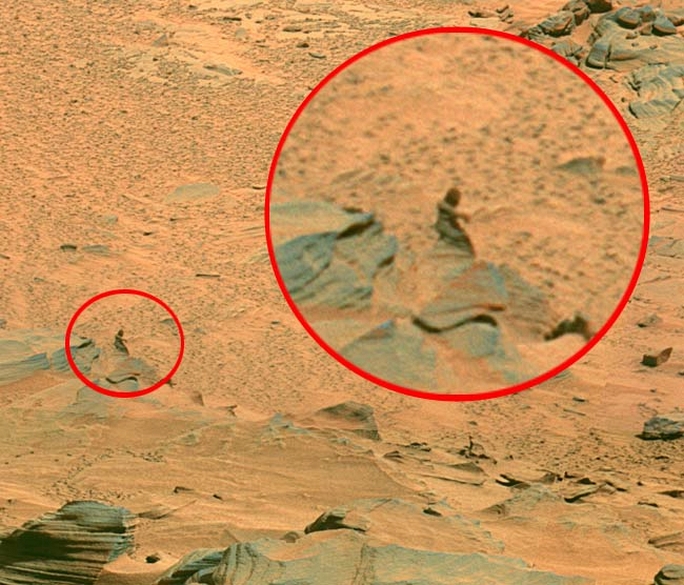 In 2015, for example, there was a photograph, which depicts objects resembling the pillars or even columns printed on them “petroglyphs”, are very similar to ancient Egyptian. In the summer of the same year there was the photograph which is clearly visible to the female figure, located on the mountain hills. 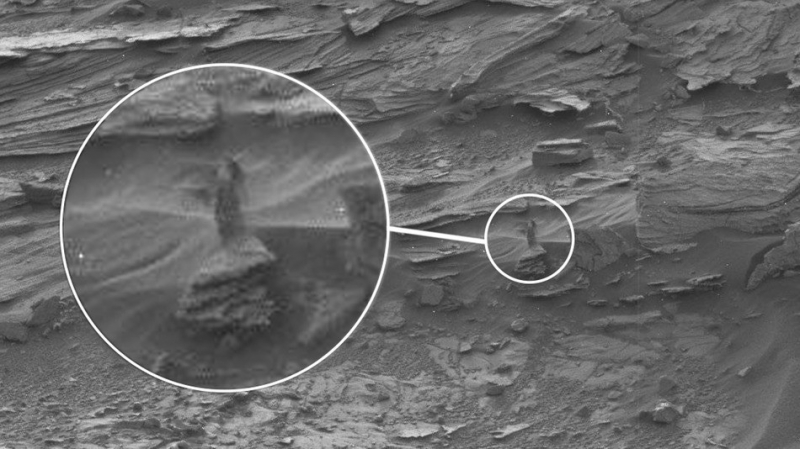 There were many images, which show objects resembling the remains of human bones and even skulls. Visible on other Martian animals (lizards, rats and crabs).