Secrets of the Bennington triangle 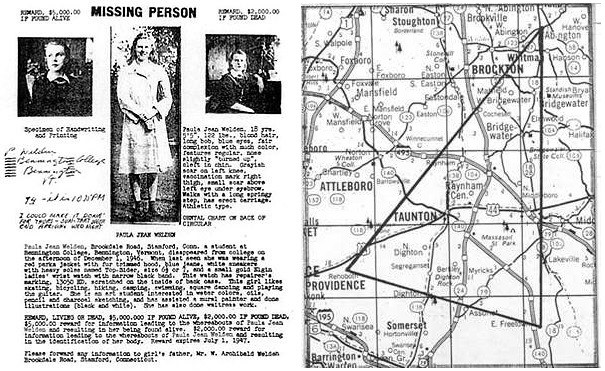 There is in the American state of Vermont, the small town of Bennington, in which the first half of the last century for three decades, was a strange and frightening events. There people are disappearing and they don’t just disappear, it’s like you’ve disappeared into thin air. And although now the town is living a peaceful and quiet life, he still called Bennington triangle similar to the Bermuda.

American writer Joseph Citro in his books cited eyewitness accounts of mysterious incidents in Bennington that occurred from 1945 to 1950. (By the way, the five episodes are documented.)

Presumably the vertices of the black triangle are Bennington, intersection of roads near it and mount Glastenbury. Are placed around the once-booming, thanks to the timber industry, the city of Woodford, Shaftsbury, and Somerset. Today they almost become Ghost towns. Still, after over 30 years in these places disappeared more than 40 people. Only in 1951, Bennington triangle left people alone.

Another researcher of various anomalous phenomena, the writer Carl Hughes, conducted its own investigation of what is happening in a sinister triangle of events. As it turned out, the roots of the problem go away in the XVIII-XIX century. The Indians called this area a cursed place. According to legend, here was the abode of evil spirits. Therefore, the natives believed that living people don’t belong here. They buried their dead there, preferring to give the demons the dead to not touch the living.

According to Indian legend, Bennington triangle once upon a time faced the four winds and started a dispute which of them will be here to blow. The North wind was the strongest, he brought from somewhere and unleashed on the land of the enchanted stone, buried under the other three winds. Since then, in these areas exclusively is blowing North wind, and the stone now lies in here somewhere, but nobody knows where exactly…

Naturally, the white settlers considered it all myths and superstition, but only until such time until people began to disappear.

The first disappearance happened in November 1945 between the trail for hikers of the long trail and the highway. 74-year-old experienced hunter Middy rivers, who knew the area, took these places four men, wanting to hunt. Since then, rivers has not been seen. The searchers failed to find any trace, except for Chuck, somehow trapped at the bottom of the stream. Apparently, the man leaned over the water, then a bullet and fell.

In Dec following, 1946 during a hike on the trail long trail disappeared a second-year student Paul gene Walden. The girl’s classmates saw her leave. Other witnesses — an elderly couple Whitman said the girl was walking about 100 metres ahead of them, then the trail turned to the right.

However, when Withmany also went for the twist of the girl was not there. Father Floors, a well-known engineer-architect, was quite a wealthy man, so when the daughter went back to College, he appointed a reward of $ 5,000 to anyone who can find the girl. First, the search engines assumed that Sex was the evening in the forest and got lost. But a survey of local residents and tourists traveling in the area, nothing given.

However, there were witnesses who saw similar on the Floor girl, only just above her. She allegedly sat in a maroon car at which wheel there was a man.

Who were these men, remained unclear, but the car was found. It was burned down in another state. All of this completely confused the investigation.

One of those who claimed to have seen the Floor, was repeatedly caught in lies and in the course of the investigation in 1946, and in the process of its revision in 1952. Then he became the Prime suspect. But the evidence of his guilt, and the fact that she was the victim of a crime, not found. History has acquired hearings. Some said that Paul lives like an ascetic in the mountains, others that she fled to Canada with a guy.

If the case with Paula still possible somehow to be attributed to a crime, the disappearance of veteran James Tedford shocked the whole neighborhood. In December 1949 the man was returning on the bus home from St Albans, where he was visiting relatives. Fourteen passengers watched as he entered the room and sat on the back seat.

But before the arrival at Bennington Thedford disappeared from the bus just disappeared into thin air. And the bus went without stopping, all the things men remained in the Luggage, and the place where he sat, lay open the pamphlet with the bus schedule.

Next on the list was an 8-year old Paul jepson. In October 1950, the mother took the son with him to the pig farm. Away briefly to feed the animals, the woman on his return found the missing boy.

Despite the fact that the child was dressed in bright clothes, thanks to which it would be visible even in the woods, search parties never found him. The dogs took the trail but in the area of the same infamous highway long trail lost it.

The fifth and last of the documented disappearances also occurred in October 1950. 53-the summer local resident Frida Langer and her cousin Herbert Elsner decided to walk close to the reservoir. Hardly moving away from home, Frieda slipped and landed in the Creek.

Asking his brother to wait, she went home to change into dry clothes. As time went on, but Frida did not return. Then Herbert decided to see what she was detained.

Returning home, he realized that the sister hasn’t been here. In search of was attended by 300 people, and even aircraft, but no trace of the missing women are not found. Only in early may 1951, Frida’s body was found near a reservoir.

But during the search 7 months ago these places were carefully, but to no avail combed by search engines. Due to the fact that after the death of the women took a very long time, the cause of her death has not been established. Frieda Langer was the last victim of the Bennington triangle and the only one whose body was found.

Naturally, all these events became the main subject of local Newspapers. In addition to documented cases, were even statements from relatives of the mysterious disappearances in the triangle. Only the police didn’t hurry to report these facts not to excite the public. Journalists assumed that all the missing people were victims of a serial killer, only in disappearance, there was no pattern. All of the disappeared were of different sex, age and social status.

The only thing that United all the episodes, is the place of the incident. In addition, against the journalistic version of said evidence and witness statements. However, to live in these places is frightening. But when the timber industry went into decline, the city completely empty.

Now in Bennington triangle, dominated by wild nature. They say that the rare tourists visiting the godforsaken place, continue to disappear. However, no evidence of this.

As there is no explanation of the mysterious disappearances. Someone from the researchers hypothesized, based on the theory of relativity. Supposedly in space, there are point, once people are transferred from our world to another dimension. German scientist Hermann Minkowski adheres to the similar point of view.

He believes that space and time can exist parallel worlds. And in the Bennington triangle is a channel of transition from one world to another. Such channels on the planet, according to him, there are 12. They are located on the Ground consistently, with an interval of 72 degrees longitude. Only if the version of the scientist is correct, then why the disappearance of people in these places since 1951?

Maybe the wind finally agreed among themselves?

Um…. the map shows the Bridgewater Triangle in Massachusetts!!