Sinister secrets of the Veps forest 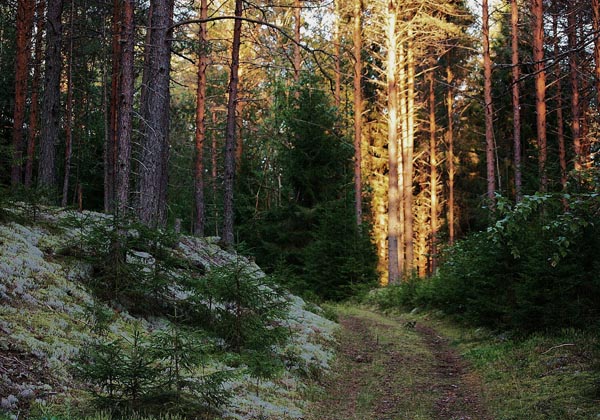 Near Tikhvin, in the area of the Veps (Average) hills (to the North of St. Petersburg), 1993 gone a few dozen people dead, 16 of them were discovered in the forest without a trace of violence.

The VEP rise is located between St. Petersburg and Murmansk is one of the most sparsely populated areas in Russia. Circle of thousands of kilometers stretches of the swamp. It is here at certain times of the year — from April to October — people disappear.

According to the chief Kaplinskaja police Department Anatoly Boytsova, victims of an unknown plague losing my mind. They are partially or fully exposed, clothing was often found folded in the baskets for mushrooms or she lay in the pound. The mouths of some were filled with liquid mud of the road. The impression that someone or something forced the poor to pour out of the baskets collected trophies, to take off the linen is disgusting “ground cereal”.

Here are just a few illustrative examples. In the fall of 1993 was found the body of a watchman of a sawmill. The corpse is naked, clothes thrown next bulk, like someone shot her in a hurry. Some of the buttons from the shirt had been torn off and lay next to the clothes on the ground. Cause of death by experts not established.

In autumn 2001, two local residents went to the bogs for cranberries. They parted, one went missing. Two days later his body was found. The berries are scattered, clothes folded in the basket.

In the same year, at the end of October found the body of the mushroom. Sat barefoot on a tree stump, the mushrooms from the basket thrown on the grass. Boots with attached socks they stood.

The locals blame the evil force that is clouding my mind lonely travelers and kills them in a forest thicket. By the way, the Fighters, and he adheres to the similar point of view. “I think the answer could be found by the scientist, not the lab. There is in all these cases a kind of hell.”

Attempt of a scientific approach

Sergey Nikitin, chief specialist of the Moscow Bureau it is judicial-medical examination, claims that the reason for unusual behavior of people went to pick berries and mushrooms, could be the penetration of their body of certain toxic substances, causing high fever and clouding of consciousness. Victims of unbearable heat tore their clothes, their intolerable thirst, so people in trouble tried to suck wet dirt…

According to experts, the seasonal nature of deaths with mushroom suggests the defeat of the animal or vegetable toxins. In fairness it should be noted that their corpses were not found. But this fact does not refute the assumption. Really — after all the bodies found immediately, and got into them the toxin could easily inaktivirovanie. The cause of death of people in the woods, Nikitin considers, herbal or animal (plant, mushroom, snake).

Sergei trifonovich-senior research fellow Institute of pharmacology, doctor of biological Sciences believes that to blame the plant — rosemary marsh. It emit into the atmosphere provides intoxicating effects of essential oils. When a person for a long time on the site is overgrown with rosemary, he begins to feel dizzy, and his legs are made of cotton and it becomes difficult to go.

Meanwhile, this toxic flora in a large number grows in Siberia, Transbaikalia, and in some areas of Central Russia, and from there messages about naked bodies was not reported. It is difficult to sin and the mushrooms, as the source of intoxication. All the victims in the majority were local residents and were well distinguished between edible and poisonous mushrooms. In addition, almost possible that some of them decided to try their raw trophies in the woods or in the swamp.

According to Edward Kolosovsky, candidate of medical science, cause of death — infrasound. Veps swamps are located in a geopathogenic zone, has not been studied by geophysicists and geologists. In connection with increased solar activity and the emergence of a large number of elementary particles (the solar wind) produces acoustic vibrations including infrasound and low-frequency. In addition, the source of the infrasound can be the sound of the thunder, storms and winds.

When exposed to high intensity infrasound observed the feeling of causeless fear, dizziness, respiratory failure, spatial disorientation and weakness. From the effects of infrasound intensity 180 DB (frequency of 7 Hz) for 15 minutes the body is injured. And further effects can come a lethal outcome (death).

In several publications, given the facts, when the command ships in the Bermuda triangle during a storm, thrown overboard for no apparent reason. And all of them before it was inexplicably stripped! (The same happens on Veps swamps). It is proved that one of the reasons was the impact of high intensity infrasound during a severe storm.

Why it is still not established the cause of death of people on Veps swamps? Apparently, infrasonic vibrations are selectively a narrow band in a short time, and under their influence get one. The exact answer can be given physics, equipped with accurate instruments capable of detecting infrasonic radiation.

There are experts who think that the loss of life in the forest is associated with snake bites. However, in the Leningrad region, as is known, found only one representative of the creeping reptiles — adder. But its toxin does not lead to the previously described effects. Other reptiles that inhabit our woods, fields and swamps, not poisonous.

And here begins the most incredible! It turns out that in Veps the swamps, people have long been faced with volatile snakes. Here, for example, told P. Sergeev. In the summer of 1949 he was a student, worked in the surveying party of the Leningrad Gidrotorf in marshy tracts at the junction of the Volkhov and Tikhvin districts of Leningrad region. 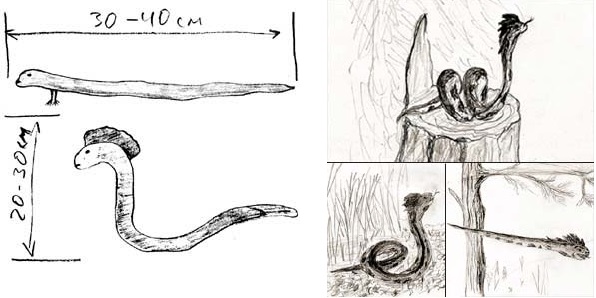 Tikhvin flying a kite. The figure of the witness

“For the first time the story of the “flying reptile” I heard the old man Savely Ivanovich Ivanov from the village of Zavode, where we were based. Meeting with “the bastard” took place in the swamp thirty years ago (i.e., circa 1920).

Externally, the creature was something like a grouse, the body moved in a snake’s tail. It rose from the grass and rushed on the person. Frightened, Ivanov ran away to the woods, threw off his sweatshirt. When he next day went missing, I found a sweatshirt “all in the green” snakes “made”. We listened, hiding his smile: well composes grandfather!

However, later, spending the night in the villages Emolove, Zagorje, Poddube and others, I was surprised listening to the same stories of old people about a “flying snake”, “flying reptile” that they had to meet in the swamps themselves, to hear about the stories of their loved ones.

“Well, swamps should also be its own romance, its own legends, I thought, especially since they are so large (reaching 60-70 km in length and 30-40 km in width Podsobno-Kosatsky Moss, zelenetsk Moss and others)”.

But here is the information of Vladimir A. Oleneva, who graduated from the three courses of the Leningrad forestry Academy, worked all his life in the woods for the posts of Forester, chief Galskogo of lesopunkt, a person worthy of trust. In 1959, the deer said that he had seen this creature, and even killed him.

It happened in the 1930-ies. One day, when Cody walked through the woods with the dog, on the edge of the swamp she suddenly barked angrily “beast”. Olenev saw grass flew “grouse” and flew over the dog who in fear ran to the owner. Olenev grabbed the axe and, defensively, put it toward “the bird.” Split shot the creature fell to the feet of the man, and soon calmed down. From beak oozing a greenish liquid.

Vladimir Alexandrovich has long been dead. His friends say he lamented that didn’t bring this dead bird-like creature, no doubt of interest to science.

Currently looking flying creatures do cryptozoology enthusiasts from research companies “Labyrinth”. After a total survey of residents of the Tikhvin district, they drew a portrait of Gad. Ilya Agapov, member of the Russian geographical society and the activist of the “Labyrinth”, said the head of the snakes males have a knot, resembling a rooster’s comb. These unusual creatures as they can easily climb trees and can soar high in the sky.

By the way, the evidence about seeing flying snakes exist in local folklore. So, in the collection of L. S. Vasiliev “Tikhvin little stories about snakes. Experience of review/Tikhvin folklore archive. Studies and materials, St. Petersburg, 2000” States: “If it is the rush — grab yourself anything from clothes and throw her. While it will deal with a rag — you’re on the run. When flying reptile will realize the mistake and once again become the haunt you — another thing throw. Sometimes, people out of the woods naked in running, all tore off!”

Very probably, the victims adhere to the recommendations! Too bad it didn’t work…

In fairness, I should say — of the flying serpents tells not only the folklore, there is one documentary evidence. One of them was caught in 1942, the red army General Vlasov (he had not yet been declared a traitor to the Motherland). The soldiers shoved the reptile into a wooden box and decided to transmit the wonder of researchers. But during the fierce fighting about him safely forgotten. Most likely, he has died, left without drink and food.

According to local residents, after the Second world war, a mysterious creature almost disappeared. Perhaps due to the fact that forests began to be treated with herbicide in order to eradicate low-value tree species. With the beginning of perestroika chemicals to apply stopped, and the snake appeared again.