Strange events in the Gulf of Mazaredo in Argentina 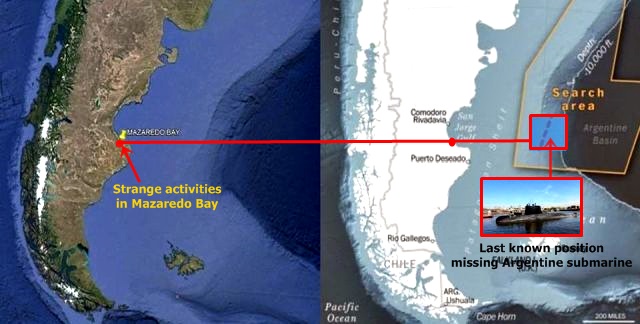 An astonishing statement came from a witness who had experienced a very strange encounter near the Mazaredo Bay in Argentina on December 2, 2017.

The strange event was so overwhelming that the witness was forced to report a meeting at the UFO organization Mutual NFO Network, including detailed satellite images showing the area where he encountered a very unusual event. By the way, the Gulf of Mazaredo is in front of the last known position of the Argentinean submarine “San Juan”.

We arrived at night and spent the night there. Early in the morning we went to the sea (4 miles), we decided to go on foot to take photos.

During the trip we walked by a canyon (a small canyon) 150 feet or less high, and then on its slopes saw some strange apparatus with the symbol of an orange circle with a line passing through it on its board, people dressed in translucent clothes, three 30- foot towers and one large cone-shaped apparatus. 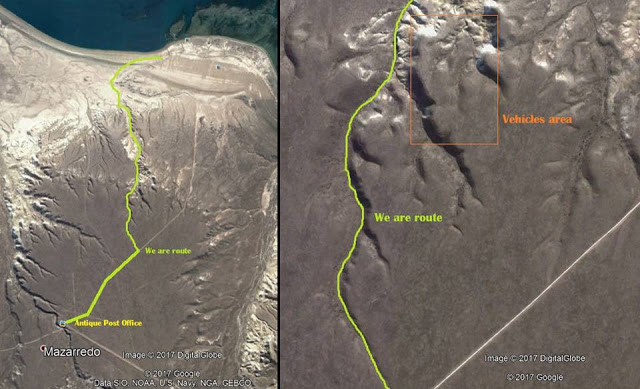 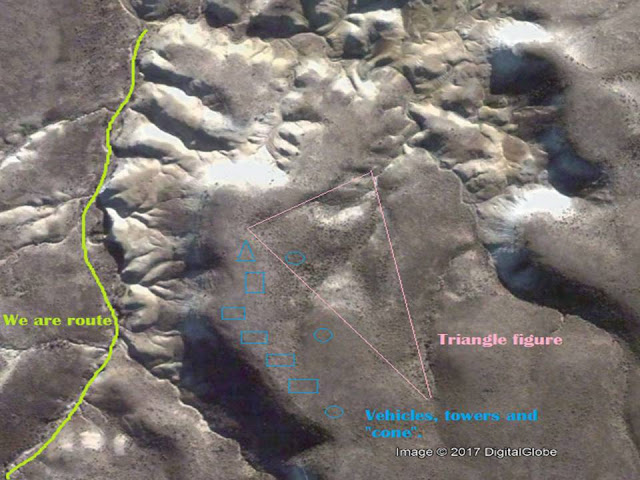 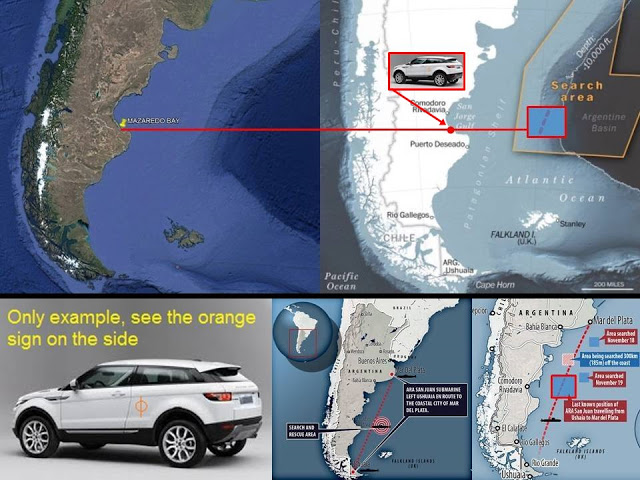 The latter pointed to the sea, and erased an eerie sound, a kind of buzzing, real unearthly song, for almost ten seconds we could see a flash pulse towards the sea horizon, and then from there something was responding from the sea, again and again.

These strange people saw us, and we waved our hands to say hello, and they did the same.

When we came to the coast, we saw two men, they approached us and began to say: “Hello, are you here to see the old post office?”

We said “yes” and they said: “You need to see the last telegraph point, there is a bronze tablet with information”, and then they said in what direction we should go (1 mile from there).

We asked them about the unusual vehicles and towers that we saw, as well as about the strange cone, they said: “We are looking for something, this is a scientific material, important for us.”

For the next three days, when cars and people stayed there, we saw them ten times, but we never approached them closely.

After we left, we looked at the photos we made, we shot both people and strange phones in zoom mode, but they all were spoiled. At the same time, we did not receive any harm to health and our cars were also in order.

Coincidence or not, but the Mazaredo Bay is opposite the last known position of the Argentinean submarine “San Juan”, which disappeared in the Atlantic with 44 sailors on board in the morning of November 15, 2017.

The navy said that the ship’s captain reported a short circuit after the water entered the submarine and that a battery malfunction could explain the chain of events that led to the submarine being flooded by an explosion on board, or maybe an Argentine submarine was used in a similar Philadelphia experiment, given the strange events in the Gulf of Mazarredo?

Who are these people and why are some of them dressed in almost translucent clothes? Are the aliens involved? What is the use of strange orange symbols on strange vehicles? To whom do they send a flash pulse and who responds to the flash?