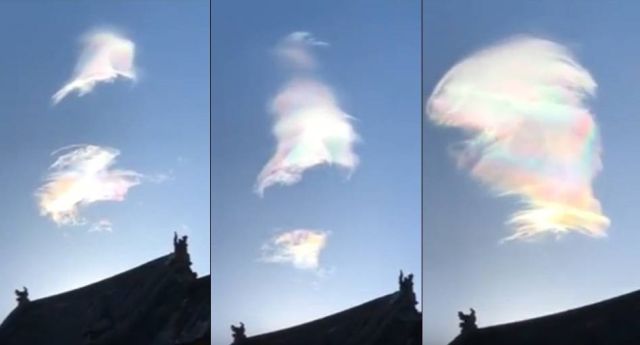 Mount Wutai – a sacred Buddhist territory in the upper Qingshui in Shanxi Province, China. Its central region is surrounded by a cluster of flat vertices. The northern peak (Beitai Ding or Yedu Feng) is the highest (3,061 m), and is also the highest point in northern China.

Wutai is often called “the first among the four great mountains”. It is believed that a bodhisattva often appears on the mountain, taking the form of ordinary pilgrims, monks or other images most often depicted in unusual five-colored clouds.

December 19, 2017, in the sky against the background of the sacred temple appeared very strange rainbow five-color clouds. Then the clouds began to swim, change shape until they got the shape of what looks like a bodhisattva.

Bodhisattva – in Buddhism, a creature possessing bodhichitta, who has decided to become a buddha for the good of all beings.