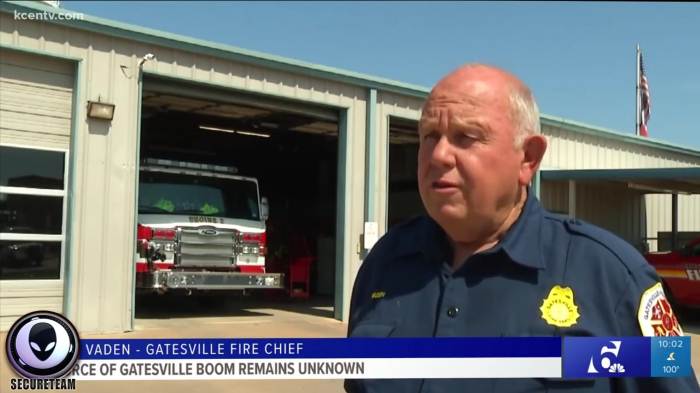 August 17, near the town of Gatesville (Texas, USA) there was a strong hum, which caused great excitement among local residents. The authorities could not explain the origin of the noise. The sheriff of the county Coriell inclines to the variant of an airplane flying too low, but there is no information about the flights at that moment. One of the first information about incomprehensible noise was reported by the fire department chief Billy Waden. He received several reports of noise, but he could not find out his source on his own.

“There was a very loud sound in Gatesville,” Waden says. The windows of the fire station trembled violently. It was the loudest sound I ever heard. We checked the data on the known aircraft, but found that in this area no flights of jet planes were planned. Afterwards, several messages from local residents arrived at once. They reported that they felt a noticeable vibration in their homes. ”

Waden said that the Gatesville police are searching the whole city, but so far they have not detected any signs of smoke, or traces of the possible fall of any cosmic body. As it became known later, a strange roar was also heard in the districts of Bosque and McLennan.

Edna Ward, one of the witnesses of the event, commented on the situation: “It was really scary,” she said. “I was in the hospital.” But a second later she went out into the street, like others, to understand what was going on and what was happening. We did not see smoke or anything like that. It calmed me down a little, but I still would like to know exactly what happened. After all, the sound was really very loud. ”

However, this story is not over yet. According to a spokesman for the Gatesville Police Department, the investigation is ongoing and it is possible that very soon new details will be revealed that will explain what happened.