The anomalous zone of Khakassia 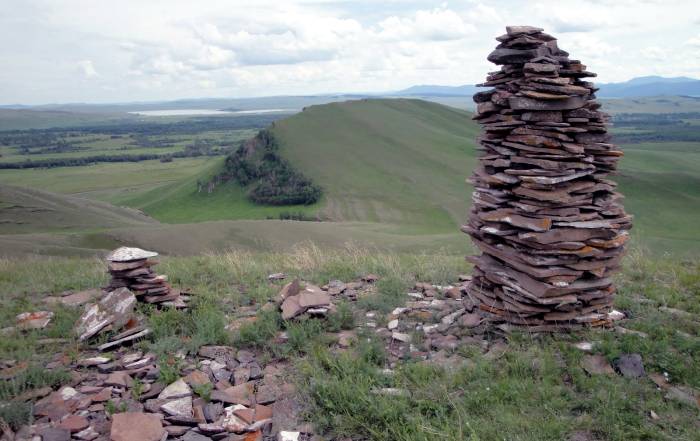 Khakassia is one of the most mysterious regions of South-Western Siberia. The region is rich in so-called Places of power that were known to mankind since ancient times. This term denotes a particular point on the Earth who have a very strong impact on the human psyche.

In earlier civilizations (and many scientists believe that we are not the first civilization on the planet) these places had a special significance, they were considered a kind of energy regulators that have a charitable impact on people and the environment.

People were able to identify such sites and erected buildings there, is able to increase the strength and power of this place: dolmens, menhirs, etc. In these Places of Power are temples, and if you trace it back historically, we can see that the new temple was built, as a rule, on the ruins of the old.

Places of Power are in almost any country. Today we will tell you about the place of Power in Khakassia. The Republic of Khakassia is located in South-Western Siberia, on the territory of Sayano-Altai plateau and Khakas-Minusinsk basin. The ancestral religion of the Khakass people – shamanism, which has survived till our days.

One of the most mysterious places of Khakassia mountain ridge Chests. There are many theories about the purpose of this place. Some historians believe that this is an ancient Observatory, others that it is a platform for the landing of alien ships, and others – that it’s just a place of worship…

What would be the point in the future prevailed, has objective data with which you cannot agree or disagree because they just are. So, here are some of the oldest on earth solar hours.

There are cave paintings of ancient people, which, incidentally, can be seen humanoid figures in clothing, painfully reminiscent of the space suits, and a mysterious area with perfect acoustics where even a whisper is heard for several tens of meters.

The study of the ridge the Chests are engaged many scientists, including astronomers, who are inclined to believe that the ridge is an ancient Observatory, because in the recesses of the rocks at certain times you can see the constellations, which are set up a particular rock.

Locals tell and show the place around one ridge, where in Soviet times was dug up a mysterious stone. Found it by accident: plowed field and drove his tractor the grave of a shaman. On the stone was a picture of the constellation of the other hemisphere, and some stars visible only with a telescope.

Near the Chests is a valley of spirits. For locals it is a place of worship, where you can plunge into parallel worlds and navigate through a time continuum, as in the past and in the future. Before they could walk only shamans or initiates.

The following geopathogenic area of Khakassia is the menhirs, which are free-standing stone sculptures, which are near about five thousand years ago, sacrifices, religious rites and other mysterious ceremonial actions. The menhirs have not been studied until the end of the phenomenon, which still contains many unsolved mysteries.

According to Khakass research Institute of language, within the Republic of Khakassia the location of the menhirs are located in a geopathogenic zones associated with fault zones of the crust. Geopathic zones are areas of the earth’s surface, emitting a hitherto unknown science the flow of energy.

Typically, the width of these zones varies in the range of 10-50 meters and a length of hundreds of meters, and in some cases miles. The form and force of impact geopathic zones are divided into two types: high frequency (negative), when the vector of the measured field are directed fan-shaped (in these areas negatively affects the human bio-field, which ultimately leads to disease), and low-frequency (positive), which shows sinusoidal curves of the biolocation effect, the direction of the vector field measured in one part of the anomaly is fixed vertically downward, the other upward.

In these places there is an alignment of the human bio-field, which contributes to its healing. In this place are Large gates, which are located in Ust – Abakan area two kilometers North-East of the Great Salbyk Kurgan.

Dowsing studies conducted in the same Khakass research Institute of language, it is revealed that these monoliths are installed in the low-frequency geopathic zone, which has a width of about 23 metres.

Dowsing anomaly in this place has a sinusoidal form and intensity of 450 conventional units. The menhirs set at the line of inflection of the curve. The stone on the right side (if viewed from the South) there is a recess in the form of the human body.

The recess formed by the friction of people of stone coming here for thousands of years for treatment or for performing some ceremonial rituals.

On the face of the monolith engraved Tamga in the shape of a human body with three rays emanating from the head. Everything indicates that this Place of Power was used by ancient people to eliminate certain ailments.

If you go further, you will come to Salbyksky Mounds. This is a very famous place, not only on the territory of Khakassia. It is also known as the Siberian Stonehenge. The mounds are located in the valley of the Kings – a huge natural bowl surrounded by mountains. There are several dozen large earth mounds, eight of them with a height of over 10 meters.

Fences the largest mounds there are more than two dozen stone stele up to 4 meters and weighing up to 60 tons. In the center of the Valley of the kings – the Big Salbyksky barrow. Huge stone slabs dug into the ground so thoroughly that it seems no force them not to budge.

It is a colossal rectangular structure, the sides of which are composed of huge blocks of stone protruding from the ground at the same height. Interestingly, the upper part sloping to the East. To install them in that order these days, it would be necessary to use special equipment!

Around Salbyksky mounds are observed very strong geomagnetic anomalies. Many people visiting this place then told that when they stood in the center of the Big Mound, I felt powerful column of energy and vibration all over her body to your fingertips.

But here, in the Republic of Khakassia as a sacred place and a place of worship is considered to be a stone statue of an old woman with rudely embossed face, bulging belly and Breasts. This place is called Ulug-Khurtuyakh-TAS, which translated from the Khakass means stone woman. It is believed that this statue helped childless women: contributed to desirable pregnancy, and healed of female trouble.

Curiously, the Stone old woman, childless women pray for the appearance of children in our days, pour it with milk or buttermilk and convex, roughly sculptured face with a large mouth and belly coated with lard or sour cream.

They say that the old lady should not hear anything that happens next, but once a woman commits around it three circles, the statue comes to life. Locals claim that this is not a fairy tale and that of Ulug-Khurtuyakh-TAS really helps people.

At the foot of the Ulug-Khurtuyakh-TAS was cleared and sprinkled with river sand Playground, which includes 14 sculptures of Pets. Bulls, horses, sheep were made of river pebbles and red Sandstone. From this collection there is only three figures.

However in Khakassia there are geopathic space with positive energy, but also with sharply negative. On maps this place is called Kalkulacka cave.

Place and at the same time extremely interesting and challenging animal terror. About this cave is known all over the world, it is officially included into the five of the most frightening places on the globe.

Scientists who study anomalous phenomena, call it the cave of the black devil. Name Korculanski cave gave one of the peaks of the spurs of the Kuznetsk Alatau – koskulak are. From Shira village to her a little more than 20 kilometers.

Without an experienced guide into the cave to go down very dangerous because the descent is vertical for about 300 metres tall. And to reach the cave is not so simple: the taiga to the mountain on foot as no transport will not reach.

Kalkulacka cave has long had a bad reputation. Often people disappear in the void of the cave of the black devil. A few people after going to this cave went crazy, some committed suicide.

Almost all the witnesses keep saying the same thing: they felt as the animal’s sense of horror and saw the black shaman calling them. Local passed on from generation to generation, the legend that in the cave was killed by a shaman. And now his soul thirsts for revenge.

Also among the locals there is a legend that Kalkulacka the cave was the ancient nation a place of cult. Here, the Gentiles not only worshipped the phallus as a symbol of fertility and procreation – in the place of a natural stalagmite in the shape of a phallus, around which preserved the ancient fireplace.

Here, according to legend, the ancestors of the Khakass people worshipped the black devil sacrificed to their gods, including human. In favor of this legend says extant ancient altar.

Who believes in this legend, says that the cave over the centuries absorbed the dark energy of ancient shamans, who protect its secrets, spills from time to time in prying the guests of the cave.

But the stories of the Khakas shamans, the cave is the entrance into the womb of mother earth. In the cave you can perform the rite of rebirth: to introduce yourself a little-a little egg, and then try to be born a different person, with the qualities which you would like to have, and all the negative to leave the old life.

Of course, it should be done alone, but preferably with the help of the shaman. In this cave we can’t go in with bad thoughts, fears. She will return your feelings: everyone sees and feels it is exactly what is in himself.

The cave is associated with many scandals. So, in 2000-2002, this place was the subject of cult worship a fickle group of Hindu Shaivite priests led by Swami Sathya SAI Daas, who founded here a monastery of the informal – SAI of Lingeswara Ashram, which translated from Sanskrit means the Abode of Truth and universal well-being and peace.

For them it is a place of interest as a natural temple. According to the brahmanas, the place it was stated above as sacred and requires care and protection from destructive human influence.

After three years of struggle with the negative attitude of the local administration and the population of neophytes was forced to leave the place. But still conduct rituals here Khakass shamans and Russian sorcerers, trained among the esoteric.

Scholars interested abnormal events occurring in the cave, and began to study it. Established a laboratory there and this is what found: in Korculanski the cave there is a source of low frequency pulses. But to find the source of them and failed.

After examining the record came to the conclusion that the signals recorded on the Kalkulacka, no relation to natural have. Pulses of this frequency with a stable amplitude can generate only artificial emitter! Who installed it, when and for whom are these signals? It is possible that someday we will know the answers to these questions.