The curse of Loknyansky glade 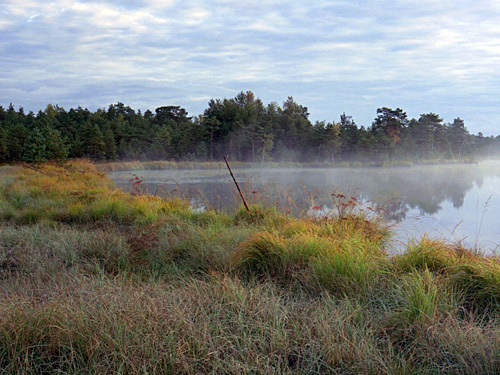 On Earth, we can distinguish such anomalous zones, which are constant or regularly operate geoactive or other “triangles”, where the usual poltergeist, energetically active zones, etc. it is Very rare to speak with confidence about the reasons and time of occurrence of a particular anomalous zones. Mostly all the talk about them being based on stories or legends, which they are usually enveloped.

The generally accepted theory which could explain the presence of such zones does not exist, humanity does not even know their exact number, as well as the mechanism by which they act.

There is a similar area in Loknyansky district of the Pskov region of Russia. Pskov is not only historical sights. At least, if not more, famous Pskov places, which tell of stories and legends. And now not understand, where truth and untruth, everything is so intertwined in a tight knot.

In this case one can say for sure: the more you study the folklore of this region, the clearer you understand that almost every village in the Pskov region related to mysticism. And so with the story of Loknyansky clearing (or, as it is called, the Cursed glade), stories which excite the imagination.

They say that for the first time about this phenomenal place began to talk even before the Second world war, when two of the village boys sought together with the shepherds and the lost cows, out on the meadow, saw a few cows of their herd suddenly blazed bright with fire and fell to the ground.

Guys in horror rushed to the village, in paints telling about what they saw. And then the grandfather of one of them remembered that he had heard from his grandfather about the huge funnel, which was supposedly swallowed by humans and animals, bringing terror to all living nearby.

Legends, which then began to tell about this place, were one worse than the other: it was said that just below this hopper there are unexplored passages, which pass under the ground in the whole Suite of rooms, in which live strange creatures. These beings kidnap children.

They say that in the brightest summer day on the meadow is thick with fog, and it flashed some strange shadows – whether people with dwarfism, or animals.

Legend has it that anyone who has ever visited the clearing Loknyansky never return home. However, sometimes some of them come back, but after a few years, absolutely not similar to they observed a retardation in speech, memory lapses, etc.

The locals prefer not to mention in conversation that same clearing: the people developed is a belief that if you long to talk about it, then it might happen – someone will die. Most often the one who is too much talking about her.

And these fears are not groundless: for the past fifty years the village, only some sixteen kilometers from the district center, is almost extinct. And the worst thing is that many died with their boots on.

Then suddenly in a local river, rather a stream that is not that deep, and he even geographical names-no, drowned thirteen-year-old son of the foreman of the farm, then, podsovyvaya horse received a fatal kick in the head by the village blacksmith, died of wounds inflicted before a tame bull, milkmaid-Udarnitsa, then fell, patching the roof, and was fatally injured by the cutters of homes, died from unknown diseases before strong men and women.

Ominous rumors of a local phenomenon went a long time ago, since the accident, when the eyes of the boys lit up the cow and fell to the ground. But the old man began to tell the young stories about the oddities of the clearing Loknyansky much earlier.

According to rumors, many centuries ago (the scientists were able to find out for sure – in the sixteenth century), on this very spot stood a huge beautiful castle (actually a big princely house), which has long lived the family of one of the famous Russian boyars. The house was surrounded by barns, stables, corrals for cattle. There was a kennel and stables. There were a lot of slaves serving their masters. Lived and lived…

And then one day, before the reign of Ivan the terrible, broke out very strong storm. The lightnings flashed, the earth rolled the thunder. At some point several dozen lightning bolts simultaneously struck in the princely house.

Eyewitnesses passed on from generation to generation, that the earth shook, opened up and all the numerous buildings together with people went underground.

Appeared a huge pit, the bottom of which it was impossible to see the same funnel on which the old grandfather told the frightened boys seeking cows.

As the years passed. Bad clearing overgrown around a thick layer of vegetation, trees and bushes are so heavily intertwined with each other in one fence that go to the clearing, axe just opened this hedge.

With the funnel closed, there’s nothing more failed. However, in a clearing there is another danger: all who are on it for some time, parted with life.

Most of the “spell” field suffering animals that wander into her, feeling rich and succulent grass. Apparently, this vegetation contains some mystical substances: animal, tasting her, never leaving this place.

According to local residents, the meadow itself is never far from his “prey.” Animals that perished in Loknyansky the meadow, over the years did not decompose, but their meat had acquired a reddish color.

Pets, it is not clear why the dead in a clearing, surrounding villages hardly pulled out from the glade and were buried nearby. And birds and other wild animals lying in a clearing, so no one cleans.

Around the glade as if formed a kind of anomalous field. Over time, this dead it began to expand, taking up more space. She came to the little village nearby. Then and there began the strange death of residents.

Yes, and their behavior began to change. Apparently, glade and fascinated the psyche of these people: they have literally every day in the village was fighting for no apparent reason, killed the cattle, a fire broke out.

Many people tried to run away, live a normal life, and most importantly, without fear. But they all say that, departing from the village for several kilometers, as if some unknown force drove them back to the house.

And the fields at this time continued to select for themselves the next victims: it is said that not only the villagers knew about the incredible ability of Loknyansky clearings to lure prey to themselves, but even distant neighbors began to pass the area by.

However, not everyone managed to avoid the deadly traps: some still fall into it, and remained in the clearing.

Some succeeded, though with great difficulty, to pull from the field to bury. They say that their bodies had absolutely no wounds. We can say that all of them died of horror, or fear, it looked like their faces after death.

After increased activity, which continued for several years, the anomalous area was quiet. Loknyansky the clearing had turned into a meadow, and the locals quickly forgot about her sinister nature. But it has taken several years and the dark forces again began to molest people and animals.

However, this clearing brought the inhabitants of the surrounding villages and many benefits. During the great Patriotic war the Germans occupied the village, although nearby were fully occupied. The Germans have been through it and completely forgot about it.

To study the phenomenon of Loknyansky of the clearing came a few expeditions, but none of them came home in full force. In 60-ies only one expedition returned from the field at full strength.

What’s happened to them, the adventurers were silent, but all of them for unexplained reasons hair fell out, they were tormented by severe headaches, and one girl from head to toe was covered with small, match head, sores, and eventually died at a local hospital from an unknown illness.

To the same year belongs a new outbreak of anomalous activity zones: some nights over the forest in the sky flashed the rays, hitting right across the meadow, and in the afternoon above the village arose bizarre mirages, bringing terror to the local residents.

Sometimes at night the watchmen that were guarding the farm flock, noticed that the sky moving points of light-stars, of which from time to time poured silver rain – a shower of sparks that faded into the night sky, never reaching the ground.

Around the clearing were tall grass unusual poisonous shade of green, and the channel of a small river without a name is completely dry and repainted in some weird green color.

Even insects have avoided these strange thickets, and only the wind lazily over the grass, but the sun was trying to burn out this unearthly vegetation.

But the biggest horror of the inhabitants of nearby villages experienced when the spring floods washed away the local cemetery. It turned out that there is a very long-buried corpses not only rotted, but even kept his clothes.

As time went on… Most of the people still found the strength and moved away. The village is completely empty and only abandoned houses now remind about those who lived here.

However, the notoriety of the clearing Loknyansky still dominates the minds of adventurers, who come here and different parts of the country, to understand the mystery of this mysterious place.

However, many of them still find it your doom, and not solved the mystery of this eerie place: an adventure of this kind without special training, as you know, dangerous.

They say that this meadow, called the “meadow of death” exists in the Krasnoyarsk region, near the village of Karamyshevo.

Scientists are trying to explain the anomaly of electromagnetic resonator, creating clearings of this type of powerful vortical flows that come from space.

They expect that under such glades are vents paleovolcano, which rests on the earth’s mantle, as the conductor of powerful electromagnetic radiation.

All living things in the area of the clearing exposed to the magnetic field of the planet. And since the human body is a good conductor – hence the red color of the meat from the victims of the glade is the result of broken capillaries.

Other scientists believe that Loknyansky Polyana – a “textbook” to “node of the earth’s crust, similar to the “devil’s hole” near the site of the Tunguska meteorite fall. It supposedly blew up.

This node is characterized by a powerful gamma radiation that can break down the deuterium present in the blood, and give blood in the atomic hydrogen…

As a consequence, a stroke, blockage of blood vessels of the brain, as in humans and warm-blooded animals and birds.

Animal meat remains bright red because it does not oxidize and can be preserved for a long time, as the microbes, it seems, is also prone to killing these deadly rays.

Maybe scientists are right, but no amount of explaining can keep the human fear that the common man seems strange and unknown.