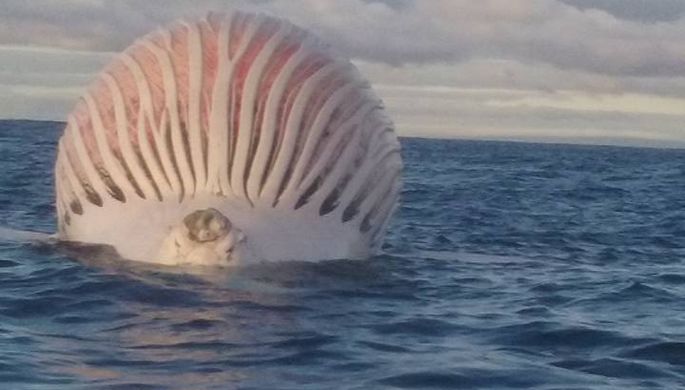 While sailing in the Pacific ocean, two fishermen found an unusual round object and thought it was a huge balloon or even a spaceship. Upon closer examination, it was found that a dead whale whose body swollen.

About the incident told mark Watkins on his Facebook page, posting a photo.

We realized it was a dead whale, when smelled, ” said mark. The whale is not officially defined.

Watkins and his father traveled 50 km from Bunbury (Australia). They found a huge ball floating on the surface. Swam closer, they considered a bloated carcass of a dead whale. His body was swollen because of gas, which is extracted animals after death. When the fishermen swam, the shark had already bit through the thick skin of the whale and the gas come out.

Scientist Andrew David Thaler said that the swollen corpses of whales can burst and cause lots of trouble seaside town.

The smell of corrupting whale – the worst smell in the world, ” explained the Professor. When sharks are unable to pierce the skin of this animal, dead whales drift through the sea until they sink to the bottom. It is known that the decomposition of the corpse of a whale can take up to 30 years.