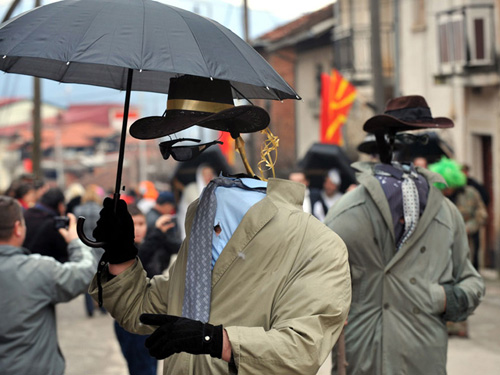 For several centuries, they are mentioned not only in fairy tales and legends, but also… in the accident reports and police reports.

With stealth we are mostly familiar tales. They can wear the magic hat, enchanted cloak or take a drug and no you will not notice. The question is, whereby the person becomes invisible, cleverly disguised series of adventures of the invisible hero.

Meanwhile, invisible for centuries are not only in fairy tales and legends, but also… in the accident reports and police reports. And this is the reason for a serious conversation in an attempt to answer how this happens contrary to the laws of physics?!

In 1876, in the Chinese Nanjing there was a terrible panic in the city there were invisible demons, lost people traditional braids. In vain the citizens closed the head hands, trying to save her hair…

The attack took place on the street in front of dozens of witnesses. More precisely, in front of witnesses the man disappeared pigtail like in the air dissolved. But the one who cut it off, no one has seen ever.

After a while the panic spread to Shanghai, then to other cities. The panic lasted about three years. Meanwhile, the events 1876-1879 he was not the only appearance of strange evil spirit of the Chinese Chronicles recorded the before: invisible, shearing hair, was known in China in the era of Wei dynasty (477-517 BC)

Strange and shocking events in China, once overshadowed by an isolated incident that occurred three years earlier, in 1873, and not in China, and in Menomonie (Wisconsin, USA).

Standing on the street next to the mother of the girl suddenly felt someone astrigal her hair and they disappear. Neither she nor the witnesses of the incident to prevent hooliganism (as it was then thought) had failed.

And in 1890 the invisible evil spirit moved to Japan, and mass panic swept the country. The situation was aggravated by the fact that if China invisible only cut hair, Japan was stabbed in the neck. The length of the cut was about an inch (about 2.5 cm). To die will not die, but still somehow unpleasant!

European Newspapers wrote about it with a condescending irony: Asia, that you take it! The London daily mail, for example, with humor described how in Lahore Indian coolies are convinced of the existence of mumii – invisible creatures that prowl and enough people on the streets.

The humor vanished in 1922, when mass panic caused by stealth, there in London. There is an invisible hand cut the hair of young girls. And no one could explain how in broad daylight in a major European city, people have suddenly disappeared from the head of hair.

Began to receive information about the mysterious wounds. So, on April 23, 1922 newspaper the People published a report from the hospital Charring Cross in London, received 16 APR patient with a stab wound to the neck.

He could tell just how turned off Coventry street, received a wound and fell on the sidewalk. After a few hours in the hospital got a second patient received the same wound. Finally, on the same day another man inexplicably was wounded at the same intersection.

This would not be surprising if it were with the victims was at the time of receiving the wound, at least one person. But, according to witnesses who were in the distance, there was none!

Historical data suggests that the meeting with the mysterious invisible took place in the history of mankind in all ages and in many countries. The Russian Chronicles tell about the appearance in 1092 in Polotsk the invisible, kill people in the streets and mass panic.

In the end of XX century in the Western press there were messages about a whole village of invisible men living in Indonesia. They are called orang Bunyan (translated from Malay hidden people).

Stealth live deep in the woods and have supernatural powers. Sometimes they kidnap children. Apparently, their time flows differently: there have been cases when stolen earlier, and already grown children had returned home, but none of their relatives were already dead, or they were already old men.

The border with place inhabited by orang Bunyan, Malays noted large boulders. Here come those who asks them for help. Bring food and other gifts and turn to invisible, to solve their problems. Sometimes the problem is actually solved, what belief in invisible people is getting stronger.

Visited Indonesia, the Europeans cite numerous evidence of the existence of the orang Bunyan: the sound of drums rang out on the empty meadows, the appearance and disappearance of food or utensils, the movement of the transparent silhouettes in the rain, etc.

Sometimes invisible beings behave truly badly. Thus, in 1761, five women from the Italian village of Ventimiglia returned home. Suddenly one of them screamed and fell down dead. Her companions came to the indescribable horror of what he saw: it seemed that some terrible force in one second killed the poor.

Her clothes and shoes were ripped to pieces and scattered around the body. On his head was the gaping wound, in some places even exposing bone of the skull. The right side was ripped and the insides fell out.

The sacrum is fractured, and the head of the fibula as if pulled out of the joint. Most of the internal organs were flattened… it looked as if the woman was a victim of sudden silent explosion.

A similar story was published on 8 December 1831, the new York times. It was the story of the captain of a German ship Bresee about the strange incident during a storm, when his eyes inexplicable was wounded sailor. His head suddenly appeared a wound 4 inches long, and he fell unconscious on the deck.

Published in 1860 a Narrative of the extraordinary events that took place with the children Mr. Richard Jayla describes the cases of various stealth attacks on children in one family. Once the invisible man left on the face of one of the children the bite marks. Another time, witnesses saw a terrible sight: the invisible hand strangling the girl.

Later other children of this family were also the victims of attacks by stealth. One day, during a single evening five witnesses saw someone invisible 20 times biting their hands… but they’re in no way able to do this because all this time we are continuously being watched.

Examining these bites, we found in them traces 18 or 20 teeth. On the surface of the wounds was smeared saliva, the contours of which clearly indicated the touch of someone’s mouth to the child’s arm. The surface was wet, very wet, and it smelled terrible.

Something similar happened with the 20-year-old South African farmer Jimmy de Bruin in 1960 the Invisible man disemboweled him for several days in a row. Police witnessed Jimmy suddenly screamed in pain and his legs appeared wounds.

The next day, in front of two police officers on his chest appeared a deep cut, though the shirt remains intact. Wounds in different places on his body there are several days in a row. They were neat, if done with a razor or scalpel.

In all cases, stealth attacks on people, there is one common item: the wounds appear on the body under clothing, where there are no traces of cuts or punctures. A satisfactory explanation of the phenomenon invisible is still not found.

However, in 1092 G. Russian chronicler had no doubt that the invisible hand inflicted the wound – the essence of uyazvleniya devils.

However, there are other versions. The most popular – that invisible live beside us in a parallel world. One of those who shares and actively promotes this version, is a researcher of the paranormal Magnus Skarphedinsson from Reykjavik. In his collection of more than 700 testimonies of those who had contact with the invisible.

Interestingly, invisible in Iceland is also called the hidden people. On most certificates, they come to the rescue when someone gets in trouble (ready to pull the fallen from the gorge or lead the lost from the forest). When dealing with ordinary people they can become visible – and then look like humans, though their clothes look like medieval.

Skarphedinsson argues that the invisible come from a parallel world only when we need them. Somehow does not fit with the cases, cutting the hair in China or England…

Another point of view: the existence of stealth due to the fact that life in the Universe may take a variety of forms – including consist of so rarefied matter that the human eye is unable to see her.

In the 60-ies of the academician V. Kaznacheev, dealing with issues of Biophysics, suggested that in addition to familiar to us belovolova forms of life on the planet can be represented by some energy structures that are invisible to the human eye.

And again it is not clear why the representatives of other forms of life to remind myself frankly bullying?

Whether the phenomenon of invisible people to unite phenomena of a different order? Ie the invisible man who attacked with a knife, is a completely different invisible man than the orang Bunyan and those who come for help from a parallel world or consists of other forms of matter?

In 1998, American Newspapers published a curious story. Several teenagers Minneapolis were engaged in thefts in supermarkets. They were detained and handed over to the police. At the station they were interrogated, all except one girl – Jennys.

She had no one paid attention, though she was not. Jennice at first surprised, and then quietly left the station. Later, she talked on this subject with his accomplices – and those, too, confirmed that she some time became invisible.

This case became a starting point for research psychotherapist Donna Higbee. She gave the announcement with a request to report incidents, when a normal person becomes invisible. The response was not long in coming.

A woman from Ventura (CA) spoke about the situation when I was at the post office and tried to draw attention to themselves – but no one had seen or heard. Another woman from Roanoke (TX) announced that she had fits of invisibility in the restaurant and the airport. Another Texan from wrote about how suddenly disappeared for others in the cinema.

Letters with similar stories came not only from USA but also from other countries. In 2001, during the inauguration ceremony of the George.The Bush next to him suddenly appeared a man. He had no invitation, but the security personnel did not see him until, until he shook the President’s hand.

The Russian press wrote about a student of St. Petersburg University. When he stole all the money, he was forced during the month to travel by train without a ticket. But supervisors and fellow travelers did not seem to notice it! A month later, when the issue of money is settled, the invisibility disappeared.

These examples refer to the phenomenon of a completely different order – that people somehow can block the visual perception of yourself to other people. It’s something akin to hypnosis, but can occur unexpectedly invisible. This view is confirmed by the study therapist V. Isakov.

This version would explain the aggressive behavior of some invisible beings, who, using newfound supernatural abilities, could enjoy his power, scaring others.