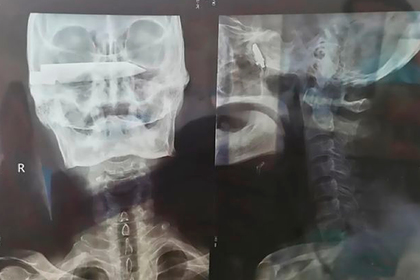 In China, doctors operated on a man who was 26 years old with a knife in his head. It is reported by the newspaper The Daily Star.

The 76-year-old farmer said that the criminals thrust a ten-centimeter knife into him during a robbery. The blade was too close to vital organs; only a very highly qualified surgeon could remove it. In the hometown of the Chinese, none of the doctors undertook a complex operation. As a result, a 26-year-old man lived with a knife in his head, escaping only with painkillers.

In 2012, two visiting surgeons became interested in a difficult medical case. On examination, the patient found loss of vision in the right eye and almost complete paralysis of the limbs on the left side. Doctors took the farmer to a large hospital in Shandong province.

The operation, which was carried out in two stages, was developed by otorhinolaryngologist Van Ziron and deputy head of the hospital Van Baodun. A whole team of specialists worked on the treatment of the patient, including ophthalmologist Dan Guangfu.

On April 2, during a two-hour operation, the surgeons safely removed the blade from the patient’s head. Six days later, he was again placed in surgery to clean the wound of contamination. At the moment, the patient is recovering under the supervision of doctors and can already walk independently. According to doctors, his headaches went away and his eyesight in his right eye returned.

“I used to be unable to laugh, yawn or cough. Doctors gave me a new life. Now my nightmare, which lasted more than 20 years, is finally over, ”said the farmer.

Earlier it was reported that in the Chinese province of Henan, an eight-year-old boy lived for about six years with fragments of a sewing needle in his neck. During the seven-hour operation, the surgeons were able to safely remove a foreign object from the patient’s neck.