The mysterious crash of a UFO in Dalnegorsk, Russia

In the city of Dalnegorsk (Primorsky Krai) in the evening at about 20.00 hours on 29 January 1986, more than twenty random eyewitnesses have seen flying spherical object, which was moving parallel to the ground. UFO glowed red and went with a speed about 15 meters per second.

But seconds later disaster struck. The object fell at an angle of 60-70 degrees on Limestone mountain, located in the city and known as height 611.

According to witnesses, the machine, before it crashed into a mountain, several times jerked up and down. Then the UFO silently exploded and burned for hours. Five days later, on 3 February, arrived Dalnegorsk field expedition of the far Eastern branch of the research Committee on anomalous aerial phenomena of the Academy of Sciences headed by doctor of Sciences and well-known seaside UFO Valery Sturdy.

Expeditionary unit, surveyed the area, found a site 2×2 meters with traces of high temperature impact. Fragments of rocks on it was covered with black film with traces of a tint, and the ground – black ash.

Found the remains of burnt wood, turned into porous coal is not characteristic of a typical forest fire. On the wall cornice and in the ashes were found the metal drops, black glassy particles of up to 30 mg, and unusual loose scaly particles as a kind of mesh. The mystery became more intriguing… 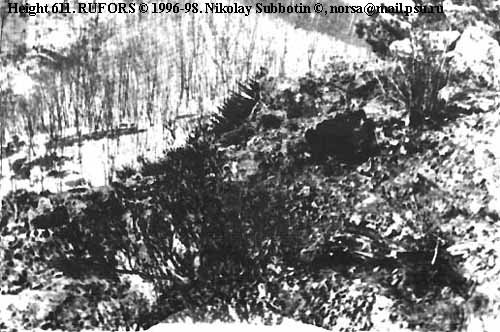 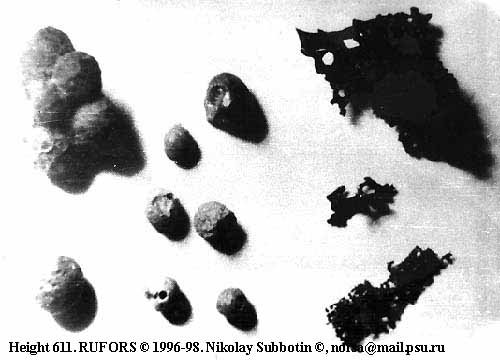 Study of the samples was carried out at the Tomsk Polytechnic Institute and the Leningrad branch of the Institute of terrestrial magnetism, ionosphere and radio wave propagation, USSR Academy of Sciences. Analysis of balls showed that the isotopic composition of lead is evidence of its earthly origin. Moreover, this composition is identical to samples of Cholodkovskovo deposits of Northern Baikal.

Specimens of the iron balls had a very high degree of hardness. They could not be cut with steel tools, but they yielded only to diamond. According to experts, the sample was a drop of alpha-iron. In addition, the composition of the balls included almost the entire periodic table: iron, manganese, Nickel, molybdenum, silicon dioxide, cobalt, chrome.

With vacuum melting, at temperatures above 1300 degrees, the ball turned into a melt, spread on a tantalum substrate.

In the film, scientists unexpectedly discovered the elements and the mesh and glass.The most mysterious discovery on the height 611 was a thin mesh, samples of which are made of yarns of inert metal, which is a complex alloy.

Chemists clutched at the head: the mesh consisted of amorphous carbon materials with separate metal atoms. In that it consisted of carbon, zinc, silver, gold, lanthanum, praseodymium, silicon, sodium, potassium, cobalt, Nickel, yttrium, alpha-titanium and many other elements.

It’s funny that at a temperature of 2800 degrees Celsius, some elements disappear, but instead of them appeared new. For example, when the vacuum heating of gold, silver and Nickel disappeared, but out of nowhere climbs molybdenum sulfide and beryllium. Incidentally, the latter five months later, all has disappeared. In one of the sample mesh scraps of the finest, 17 micron quartz fibers, which, in turn, consist of even finer fibers twisted into a rope.

Recently it was found that in these fibers are woven into the same thin… gold wire. Experts conclude: this technology is impossible, even with the current level of technological development. Doctor of chemical Sciences Vladimir Vysotsky confirmed: there is no doubt that this is a sign of high technology and not an example of natural or terrestrial origin. Completely unknown to researchers material proved to be glass – translucent yellowish droplets

Since then many years have passed. But the crash still affects people. It is noticed that the height 611 adversely affects the blood – causes a decrease in leukocyte count and an increase in bacteria. In addition, Lime increases blood pressure, quickens the pulse, there is an inexplicable fear. The crash also acts on the photos – illuminates the film and photographic paper.

Perhaps the reason is the impact on the soil of ultrahigh temperatures (from 4000 to 25,000 degrees Celsius) and the radiation of unknown nature. .

And another mystery from Dalnegorsk UFOs. Collected on mount silicon samples have magnetism. But magnetize silicon – the same thing that magnetize a brick!

Almost two years after the disaster in November 1987 in the area of Dalnegorsk noted unusually high activity of unidentified flying objects. Only one day in five administrative districts of Primorye were 33 registered object. They had different forms – cigar-shaped, cylindrical, spherical – and moved absolutely silently.

Fraud in this situation is impossible, because eyewitnesses of the mass invasion of UFOs were more than 100 people – workers, intellectuals, policemen, military. The flight of the objects was accompanied by a powerful 2-minute interference and malfunctions in the TVs, on Telegraph lines and other equipment. Wedge the computers were kept in files and programs are hopelessly spoiled.

According to experts, the cause of the problem was a powerful electromagnetic field that emerged in the area of the UFO. 13 of 33 UFO flew directly over Germany. Surprisingly, the objects it is interested in the crash – they hang over the hill and covered it with powerful searchlights. And in January 1989, local ufologists and casual observers recorded a UFO landing just 200 meters from the crash site.

Of the mysterious objects suggest that they were conducting a search of the crashed device or its investigation on the incident. Since then, for thirteen years, and the skeptics and the optimists are making many attempts to explain the Dalnegorsk UFO.

Was made a huge number of assumptions – from the frankly stupid to scientifically validated. But not a single person could not convincingly prove the terrestrial origin of the object that crashed January 29, 1986, at the height 611. And it is doubtful that even the intervention of the FSB or the FBI will be able to give a specific answer.

In General, the truth is still somewhere near…