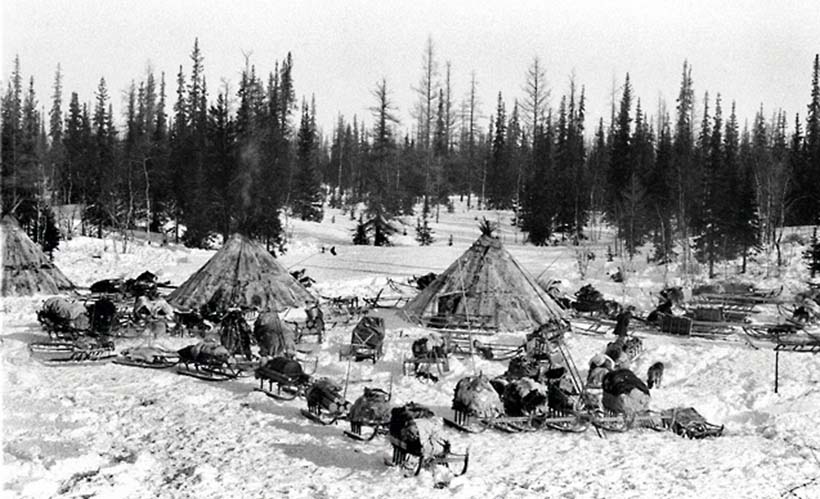 The mystery of the disappearance of the inhabitants of the eskimo village Angikuni (Canada) still dominates the minds of people who are interested in mysteries of our planet, although more than 80 years. This incomprehensible phenomenon to this day have not found any rational explanation.

12 November 1930, canadian hunter Joe Labelle (Labelle Joe) traded furs on the shore of lake Angikuni. The lake has long been famous for fishing in abundance vodilas trout and pike, and the surrounding woods had a lot of fur-bearing animals. That’s why this remote and rugged terrain has attracted hunters and fishermen.

But not everyone dared to go after prey about the area anciently went grim legends. The old-timers told us that the lake was inhabited by evil spirits, which from time to time to remind myself to local residents. But it was the twentieth century, the legend was gone, and life went on as usual, and the hardiest of hunters have arrived in this remote corner of Canada. Among them were Joe Labelle, who more than once drove back from the lake with a rich booty.

He knew the area and always before the way back stopped to take rest and warm up in a local fishing village, which, like the lake, was called Angikuni. Locals from the tribe of Inuit were very friendly and welcoming, always ready to feed and warm the traveler.

The hunter was very tired and cold as November was frosty. Labelle barely reached the village and went to the first house. The furnace was melted on the table stood a pot of still warm stew. But the house was empty, there was dogs in the yard. Hunter went to a nearby house, then another, and another…He walked around the village, but everywhere was the same strange picture — not a soul, but the feeling that people left the house just before his arrival. And left in a hurry, throwing things.

But the strange thing was that leaving the home, people didn’t bring no weapons, no warm clothes, no food supply. Indeed in these harsh lands never left the house light. The second inexplicable part was that around the houses there was not a single trace of the people. But the tracks were clearly imprinted in the snow.

Hunter, in spite of the mortal weariness, was so awestruck that did not stop in abandoned village. Sight suddenly and mysteriously deserted settlement was shocking. The horror gave the hunter forces, and he was able to perform a journey of several miles to the nearest liaison office. When they reached the Telegraph office, Labelle reported the incident to the canadian police.

After a few hours, a detachment of mounted police reached the village Angikuni. On the way they were joined by another three hunters stranded near the lake. Admand Laurent and his two sons, having heard from the police about the incident, said that yesterday witnessed a strange phenomenon.

Two days ago while parked, they noticed the sky unseen glowing object that moved slowly in the direction of lake Angikuni. He changed shape, taking the form of a cylinder, a pointed spindle. The hunters claimed that a glowing object was unlike anything they had seen before — it could not be either Northern lights or a cloud, nor any other atmospheric phenomenon, characteristic for these places.

Police arrived on the scene carefully surveyed the village. They found several strange and sinister details that escape the attention of the exhausted and frightened, Joe Labelle. The local cemetery on the edge of the settlement was devastated.

Without exception the graves were dug, and the bodies of the buried had disappeared. It could not be the handiwork of local people — the Inuit cherished his dead, and disturbance of the peace of the cemetery was ancient taboos. But it is a ruin could not do and animals — grave was dug neatly, funerary stones were stacked in neat rows.

Another gruesome discovery was waiting for the police a few hundred meters from the village. They found under the snow the bodies of sled dogs, which, on preliminary examination, died from hunger. It seemed incredible. Because the abandoned house was full of food. And the Eskimos have always thought sled dogs from his main wealth, and probably would starve themselves than give them to starve to death.

This inexplicable story became the sensation of the year, Newspapers around the world are vying to put forward new versions of what happened. The official version of the canadian police does not suit anyone. It says that a tribe of Inuit, guided by some practical or religious beliefs, decided to migrate to another Parking lot. But this does not explain any of the mysteries of the disappearance of people. Why are they not seized items, weapons, food? Why are they allowed to die dogs? Why not left any traces?

A rational explanation for this puzzle could not offer one. The most common hypothesis was the opinion about the kidnapping of Inuit aliens. As unlikely as it sounds, but only such a hypothesis is to make ends meet. Only she could link the disappearance with the appearance on the eve of a strange flying object that no one has ever seen in this area, either before or after a mysterious accident.