The mystery of the disappeared crew of the US Navy airship 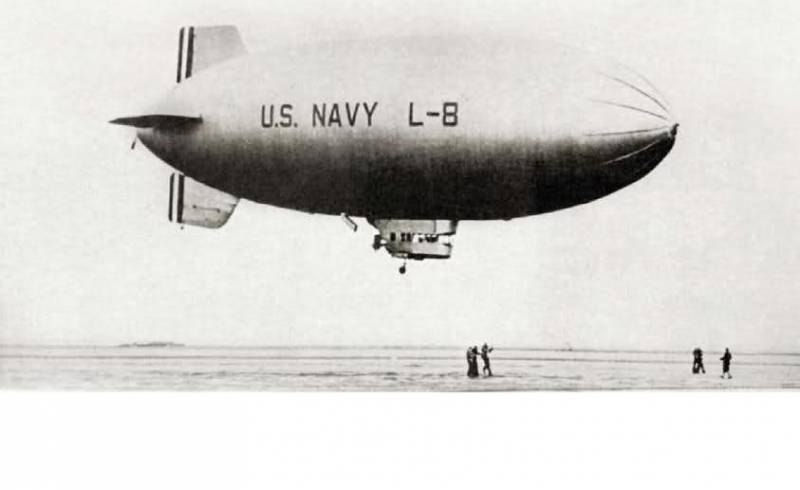 Disappearing in war is not difficult. Wherever shooting and taking prisoners, where the account goes to companies and divisions, the fate of individual people is of little interest to anyone. Far more difficult is the abyss in the deep rear, in the sight of hundreds of people. However, this was exactly what happened on the summer morning of August 16, 1942, with the crew of an American airship.

Airships capable of hanging in place and lowering into the water tracking devices, during the war were used to combat enemy submarines. Moffett Field, the largest base of lighter-than-air vehicles in California, had an airfield on Treasure Island Island in the San Francisco Bay. From there, the airships rose, patrolling the coast in search of Japanese submarines.

One of them was the L-8 built in 1941, which is part of the 32nd Navy squadron. In case of a meeting with the enemy, he was supplied with a machine gun and two 160-kilogram deep-seated bombs.

On August 16, 1942, the crew of the L-8 received the usual mission: to fly over the ocean and, having described the giant eight, to return to the base. The first pilot was Lieutenant Ernest Cody, co-pilot – warrant officer Charles Adams. Bortmehanik Riley Hill remained on the ground: he was told that the car was already overloaded.

The airship took off at six o’clock in the morning. At 7:50 the pilots ruled that they wanted to check the suspicious fuel stain near Farralon Island. Their last words were “Stay in touch”.

L-8 circled over the spot for an hour. Seamen from the fishing boat “Daisy Gray” and the cargo ship “Albert Gallatin” saw that the pilots were throwing light bombs.

Trying to look at something, they kept coming down very low over the water. At nine o’clock in the morning the airship got up and, without contacting it, flew back to San Francisco instead of continuing to patrol.

An incomprehensible silence of the crew alerted the air traffic controllers of the Moffett Field base. They warned pilots in the air: if someone sees a dirigible of the Navy, you must immediately report it to the ground.

At 10:49 am, a Pan Am passenger plane flying up to San Francisco noticed an airship. He flew towards the Golden Gate Bridge. Soon two more planes confirmed that they see an airship, and everything seems to be in order on board. At 11:00 am the device sharply soared up at an acute angle and disappeared into the clouds.

20 minutes later the airship was noticed over the coastal highway. The sailor who was fired took a picture that went past all the newspapers: the motors do not work, the gondola is empty, the helium-filled shell is partially blown out. L-8 quickly declined, losing gas. Two swimmers tried to stop him on the beach, grabbing for the cables hanging down, but the airship was too heavy.

L-8, driven by the wind, hit the ground on the golf course. One of the bombs fell from the fastenings, but it did not explode: the deep-well bomb becomes on the battle platoon only in the water. Freed from the heavy cargo, the airship again climbed into the air and collapsed on Daly City Street, a suburb of San Francisco. The shell was tangled in the wires, the gondola rose almost vertically, damaging the house and two cars.

Local residents and policemen watching the descending airship did not wait for the military. They opened the gondola door, but there was no one there. The firemen came up with the idea of ​​looking inside the blown shell. It was cut with axes, releasing gas, but no one was found.

The military, upon arriving at the crash site, found that there was still a lot of fuel left in the tanks. The lead case with ciphers, which should have been destroyed at any risk, was in place.

Three parachutes, a life raft, a machine gun, personal pilots gun, walkie-talkie, loudspeaker – everything was in place and worked as it should. One gondola door was closed and locked, the second one is closed, but not locked. People who came to the rescue did not have to break it.

The investigation has reached a dead end

The commission of inquiry was headed by Captain Third Rank Francis Connell. The sailors checked the engines: they were in order, except for the propellers bent against blows to the ground. Buttons on the control panel were in the “on” position, although during the drift above the ground the motors did not work.

If the engines are out of order, when the crew was on board, the pilots should first of all ask for help on the radio. She was in good repair, but Cody and Adams did not use it. Finally, the crew could turn to any vessel through a powerful loudspeaker. The pilots could jump out with parachutes, but they stayed in the gondola. There were not only life jackets, but military pilots just in case they wore themselves.

The commission agreed that the crew could not accidentally fall out of the open door. Hardly they could, falling, close the door behind them. Just in case the military thoroughly searched the strip of land, over which the airship drifted, and the entire water area of ​​the bay. The bodies were to remain afloat – the pilots wearing vests inflated automatically when they came in contact with water. 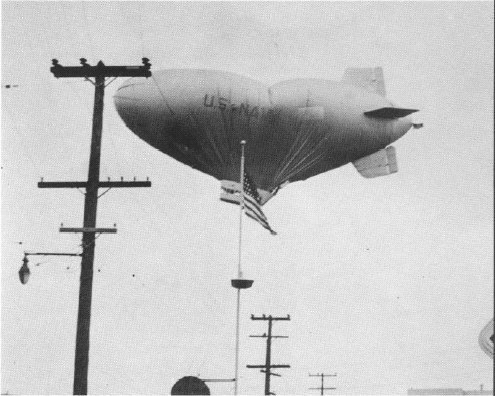 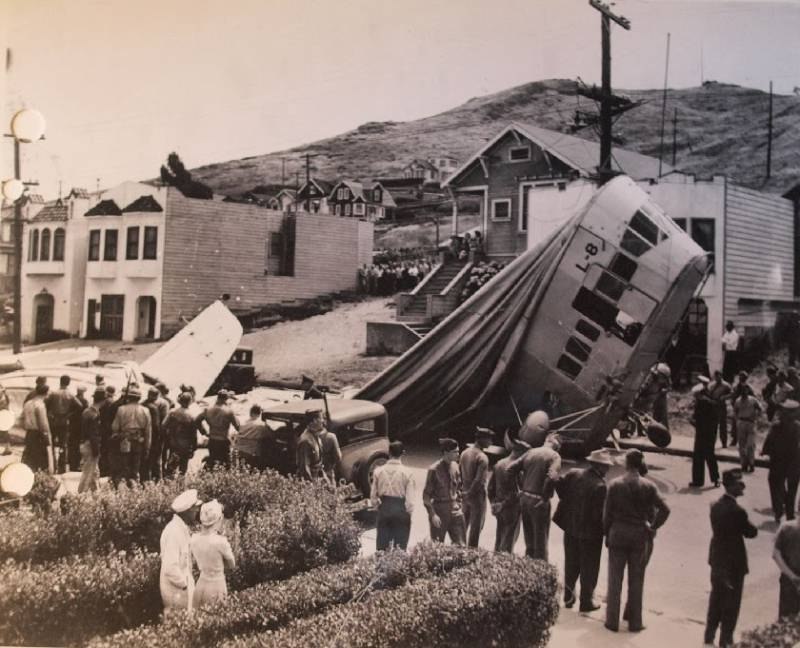 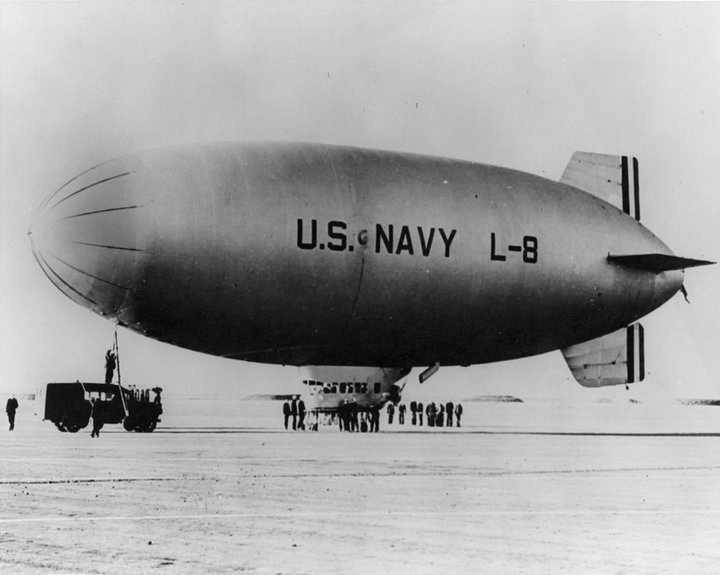 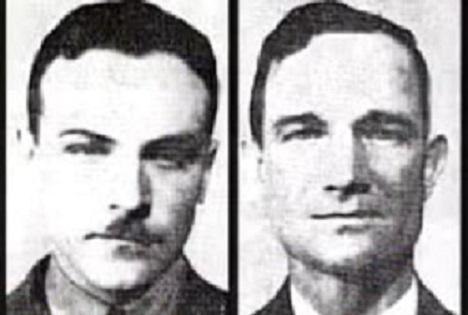 And what if they quarreled, one pilot killed the second, threw the corpse out of the cab and fled? Could not they have been shot by a sniper from a Japanese submarine? These versions were reviewed and rejected.

Both pilots had irreproachable track records, great flying experience and were married. 38-year-old midshipman Adams served on “flying aircraft carriers” – giant airships “Ekron” and “Macon”, equipped with suspension for aircraft. In 1937 he received a medal from Hermann Goering for courage in saving people from a burning German airship. 27-year-old Cody, a graduate of the Navy Academy, also managed to become famous: in 1942, during the first raid on Tokyo, the L-8 in time delivered a heavy load to the aircraft carrier Hornet.

“My son-in-law was a calm, balanced man,” said Juanita Haddock, mother-in-law of Ernest Cody. – I think that he would have thought first in any critical situation, and then he began to act.

Was there a third?

The telephonist Ida Rubi, who was riding on a horse by the beach, saw an airship drifting from the ocean. She told the military that there were three people on board!

“I noticed the airship over the water,” Miss Ruby said. “He was very low.” I could clearly see the letters NAVY (Navy). Then the letters N and A disappeared when the airship was bent in the middle. The wind carried him to the shore. I looked through the binoculars and firmly believed that I saw three people in the gondola. The device flew over me, its propellers clinging to a small cliff. Then we heard the sirens in Daly.

Another eyewitness, 17-year-old Edward Taylor, also said that he watched the fall of the airship through binoculars and saw three people moving in the cab.

Perhaps there was a “free rider” on board who killed the pilots and threw overboard the bodies? Experts have found that this is impossible. In the gondola there is no place where a man could hide. On the pictures taken during the drift of the airship, the cabin looks empty.

A decrease in L-8 was seen by hundreds of people, including policemen, and they all said that there was no one on board. Captain Francis Connell realized that Ida Ruby and Edward Taylor were sincerely mistaken, taking what they wanted for real.

Melt in my eyes

Investigators came to the conclusion that the sudden rise of the airship at 11:00 could be caused only by the loss of part of the cargo, and the weight loss was not compensated by the release of excess helium from the shell. Since the bombs and ballast remained in place, the “load” could only be the body of the pilots. However, the sailors and pilots who saw this maneuver said that they could not miss the fall of two people in bright life jackets.

Freed from the weight of the pilots, the airship had to rise to a critical altitude. There, an emergency valve is automatically turned on and starts to release helium. The fact that the L-8 appeared partially blown over the shore was explained by this: the shell remained intact.

What force forced the pilots to break the order and turn towards the city? Who could take them from the gondola without opening the doors? Why did the motors stop, despite the included buttons? The Commission of Inquiry was unable to answer these questions.

A year later, Ernest Cody and Charles Adams were officially declared dead. Unable to receive serious damage, the L-8 again ascended into the air, continuing to serve as a training apparatus. After the war, the airship was returned to the company that built it.