The mystery of the “living” stones 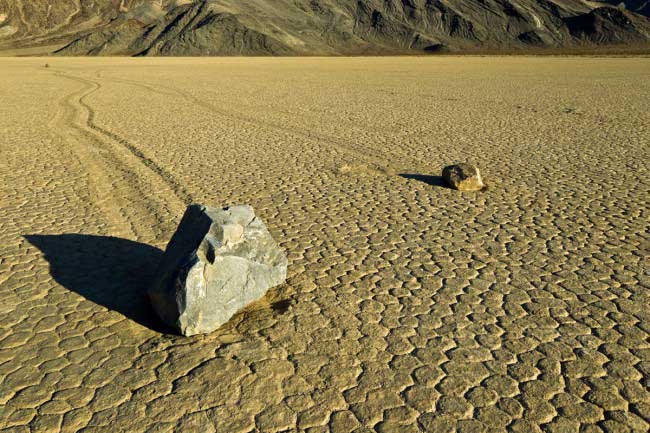 California Death valley for a hundred years, attracts lovers of mysteries — no one until the end and was not able to unravel the mystery of her self-moving stones. In his book “Secrets of the world: unexplained wonders and mysterious phenomena” Herbert Genzmer and Ulrich Hellenbrand write: “boulders mysteriously move across flat, dry ground, leaving a long furrow. There is nothing around that could push stones. Nobody managed to see as they move”.

Not all the stones in Death valley are mobile. And those that are moving, do it every two or three years, and without any time alignment or direction. Judging by the footprints, some blocks make sharp turns (90°). Sami furrows behind the rocks stretch for tens of meters. Most of the moving stones have from 15 to 45 centimeters in diameter.

To explain the mysterious phenomenon, scientists have proposed several theories. One of them is a hitherto unknown magnetic effect. However, this assumption pretty quickly had to be abandoned because the rocks were not discovered substances with magnetic properties, e.g. iron.

The most plausible, from the point of view of scientists, the explanation is based on the combined effect of wind, temperature and water contained in the soil. Despite the fact that the Racetrack Playa (the valley area where is observed the phenomenon) is a dry lake bed, the water there is not so little. It accumulates on the surface during rains or by the melting snow on the peaks of the nearby mountains.

Brian Dunning Brian Dunning, a researcher from California, I am sure that the water gathered on the surface of the soil may freeze during cold snaps, forming a thin icy crust. Dunning believes that the wind is quite able to move the stones for this “rink” for appreciable distances.

Specialist NASA Ralph Lorenz (Ralph Lorenz) conducted a simple experiment to test the theory of Dunning. The scientist placed a small stone into the pot and poured a little water there too — so that its level did not exceed two or three inches. Laurence then put the pan in the freezer and waited until the water freezes. Then the researcher took out the stone with the ice from the pan and set it in a tray with sand. To achieve the movement of stone on the surface was easy — it was enough just to blow on it. Interestingly, in the sand remained, the furrow, similar to those which stretch behind the rocks in Death valley.

Although this explanation seems logical, yet no one can verify its truth, because it needs to experience firsthand the moving rocks in Death valley, or at least have videos of this process.

Indeed, the organization of monitoring in the Racetrack Playa is not easy: not everyone is ready to carry the post for years at a temperature of 37°C in the hope to see how crawling on the sand stone. In addition, the area extends for 4.8 kilometers in length and 1.6 in width, and no advance could not say at what point it will happen a long-awaited event. Imagine the face of a man who spent two years at a fixed boulder and then found out that some stones in another part of the Racetrack Playa has moved on two hundred meters.

Fortunately, nowadays there are technologies to make surveillance less victims. In 2013 a group of scientists managed to capture the movement of the stones on the video through the use of GPS. The results of the study were published in the journal PLOS One.

However, this work could not fully reveal the secret of “living” stones, because the videos were only relatively small stones. But as the sand moving real boulders, while no one was looking.