The mystery of the “Witch circles” in Namibia 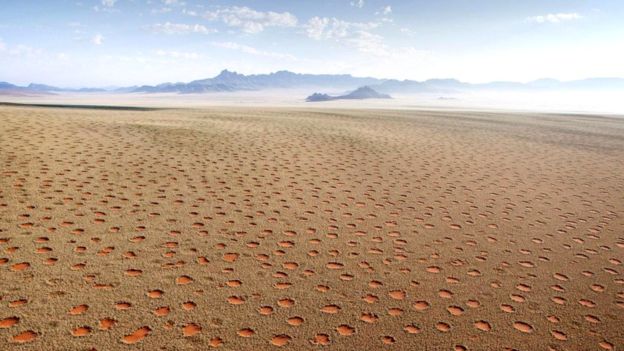 In the grass grown on arid soil of the Namib desert, one can observe a strange phenomenon – millions of round holes with diameter from 2 to 15 metres, devoid of any vegetation and are arranged like combs on the territory with a length of 2,500 kilometers.

These plots of bare earth, known as fairy circles, studded with the whole desert like a huge grass carpet, moth giant moth.

According to the user of the website Quora Prema Rathaur, they seem even more mysterious, considering that no one still really knows how to explain these formations. However, in theories there is no shortage.

Scientists assumed that the soil in these places is contaminated, or that allocated some plant toxins are striking the vegetation around.

Some people think that circles is the work of sand termites, which break through the ground hole for storing water and devour the roots of the plants to the underlying sand could absorb rainwater.

Another hypothesis ascribes the emergence of community competition for resources. In the harsh climate of the desert plants compete for water and nutrients. As soon as weaker plants are killed, but stronger grow, green cover organizes, taking an unusual shape.

However, looking at the unearthly beauty of these phenomena, it is not so difficult to agree with the theory of the local tribes, who are convinced that the witch’s circles – not that other, as the footprints of the gods.