The mystical history of Yakutia 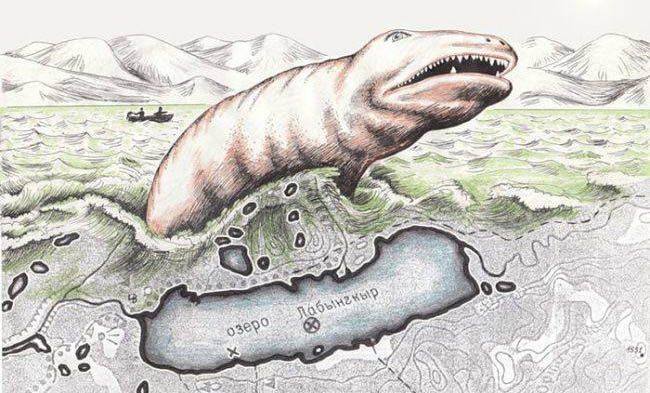 The Republic of Yakutia has long been famous for different kinds of abnormal phenomena. Many of the stories are not fiction, at least, to refute them fails. In this collection assembled the most popular Ghost stories, with varying probability of being accurate.

1. The monster of lake labynkyr

A legend about a creature living in the cold waters of lake Labynkyr has long ceased to be parochial. Interest in this phenomenon demonstrated outside the Republic.

Several times attempts were made serious the search of traces of the existence of “hell”. However, despite a number of eccentricities, irrefutable evidence still has not been found.

It all started with the ancient legends. According to local residents, Labynkyr from time immemorial lived a monster of gigantic proportions. The creature had an aggressive temper, and sometimes attack people and animals.

For the first time scientists became interested in the anomaly after reports of the geologist Vasily tverdokhlebova in 1953, He then said that in the lake noticed a strange living object of large dimensions.

About ten years ago, “the explorers” programme organized an expedition, which recorded a surprisingly deep trench on the lake bottom. Inside I found many skulls and bones of animals. Unfortunately, nothing more substantial expedition failed to find.

2. Death valley in the upper reaches of the river

A lot of legends, mainly on entertainment sites, walks and about a certain valley, Eluu Carcache in the Mirny district of the Republic. According to the texts written by eyewitnesses in different years, the upper reaches of the river do have anomalous area.

During the XIX-XX centuries it was repeatedly found metal boilers, dug into the ground. According to local legend, these boilers have a strange properties.

Some of them are large, so much so that within them there are whole communication with the corridors and rooms. Inside the boiler heat in the winter, but if you spend a few nights here, it is possible to obtain abnormal exposure and die for unknown reasons.

According to eyewitnesses, boilers gradually disappear into the earth, sinking under its own weight into the permafrost. Last more or less reliable testimony of the boilers dates back to 1989.

Attempts to find them were made, but none of the expedition had failed to detect anything resembling the boilers.

Founded by pioneers in the middle reaches of Indigirka river in 1639 the city of Zashiversk by the early nineteenth century, lost all its inhabitants and became a Ghost town. According to the most widespread theory, the town was the victim of mindless extermination of fur-bearing animals in the County.

Existing due to the exchange of furs, Zashiversk soon fell into disrepair. By 1820, according to the sources, lived in the city on the strength of 15 people.

One of the main causes of the decline of Zashiversk could be a smallpox epidemic that swept the late eighteenth century large areas of Siberia. According to a Yakut legend, despite the warnings of a local shaman, salivary opened from nowhere a chest, inside which appeared to be infected things.

In vain they tried to get rid of their belongings, the disease has not spared almost no one. From more than five hundred of the population by the end of the epidemic there are only 40 people. They are unable to continue to develop the city and left it.

In addition, there is a legend that when in the years of Soviet power, attempts were made archaeological excavations at the location of the city, killing two of the scientists who contracted smallpox spores from the remains sacheverel.

Popular urban legend has it that in the early 1990s, some girl decided to go from Pokrovsk to Yakutsk and hitched a ride. Instead of trying to deliver the passenger to the capital of the Republic, the driver raped her, beaten and thrown naked into the street in the cold of winter.

The girl was able to find the strength to get to the police post, however sleeping inside the building, the staff did not Wake up and let her in. As a result, she froze to death.

The accuracy of the story is rather difficult to establish — as you know, in the nineties happened and such things. However, the peculiarity of this case were numerous reports of the Ghost of the girl voting at night at approximately the same segment of the track.

In addition, with the Ghost of a bind and closure of a post of GAI — like, nightly knocking on the door post so intimidated by cops that they decided to move.

5. The headless Ghost on the old road

Less well known is another Ghost. According to eyewitnesses, in 1950-e years it has appeared on old country road near the village Suola in Megino-Kangalassky district.

The spirit had the image of a man, tall, devoid of the head. Dressed in old rags, headless was not a bodiless Ghost and it is really threatened the villagers who dared to go down this road.

Several times he was seen running behind cars. One rider barely dodged his hands on the narrow path. Women collecting cranberries, collided with him so close, but for unknown reasons it did not hurt them — one of them fainted from the unbearable cadaveric stench exuded by the walking dead.

The emergence of creepy ghosts ended as suddenly as it had begun. Despite the seeming absurdity of the story, the author is inclined to trust it, because personally talked to one of those who saw a headless Ghost.

The irrefutable fact that more than 10,000 people witnessed 30f in diameter spheres glowing like white hot metal during the Tunguska event, has been buried and buried and buried. Not to mention that all eyewitness reports do not contradict, but instead correlate in order to show us in which direction they headed. The mainstream science, which should be called propaganda science, or the authoritative dictation of reality to the populace, has come to the habit of trying to “come to the rational conclusion” even when it is irrational to do so.