The number of UFO sightings has increased 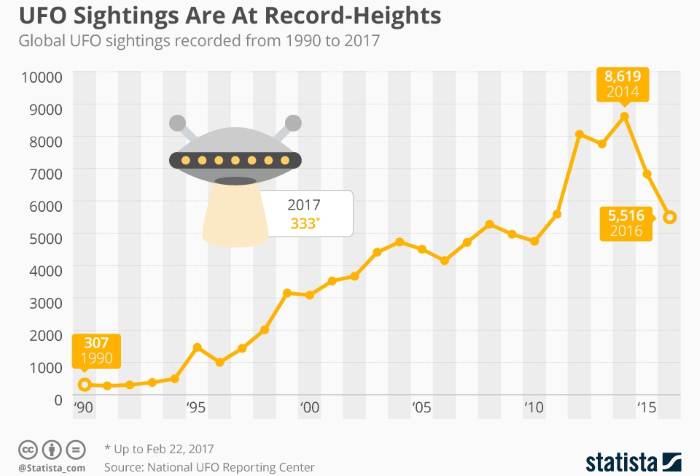 Recently, people are increasingly reporting that they saw UFOs of different colors, shapes and sizes. Over the years, the number of such certificates has increased dramatically, as evidenced by the data of the MUFON organization. So, in 2017, 83,715 UFO sightings have already been registered, which is 12% more than in the past.

For the convenience of users, MUFON researchers have created an interactive system on their site that allows you to post your UFO reports after a quick registration, as well as view the testimonies of others. According to ufologists, only about 30 UFOs were recorded near New York this month, and the total number of calls increased by 28% compared to the same month last year.

Other major cities also showed an increase in the number of UFO sightings that may indicate that aliens are actively interested in what is happening there. Ufologists explained such growth of observations by the fact that now the government is actively testing secret military aircraft, as well as a number of natural causes, including meteors, ball lightning and others.

They also have repeatedly stated that the Internet plays a key role in increasing UFO sighting reports over the past couple of years. According to statistics, most of the evidence is concentrated in coastal areas around the world, with the bulk concentrated around water bodies. In particular, in the Great Lakes region of North America, there are also a large number of reports on UFO sightings.