The phenomenon of Ghost towns 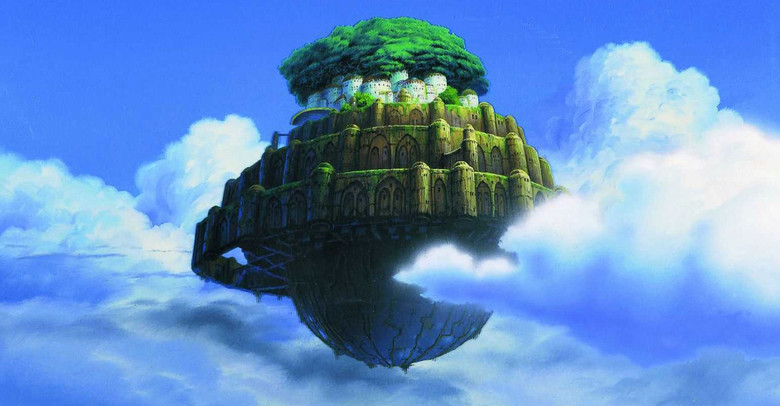 Many have heard about mirages, or even seen. Physics-optics believe that there is nothing unusual, as already disclosed their secrets — all except one. You cannot use the known laws of physics to explain why mirages may reflect events occurring at some distance not only in Space but also in Time.

It remains to add that many Nations have legends about that after certain spells in the sky supposedly will be flying the ancient city”. Perhaps under the influence of these legends is known for his prophecies of the writer Jonathan swift and described in “Gulliver’s Travels” flying city Laputa…

Meeting single “echoes” of the past — not a rare phenomenon. The sounds, the vision of the “afterlife” world is often to bother us with his appearance. Most often it is people, but sometimes appear as if snatched from the other life of the structure.

So, on the old road between the villages of Kerimova and Ryazan, Sergiev Posad district, it was common to hear people’s voices, dogs barking, laughter, the rattle of buckets and other sounds. A noise seemingly ordinary village, but in those places there is no housing. To come closer something the way: sounds like hinder progress, besides getting very scary. The locals believe that the place is enchanted.

There’s even a day and not that evening or night, you can hear someone hit a tree with a stick and, moreover, only a step away before running. Sometimes out of nowhere appeared a man who also suddenly disappeared. The old-timers think that these mysterious phenomena that, according to legend, once in this place, whether killed many Tatars or Gypsies.

Perhaps these came from the past vision and would consider some kind of conventional mirages, if they would sometimes not be able to… to touch it and even chat with them!

In the book “Ghosts and legends of the local region” reported, as in the 1930-ies Mrs. Edna Hedges on the way to his girlfriend got into a violent thunderstorm and had to knock on the door of a lonely thatched cottage. Ego happened in the desert “Roman” road Ermin street (Swindon, England).

In a dark house with low ceilings let her in strange tall and broad-shouldered silent and constantly smiling man. Most of all a woman was struck by the amazing silence that reigned in the house. His camps seemed to cut off even the sounds happening outside the window elements. And a hot burning fire in the fireplace crackled “silently”. After a moment Mrs. Hedges suddenly is once again on the road, she was riding a Bicycle.

A friend the same way at the same time arrived drenched to the skin friends, who said that road house uninhabited for about fifty years. Indeed, shortly after the incident, she Edna, found on this uninhabited site of the collapsed wreck of the abandoned garden.

In the second half of the XX century in Hatora (Devon, England) was famous for similar “pranks” lonely cabin in the woods. Locals, tourists and even topography are very often observed among the trees “a wonderful house, near which dries clothes, and pipe smoke”. The very next day (or even in 5 minutes) on the site of the house startled observers could see only remnants of long ago destroyed the Foundation. However, the locals were convinced that “house” this is only the Ghost of the destroyed in ancient times buildings.

George Russell, a close friend of the famous poet, W. B. Yeats, faced with the same phenomenon in the time when happened to be among the ruins of the old chapel. According to him, the chapel suddenly acquired its original form, and he clearly could see what was happening in her worship…

But the materialization of individual buildings, but mystery does not end there. In the 1960-ies in Haiti, the famous biologist and writer Ivan T. Sanderson, according to his own statement (he told about it in the Novella “something Else”), “went on the streets of a medieval French city.”

When the car stuck in a puddle, he, his wife and the assistant went into the dark high plateau on foot. Suddenly looking up, the writer quite clearly saw the “bright shone the moon shadows that cast a three-storey mansions different architecture, standing on either side of the road.

Their upper floors hanging over dirty and wet cobblestones”. Wife saw this picture (she said this). However, as soon as the second man lit street lighter, all disappeared without a trace. After discussing the incident, the writer and his wife suggested that they somehow got to the old Paris!

“Lucky” and Laura Jean Daniels from Michigan (USA). In 1973, the may warm night, she came home at the usual deserted street. The girl only glanced for a second at the moon, dropped her eyes and did not recognize the city. Instead of pavement and sidewalk having a cobblestone street and a house with a thatched roof.

“Smelled of roses and mignonette… front garden… sat a man and a woman… their clothes were very old-fashioned. Over the gate ran out and began barking at Laura’s little dog, the man tried to reassure her, but the hound was not appeased. Unwitting Time traveler grabbed the wooden gate arm and the old house is gone. But a few moments, the girl was left with the feeling that hand still grips the rough Board.

Sometimes people are able to “see” in the sky the whole city. In 1684 and 1908 in County Sligo, (Ireland) appeared unknown to the geographers “island Of Brasil” with a great beautiful city and the lush greenery fortifications… In the same Ireland, but only in County cork, three times, in 1776, 1797 and 1801 years — residents Ugala beheld their city over the walled green city with white Palisades.

In XV1I1 century, the famous Swedish philosopher Emanuel Swedenborg during a walk in Stockholm suddenly saw in front of the “groves, rivers, palaces and a lot of people”.

July 18, 1820, the captain of the ship “Baffin” Scoresby, watching through a telescope the West coast of Greenland, noticed and drew “a huge ancient city.” Of course, later it turned out that the city in this place is not in sight, and drawings hapless discoverer of the city with the majestic obelisks, impressive temples, monuments and ruins of castles has announced a figment of the imagination.

In 1840 and 1857 the inhabitants of sandy island (Orkney archipelago) saw in the sky a “distant land with wonderful white buildings — crystal city fabulous people fin. And in 1881 — 1888 years already over Sweden observed a number of unknown Islands and other images…

In 1887, the famous discoverer of Willoughby ( Willoughby) even managed to photograph in the sky over Alaska unknown city. The pictures came out very clear, so the author declared… a deceiver, because the photos were a little English rejuvenated Bristol, who is thousands of miles away from this place.

After a couple of years, the vision was repeated, and the local Indians said that what is happening is not surprising, because this city often observed here and in earlier periods from 21 June to 10 July, before coming to Alaska’s white settlers.

In 1890, spring over Ashland (Ohio, USA) also there was an unknown town. Opinions of witnesses are sharply divided, some have argued that this is one of the surrounding towns, others thought that watching Jerusalem, and others — generally non-existent settlement.

In June 1897 on the Yukon (Alaska) a large number of people saw the town. Then they had a long argument and finally came to the conclusion that appeared in front of them the city is not similar to reflection, neither Toronto nor Montreal. The General opinion of the audience formulated in the following way: it was a city of the past! And 2 Aug 1908 three hours residents Ballyconneely (Ireland) was observed in the sky house, designed in various architectural styles…

In our time the image of a certain ancient temple or city often observed in the morning hours on the Peninsula formed by the bend of the Volga near Samara. Avid mushroom pickers reported with domes turrets, the location of which is new each time: on the shore of the lake, a sheer cliff on the hillside, and then they just get up from the reservoir. In short, can not sit in one place for a Ghost to those temples, which may not be for many hundreds of years. By the way, historians have found in local Chronicles even hint at the existence of such facilities.

But most of all, probably lucky cosmonaut Sergei Krichevsky, faced with this phenomenon at the end of April 1982 near the town of Kulebaki Gorky (Nizhny Novgorod) region. He flew inside the Ghost town, considering it an anomaly, this optical illusion from the cockpit of the MiG-23п (“interceptor”).

The flight was stormy night and in overcast. The pilot went to intercept air targets — the other aircraft in the clouds.

Behind a solid night. Krichevsky fell (from a height of 8000 meters at a very low altitude, about 1000 meters) and suddenly the peripheral vision to the right and left on the Windows of the cabin noticed a strange glow and flickering of some objects, unusual flight situations.

The pilot looked for a source and cause of unusual glowing rectangles. And then in front, as if from infinity, appeared points of light, gradually growing into rectangles: “for a few rows to the left and right on the flight, as if rushing through the city at 5-th or 10-th floor high (20-30 floors) houses, which Shine all the Windows. Only visible Windows.

And they swim at a speed of very fast driving car (about 150-250 km/h, which is significantly slower than actually moving in the airspace the plane is 800 km/h), vanishing of the lateral field of view. And on the sides, flying towards from infinity, appear, grow and also disappear a new rows of Windows.

The bottom rows that end at the edge of the glass cockpit aircraft, which is framed by a metal frame made of aluminum. The earth is not visible: the bottom of the darkness. But the top — solid Windows like the arch, bordered by rows of Windows across the surface. It’s a tunnel, all internal visible surface of which is as a moving and growing system of Windows.”

Drawing the inner surface of the tunnel reminded Krichevsky famous arch of the Winter Palace in St. Petersburg. This lasted about five or ten minutes. An illusion of the night city. Even with small bends, nothing has changed, “tunnel” all earlier remain strictly on course. And only when the pilot slightly increased speed, in just a few seconds it disappeared. The Ghost town is gone, around the black sky.

Krichevsky again reduced speed and again came to the same tunnel, with an arch overhead. Pilot astronaut even a little experiment with height and speed and concluded that the Ghost city exists only in a certain layer at a certain speed and altitude. Unfortunately, Krichevsky failed to photograph this amazing phenomenon.