The riddle of the “ant cycle” 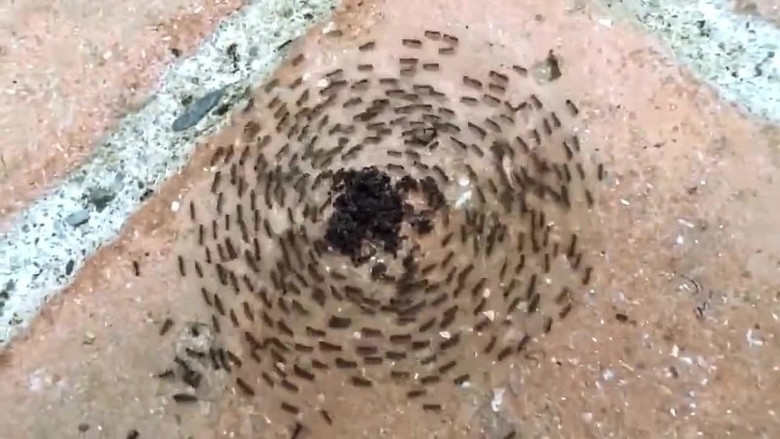 It all starts with the fact that a group of ants runs around in circles. Gradually, more and more insects are involved in this cycle, the number of which can reach many thousands. The ants continue their movement until exhaustion, until they perish.

Ants (ant, death spiral, death mill) is a natural phenomenon, consisting in the fact that one or a small group of ants, at first glance, completely without cause, starts running around in a vicious circle, gradually involving in its infinite cycle everything More and more other ants.

The ants continue their run until they fall dead, and the ant circle continues its rotation until exhaustion, leaving behind a horde of dead.

The largest American miremicologist, William Morton Wheeler, in 1910 described the case of a spontaneously arisen ant circle that he had observed in the laboratory in the course of 46 hours. In 1921, the American traveler William Beebe, in his book The Edge of the Jungle, described the circle of ants-ants that he had seen in Guyana, about 365 meters in circumference, in which each of the ants performed a full cycle in 2.5 hours.

This ants existed for 2 days, spreading the soil under dead bodies, while a small group of working ants, again, for no apparent reason, separated from the general movement and took the survivors behind them.

The first detailed study of ant circles was conducted by the American zoopsychologist Theodore Shnairla in 1944. He also noted that a similar phenomenon was described as far back as 1896 by Fabre, who observed a similar circular motion in the tracks of a traveling silkworm.

The supposed explanation of the phenomenon is based on the orientation of the ants on the pheromone trace – the scent marks that are left along the path of movement and which are labeled by all the routes of foraging ants, engaged in the search for food. The more ants passed along this path, the more it smells and is all the more attractive to others.

Therefore, if the path of several ants accidentally closes in a ring, they will quickly make this “loop” smelling strongly, and it will attract more and more new insects. And break away from here will be impossible, because the pheromone trace will be most powerful in the “loop”.

Ant circles are very rare in nature, mainly in South and Central America. And they are arranged by nomadic ants. Why they are observed ant-circles – is unknown. Probably the answer lies in the peculiarities of the movement of these insects. The fact is that nomadic ants, unlike many others, often move in dense columns.

If the movement of such a column accidentally closes into a circle, it almost instantly forms a strong-smelling ring pheromone trace. If the ants more often move alone or in small groups, as is typical of most species, the probability of formation of an ant circle is less.

After all, when only one or several ants accidentally close their trajectory in a ring, its scent attractiveness will not differ from the set of alternative ways.