The Secret of “Winged UFO from Eferia” 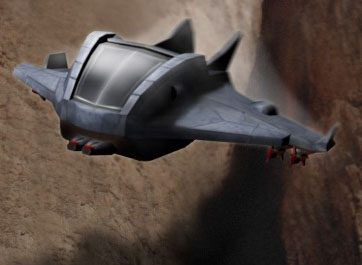 In the late 1940s, Americans did not even hear about the appearance of UFOs, but a unique event, where intertwined astronomy, aliens and spiritism, forever remained in the memory of the inhabitants of San Diego. The winged ship from Ephyria became the first messenger of the other world.

It all started in the evening, when the townspeople on October 9 looked at the sky in the streets to see the star rain promised by scientists, as our planet crossed the Draconids stream and its meteors. The forecasts were fully justified, so that while 10,000 objects burned in the atmosphere, the Californians contemplated 180 celestial bodies per minute.

But only with them, in the presence of astonished people, a strange air transport appeared suddenly, resembling a winged shell and surrounded with whitish glow from all sides. Then the local doctor William Nabers told the media that this ship was heading toward the Moon, after which such information was confirmed by other witnesses of the event. Also unusual wings were noticed, like a butterfly, after which some people even compared the object to a huge bat.

The dark body of the extraterrestrial apparatus was darker than the rest of it, and he was slowly moving between the buildings, allowing people to view themselves in all their glory. The amateur astronomy Bob Stephenson from the neighboring city of El-Kahona could admire such a spectacle with the help of a telescope, but the most important hero of this real story was the medium Mark Probert.

The boy lost his mother at the age of 12, and then, having difficulty graduating from the six grades of a private school, he fled the house to sail on the ship as a cabin boy. After hard labor in the Navy, the 18-year-old youth tried various professions in life, and even performed in vaudeville, but then the penchant for drawing allowed him to become a member of the company that produces visual school aids. There, for the first time after his acquaintance with the girl, he saw behind her a ghostly male figure smiling at her and laying her hands on the shoulders of a handsome person.

He did not dare to tell her about this vision for a long time, but after the conversation he found out that it was the spirit of her recently deceased father. Also in the room during work, the guy noticed a huge dark cloud that emitted sounds that swept over the bed where the former homeowner was dying. Young people played a wedding in 1942, but then Irene often said that the man in a dream speaks different languages ​​and even recorded such a story on tape. Mark himself did not understand anything from the text, and the linguists found out that the person was talking with invisible interlocutors in 8 languages.

After such an event, he became interested in the scientist Mead Lane, who was also fond of spiritualism. He immediately assumed that the artist has the abilities of a trance medium, since the deceased can control his consciousness during dreams. After this discovery, the mentor taught the disciple to properly relax and perform astral exits from the body, and then in 1945, for the first time, he was introduced to an entity that called himself an American Martin Linford, who lived in the 19th century and died at a young age.

He decided to get in touch because of the knowledge of the medium of the English language, after which he reported that he was a member of a group of priests and philosophers who wanted to tell about their research to humanity. When a man came out of a trance, he saw the shocked eyes of his wife and professor, talking about a beautiful experience. Then he managed to repeatedly perform such actions during the day, not paying attention to the audience, and the spirits also decided to adjust to the rhythm of a living person to be able to communicate. The medium never took money for his sessions, which became a sensation of the city, because he earned his trade professionally. Specialists found out that his interlocutors except Lao Dza were Alfred Lunts, along with Ramon Natali, who worked under the leadership of Galileo Galilei. But the head of society was the priest of a civilization that died before the appearance of mankind 500,000 years ago under the walls of a collapsed church.

But it is worth paying attention to the mysterious UFO, which appeared in front of people for the first time, as an unknown stranger told the medium during the session. It turned out that Karita flew from a distant planet, located at a great distance from the Earth. The inhabitants specially sent the ship here to show their existence to people, and also it moved with the help of levitation and consisted of 10,000 parts, in the movement of which electricity is involved. Then the creature was replaced by the Indian guru Ramakalo, who reported that he can not name the name of the heavenly body, whose inhabitants have been trying to come into contact with earthmen for many centuries, but now thanks to the strong rays of light radiated by the planet, such flights became possible.

They were much higher in level of development and wanted to land, but were afraid of an inhospitable meeting, so they asked scientists to talk with representatives in a secluded place.

This information was reliable and passed on to journalists, after which a new medium session with the participation of an extraterrestrial interlocutor struck the society by the fact that the UFO flew from another parallel world instead of the solar system. Then he was called Ethereal, and when similar objects began to appear in the sky of the country, the professor turned out to be the only person who named the guests’ goals, but ufologists did not even believe him.

Only after many years they realized that extraterrestrial ships could suddenly disappear during a change in the frequency of vibration between worlds. He himself died in the early 60’s, not waiting for communication with the aliens, and then his disciple did not become. Now the researchers continue to use his theory, not even suspecting that it appeared thanks to the tips of deceased geniuses.