The UFO crash on Spitsbergen in 1952 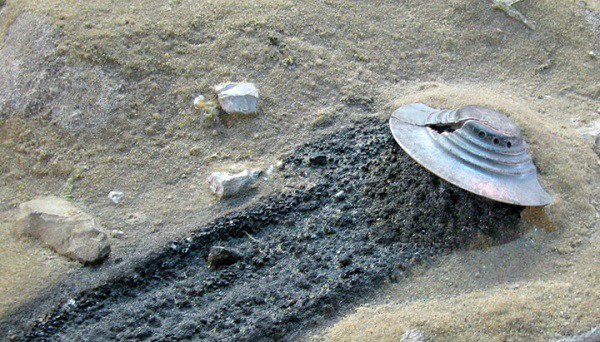 In the summer of 1952, rumors spread throughout Europe that the Norwegians found some strange disc-shaped apparatus on the island of Spitsbergen. The first response to a strange incident was the newspaper Saarbrucker Zeitung of June 28, 1952. It said that the air patrol of the Norwegian Air Force was interested in a source of strange radio interference. The pilots caught the bearing and informed the authorities about this.

The research team that landed on Svalbard, following the radio expert, was moving toward the target marked by his equipment. Finally, they came upon a bluish-white metal disc about 40 meters in diameter, smashed to pieces, but not enough to not recognize its original form.

The metal was squeezed or drawn strange signs, “similar to the Russian letters.” Along the edge of the disk were dyuzopodobnye holes. Of course, Saarbrucker Zeitung suggested that the facility is a Russian aircraft of a new type, and mysterious radio interference is the operation of an emergency radio beacon, a “black box”.

It was not clear why the Russians were not the first to get to their plane: the Soviet company Arktikugol, based in the purely Russian mining towns of Barentsburg and Pyramid, worked on Spitsbergen. When the Soviet military aircraft crashed there in the seventies, ours did not hesitate to land an entire landing in Norwegian territory and to enclose the site of the catastrophe long before the Norwegians appeared there.

Nevertheless, today it can sometimes be found that “… the crash did take place, but it was not a flying saucer. In reality, it was rather a Soviet experimental disk-plan, developed by German scientists captured at the end of World War II … “.

The newspaper “Volksblat Berlin” on July 9, 1952 specified that the disk was 48.86 meters in diameter and consisted of some unknown metal. And the Russian-like symbols found on instruments inside the disc had nothing to do with the Russian language. Other newspapers wrote that the Norwegians could not understand the design of the disc and they had to invite British and American specialists.

The first thing that these specialists did was advise the Norwegians to keep the incident as close as possible. Only three years later, an official message broke out of the bowels of the Norwegian General Staff, so shocking that it even eclipsed even the rarest rumors. Note in the “Stuttgart tagesblatt” of September 5, 1955.

“Oslo, Norway. 4 September. Only now the research department of the Norwegian General Staff is preparing the publication of a report on the study of the remains of the Nenets Autonomous Region, which suffered a catastrophe in Svalbard, presumably in early 1952 “.

The chief of the department, Colonel G. Dornbil, during the briefing of the Air Force officers, said:

“The accident of the Spitsbergen disk was of great importance. Although the current level of scientific knowledge does not allow us to solve all the riddles, I am sure that these fragments from Svalbard will be of great importance in this respect. Some time ago some misunderstanding caused the talk about the fact that this disk was probably of Soviet origin. But he – we state this categorically – was not built in any country on Earth. The materials used in its design are completely unknown to all the experts who took part in the investigation. ”

According to Col. Dornbil, the research department does not intend to publish a detailed report until some sensational facts are discussed with American and British experts.

In contrast to information coming from American and other sources, Lieutenants Brov and Tullensen, appointed as special investigators in the Arctic regions after the events on Svalbard, reported that flying disks landed several times in the polar regions.

“I think that the Arctic serves as a kind of base for unknown objects,” Lieutenant Tullensen said, “especially during the snow storms, when we are forced to return to our bases. I saw the landing and take off in three cases. Very bright light, the intensity of which varies depending on the speed at the time of take-off or landing, interferes with surveillance. ”

Since then, attempts to find out some details about the found disk have stumbled upon the cold silence of the Norwegians, realizing that they said a lot of superfluous things. The American UFO organization NICAP sent a request to the Norwegian embassy regarding the spitsbergen events and received a mysterious answer: they say that “the material on UFOs of our Air Force is, in the main, highly secret and can not be placed at your disposal.”

Hence, there is something to hide. Otherwise, the answer would be formulated as something like “we do not know anything about any broken plate and sincerely regret that you believe in such nonsense.”

What is this “sensational facts” associated with the Svalbard disk, which the Norwegians did not dare to disclose? Is there anything more sensational than recognizing that the plate is of extraterrestrial origin?

Perhaps, the intriguing note of the American journalist Dorothy Kilgellen will help us to answer this question. Interested in rumors about the participation of British experts in the study of the Svalbard dish, she directly asked about this “one high-ranking person” from the British government, who did not want to “light up” in the press. Soon in her home magazine appeared the following lines:

“Today I can tell you about the otherworldly, shaking history. British scientists and pilots after studying the remains of one mysterious flying ship are convinced that these strange air objects are not optical illusions or Soviet inventions, but are flying saucers that originate from other planets.

The source of my information is a British official in the rank of a member of the Cabinet, who prefers to remain anonymous.

There were small people in the plate, probably less than 4 feet tall … I found out that the British government refrained from publishing an official report on the inspection of the flying saucer at this time, perhaps because it does not want to frighten the public. ”

So that’s it! And although it is not clear from the note whether the corpses of the Nl-nauts were extracted from the wreckage, or such far-reaching conclusions were made by measuring armchairs or some kind of disk devices, it is clear that it was not made by humans or by humans.