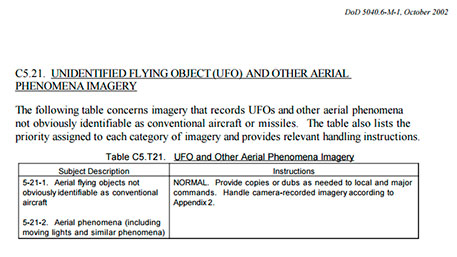 The US Department of Defense published declassified documents, among which was an instruction for shooting UFOs. Thus, in the text of the instruction for the recording and processing of visual information materials dated October 2002, there is a section C5.21, which gives recommendations on how to record unidentified flying objects (UFOs) and other unusual celestial phenomena.

The US military is instructed to shoot UFOs on film, make copies of negatives and immediately send copies of the images to the main command.

Earlier this year, the CIA published its archive of 13 million pages, including documents on alleged UFO sightings and the previously classified military project Stargate, in which Americans conducted research on supernatural human abilities.