There was a second explosion of a mysterious funnel on Yamal, Russia 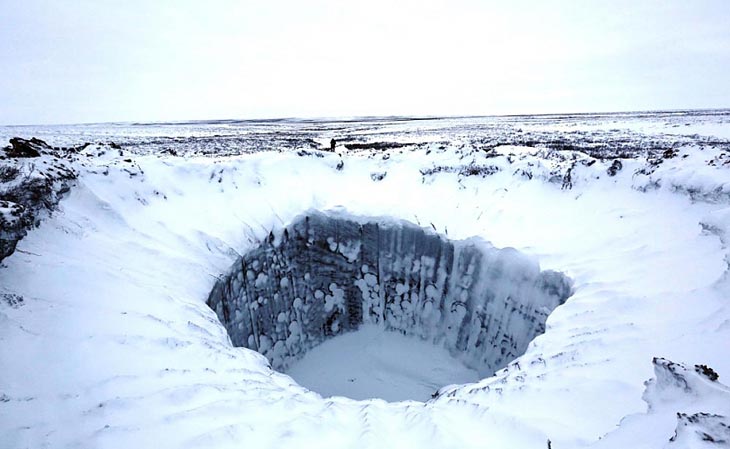 In one of the Yamal “black holes”, studied in many laboratories, Russian specialists discovered a unique phenomenon. It showed signs of a new gas release. What does it mean?

“In December 2017, we discovered from space that a new hillock had exploded in one of the craters flooded with water and exploded,” Vasily Bogoyavlensky, a well-known scientist and deputy director of the Institute of Oil and Gas Problems of the Russian Academy of Sciences, told the Ecology 2018 forum. – That is, the phenomenon of gas hydrodynamics periodically appears on the same place. As we expected, to some extent, the mechanisms of volcanism work, pressure accumulates, and a release occurs. Then the situation stabilizes, part of the discarded rock falls to the bottom, closes the degassing channels. Then the pressure again builds up and at a certain moment there is another release.

And in this unique phenomenon, we managed to prove that the formation of craters – not a one-time phenomenon, not a one-time exhaust gas. There can be periodically, annually, every two or several years, additional emissions occur. And this of course increases the risk of human life in the Arctic.

The exact location of the funnel, scientists have not yet revealed. They promise to lay out a detailed analysis in the near future in the scientific publication “The Arctic: Ecology and Economy”.

Also, the scientist does not hurry to unequivocally assert that all funnels in the Arctic are of purely natural origin.

– One of the most famous craters – in the flood plain of the Morda-Yakha River in Yamal, north of Se-Yakhi, is uniquely a natural phenomenon. We managed to take samples of gas, analyze. The gas is biogenic, there are no bore holes nearby, so there is no doubt that the appearance of this funnel is of a natural nature. But about all the craters that have been discovered in recent years, we can not say with absolute certainty that human activities did not contribute to their emergence. It is possible that some are technogenic in nature, – says Vasily Bogoyavlensky.