Two-legged lizard-like creatures from the Americas 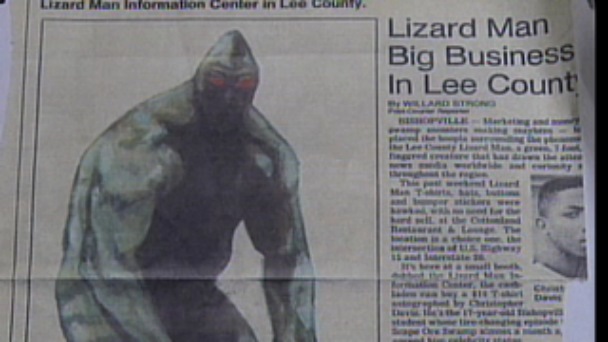 Nowadays, stories about encounters with mysterious “lizard people” most often come from North and South America. In North America, the most famous is the so-called Bishopville lizard man or Lizard Man of Scape Ore Swamp, who has been regularly seen in the neighborhood of Bishopville (South Carolina) since the 1980s.

The first to face them was 16-year-old Christopher (Chris) Davis, when in 1988 he rode along an abandoned highway through a marshy area near Bishopville. The boy stopped to change the tire. Grabbing a jack from the trunk, he heard someone squelching along the water, walking along the road. Davis turned and saw a strange creature resembling a bigfoot, that is, a snowman, but not covered with hair, but with green scales.

In fear, Chris hid in the car, and, as it turned out, not in vain. Approached the monster tried to bite the car, leaving on the back of the car with incomparable tracks. And then climbed on the roof of the Toyota and for a few minutes tramped there, then left in the marshy thickets.

“I saw his neck and lower – three thumbs, long black nails and rough rough green skin. It seems that the monster had an impressive physical strength. I looked in the mirror and saw a running green spot. I saw the fingers on his legs. And then he jumped on the roof of my car. I heard a grunt. Then I saw through the windshield my fingers grabbing the edge of the roof. ”

A few days later, the same traces of claws and teeth were found on another machine left for the night near Skape Ora in the same marshy area. A week later, on the local sheriff’s table, there were dozens of reports of “hooligan antics” of a mysterious creature.

According to eyewitnesses, it was possible to compile his description. It is more than two meters in height, covered with green scales, a small crest on its head, legs and hands with four fingers look like monkeys.

A group of scientists, together with the police, examined the surrounding marshes. Lizard they did not see, but they found traces of his stay – 80-centimeter prints of four-toed feet (or paws) and broken off at the height of two and a half meters of trunks of young trees. 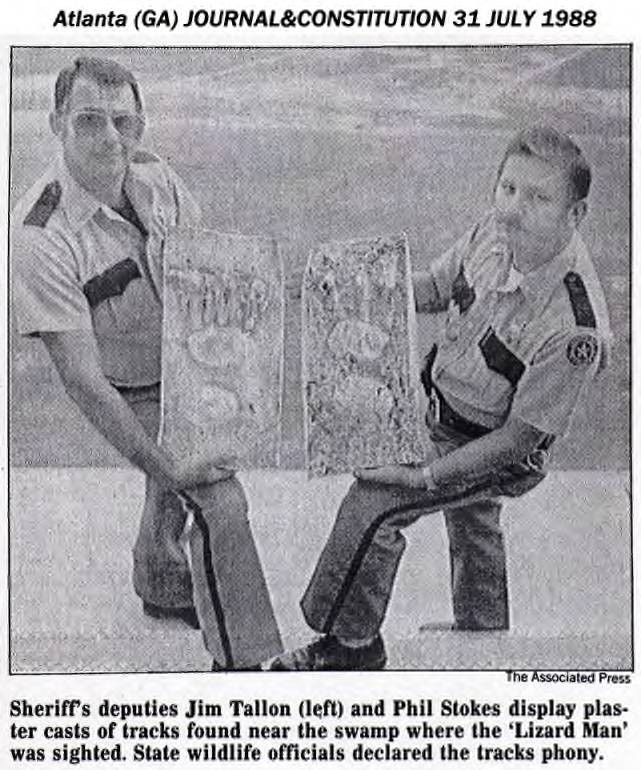 Scientists abstained from any hypothesis regarding the appearance of a mysterious giant. However, it was clear that, since no one had met him before, he could not have been a relic creature such as bigfoot, which has survived to the present day.

In 2015, a hunter from Bishopville allegedly filmed a strange creature in the swamps. But the video is difficult to understand what happened there in the thickets. 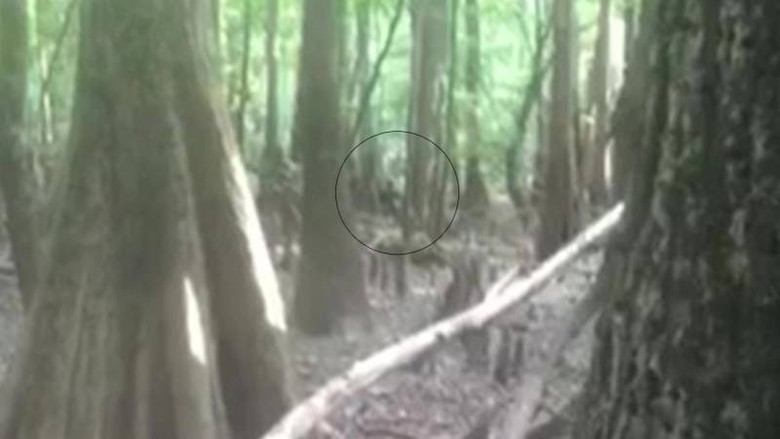 Writer John Keel collected around the United States about 20 cases of humanoid eyes with skin, like reptiles.

The case with Charles Wetzel in California is a bit like the one with Chris Davis, only it happened 30 years earlier. November 8, 1958 Charles Wetzel (Wetzel) was driving in a car past the Santa Ana River near Riverside (California). Suddenly, in front of the car appeared a two-meter humanoid creature with glowing eyes and a beak-like mouth.

The covered creature was similar to the leaves of scales. Wetzel braked, and immediately he yelled at the car with a yell. Wetzel started off and knocked over the creature. From his claws on the windshield were traces.

On August 19, 1972, Robin Fluwellin and Gordon Pike of British Columbia (Canada) pursued a strange 1.5-meter-tall humanoid who emerged from Lake Tethys. The creature was covered with scaly skin, there were 6 thorns on the head.

A similar creature is seen in South America, where no hominids have ever been seen before. And then a real monster suddenly appeared in the heart of Brazil, on the plateau of Mato Grosso. In its northern part there is a dry wooded area where the Maksubi tribe live.

They are peaceful people, they do not engage in hunting, and they cultivate cassava and papaya and raise livestock, mostly cows. Since wild animals are not found there, cattle are on pastures without any protection.

Recently, somebody has started to kill cows here. And their carcasses were torn to pieces, for which a huge force was required. The head remained whole, but the tongue was surely torn out. Apparently, for him who hunted cattle, he was a treat. 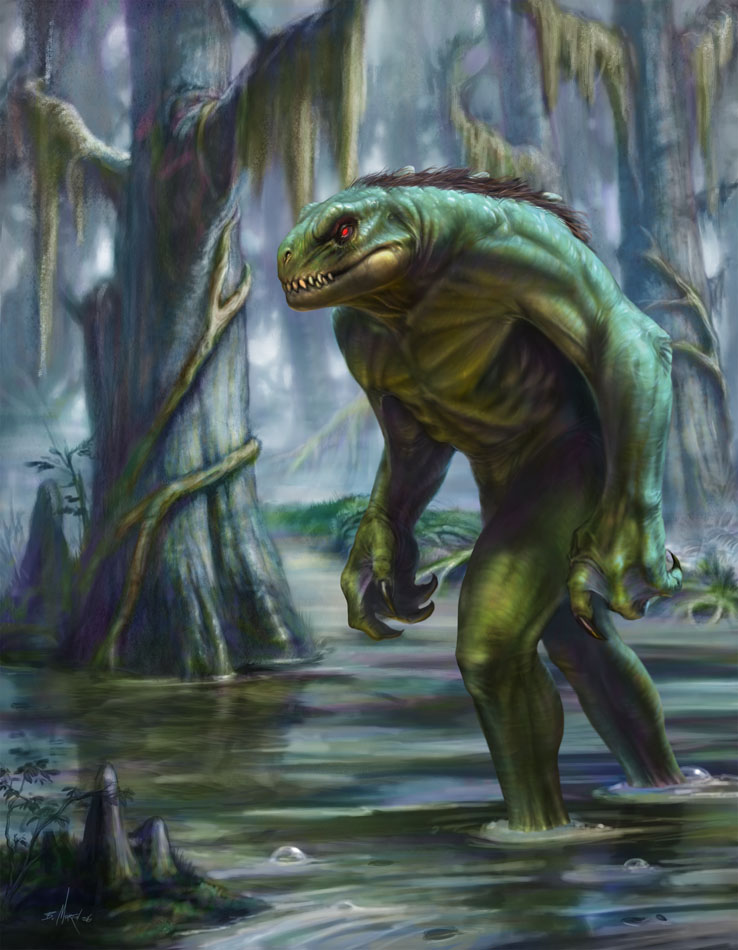 After more than a dozen animals were torn apart, the Indians turned to the police for help. Two guards of order were sent to Maksubi, who patrolled a fairly large territory in a jeep for a week. But no one who could attack the cattle, did not notice. Then the Indians decided to defend it themselves. They formed from young people something like spetsnaz and got permission from the authorities to arm them.

Newly revealed pathfinders were more fortunate. They several times saw some huge humanoid creatures, they say, “terrifying appearance”, very similar to giant bigfoots. But, unlike the hairy snow people, the body of the Brazilian hominids was covered with large scales. Therefore the Maksubi named their tatus – armadillos.

In describing their appearance, there were no disagreements: the arms and legs are thick, like the trunks of young trees; The forehead is small and oblique, and on the head is a protruding crest. Thanks to the incredible power of the tattoo was able to move very quickly through the forest, instantly hiding in the thicket. Therefore, it was impossible to catch him or just shoot him.