Two mysterious luminaries in the sky over Texas 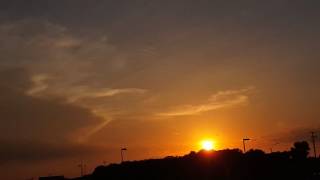 The user of YouTube under the name LsGunZ06 has posted a video on his channel, in which two luminaries are seen in the evening sky. One of them is definitely the setting sun, but the second … Let’s figure it out.

How is it filmed?

The video is taken from the car window, obviously directly on the phone, in Texas. At the same time, the author of the video could not make both “suns” appear in one frame, because they were too far apart. Thus, you can suspect the installation. On the other hand, everything looks very natural. The author of the video assumes that this is the planet Nibiru. But, probably, there are more simple explanations.

Usually such phenomena are easily explained by optical illusion. Some users claim that the video shows the moon, halo, clouds with light cast on them other phenomena. Also, a shiny round object, for example, an element of an advertising design can reflect the rays of the setting sun. Especially, judging by the video, the objects are just opposite each other. However, in the video everything looks so believable that any skepticism involuntarily recedes. What do you think?