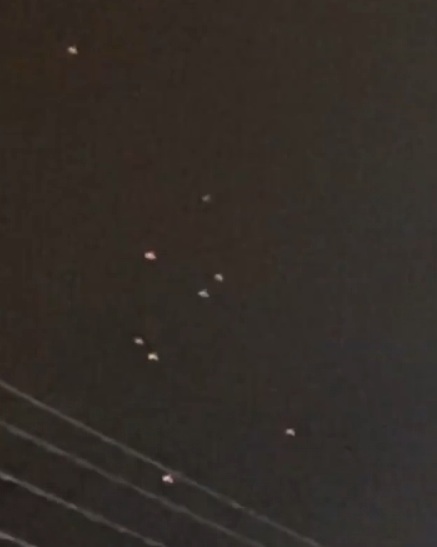 The unusually high UFO activity in the sky of the earth continues. Residents of the American city of Cleveland (Ohio), yesterday April 4, witnessed the appearance in the sky above the city of an entire UFO armada. Moreover, all these objects flew without hiding at a fairly low altitude.

The most interesting thing is that there are several videos of this event, which clearly show that a large group of UFOs slowly flies in an apparently chaotic order, but then it becomes clear that the UFO system is constantly being corrected and there are three “leading” objects in it, followed by all the others .

At some point, it seems that the objects are flying along a straight path, but then the whole group stops and hangs in the sky above the city, after which three objects remain in one place, and the rest of the group changes direction and flies out of sight.

This is amazing! This completely excludes attempts to explain the UFO invasion taking place in recent days by the “satellites of the Elon Mask” – the satellites do not stop and do not change the direction of flight at right angles!

Cleveland is a city in the United States of America, in the state of Ohio. Cleveland is the main city of Cayahog County, Ohio’s second largest city. Located on the south shore of Lake Erie, on the Cayahoga River, on the international maritime border between the United States and Canada, about 100 km west of the border with the state of Pennsylvania.