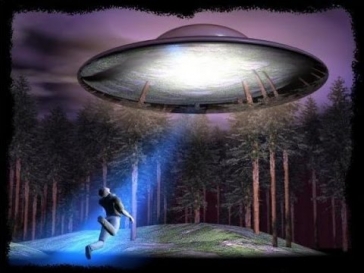 Contact with an unidentified flying object could be disaster. 23 APR 1976, dozens of residents of the Brazilian municipality of Quesada noticed in the night sky mysterious object. This was a huge disc, which silently flew through the sky, emitting a bright light. It also saw participants night maneuvers at the site of a military base Tiro de Guerra. 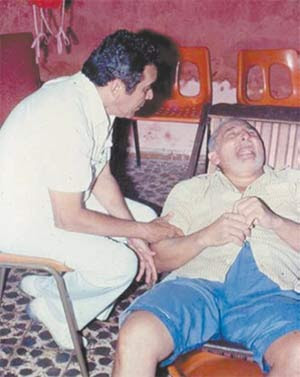 Farm Luis Barroso Fernandes was just a few kilometers from Kichadi. Louis lived in a town twenty kilometers from the farm, but from time to time came to see his possessions and to give tasks to employees.

Instead machines Louis preferred to ride a two-wheeled cart. Who knew the road the mule he took the owner to the farm and home.

The day in question, Louis went back about two o’clock. Suddenly he heard a sound, like a buzzing swarm of bees, coming from above.

The farmer raised his eyes and froze: directly above his head hung a huge disc. Startled, the mule shied to the side. From disk hit bright beam of light, paralyzing the animal and rider. The object landed on the road 30 metres from the wagon.

The glow from the disk, began to wane, and I saw a something resembling a huge wheel from a tractor or tortoise shell aluminum color – said Luis ufologist, Reginaldo Athayde. – It has opened a small door and out came two creatures. They were like ordinary people, but less growth and in strange clothes. In hands they held something similar to lanterns. One of them shone in my face and I lost consciousness.

When Louis woke up, he was still sitting in the wagon, but the landscape around was different. Now the farmer was only three kilometers from Kichadi. Maybe the mule continued to walk on the usual route. Maybe the wagon moved himself UFO.

The unfortunate rider was shaking, he felt dizziness and nausea. Louis eyes were burning, like they poured pepper, his head throbbing from the pain. The left part of the body he blushed, his hands barely moved. Fortunately, on the road there is another belated traveler – the shepherd joão Francisco. He helped Louis to get home. 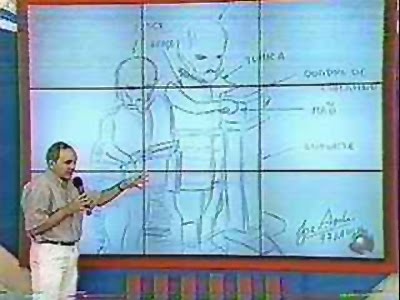 Once home, Luis asked his wife to call the doctor. Antonio Moreira Magalhaes, one of the best doctors couldn’t diagnose. Meanwhile, Louis was getting worse. The body began to swell, eyes bulging like a frog. A mule several days did not touch the food and shied away from any sounds.

Dr. Magalhaes did not believe in the story of Louis about meeting strangers, but soon went to the hospital the 23-year-old student Francis Rosettes da Silva. Along with his 12-year-old brother Antonio da Silva Lado she was walking in the forest in the morning after the events described.

Suddenly from behind the trees hit the beam of light, aimed for the girl right in the face. A few moments later the beam went out, and she felt so weak I, leaning on the shoulder of Antonio barely drag myself to the house and it fell unconscious. The symptoms of the disease Franciszka was the same as Luis, but in a milder form. Soon she fully recovered.

The doctor decided to send Louis to the state capital to pass an additional examination. In the accompanying sheet Antonio Magalhaes wrote: “the Patient experienced a close encounter with a UFO”.

Louis examined 17 doctors, but none could explain the strange symptoms. Two weeks later, Louis returned to Kisado advised in parting, get plenty of rest. 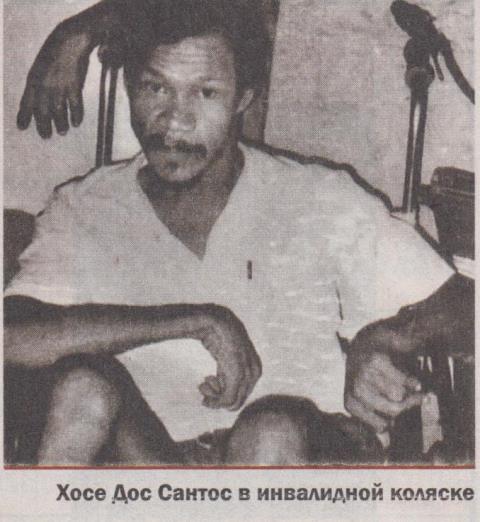 Louis did not recognize relatives and friends, forgotten how to read and write. In his vocabulary there are three words, like a year-old baby: “Mama”, “give” and “scary.” The last word he uttered when triggered the flash of the camera in the hand of a Metropolitan reporter. Dr. Magalhaes had no doubt that his patient had suffered a terrible trauma associated with the light. Soon he stopped moving.

– This is something incredible, ” said Dr Magalhaes. Not only the brain returned to an infant state. There have been changes in the skin. She was thin, smooth and without a single wrinkle, even as a boy. Although Louis lies in bed without moving, his muscles are toned. He has excellent health, except for the failed head. We shot it the EEG, but there is no pathology. He had no paralysis, not MS and not a stroke. If you change the position of his limbs, Louis slowly bring them back. So he is able to move, but not making any moves because of problems in the brain.

Louis lay without movement for 17 years. He died in 1993 – apparently, just old. The farm and shop at keisha de inherited one of the sons Luis and Francisco Leonardo Barroso.

The father, still could talk, kept repeating: “they had to hide in the woods. Under the roots of a tree they wouldn’t find me”, – he said. I believe him because he saw a UFO when riding on a motorcycle on the same road. The object emitted a very bright light. Had to slow down and turn around, so that the light didn’t blind me.

UFO researcher Reginaldo Athayde too late learned of the death of Louis. He insisted on the exhumation of the body, Francisco did not agree to disturb the remains of the father for the sake of curiosity capital researchers.

Another Brazilian has a little bit more luck. Jose DOS Santos has kept his mind, but the meeting with UFO confined him to a wheelchair. 22-year-old Jose lived on the farm near the coastal town Karyoubinga. He was the only son of his widowed mother and took care of all the work on the farm. DOS Santos never went to school – not before it. The young man taught himself to read and write.

Warm may evening Jose went to the Church service. Deciding to take a short cut, the guy crossed a field and was about to climb over a low fence.

– I was nearly on the other side when my neck hit the beam of yellow-green light – said Jose ufologist Jose Alencar. – Ray went from the object hanging ten meters above the ground. In diameter it was about two meters. In the bottom of the UFO was visible through the hole, and on the body the lights are burning, but I didn’t count them all. I fell and tried to crawl into the bushes, but couldn’t move. Five seconds later the object flew away toward the ocean.

DOS Santos has been around the fence for three days. No one was looking: the mother went away for a few days in the capital of the state, and the neighbors thought that the son went along with it. José was lying in the mud, devoured by mosquitoes, but could not ward off the bloodsuckers. Then came the flies, attracted by the smell of the bowel’ and bladder accident too out of control. Lucky for him only one way and Jose was lying in the shade of the bushes, and escaped sunstroke.

I was scared, but felt no pain, ” recalled Junior DOS Santos. Tortured hunger and thirst. I didn’t sleep even at night.

Jose found on the fourth day. DOS Santos thanked his rescuers: he could speak, although with great difficulty. Neighbors took care of the guy to return mother, but the doctor did not cause extra money no one had. The doctor was at the bedside of guy only a few weeks when it became clear that Jose is getting worse.

As in the case of Louis, medicine soon stalled. DOS Santos was confined to a wheelchair.

– I dream only about one thing, ” he said eight years later. – I want the aliens to come back and heal me. Besides them, nobody.

UFO researcher Jacques Vallee in 1988, came to Brazil to study the cases of aggression of UFOs. He met with witnesses, interviewed doctors and police, copied dozens of official documents. The conclusions to which came the famous Explorer, frighten and perplex.

Rays of a UFO lead to disorders of the nervous system and in some cases to death. At the same time, the luminous rays are not an effective weapon. From them one can hide in the forest or under the cliff Bank. Sometimes UFOs have been trying for hours “to find” hiding them from people. The sniper with a night vision sight could shoot them for a few minutes, but for newcomers, they remained out of reach. Most often the victims of the rays emitted by a UFO, become hunters. Objects adhered to the tactics employed by hunters when stalking animals.

UFO attack in order to kill or injure people. This task can be performed much more efficiently even with primitive weapons. Their activity should not be viewed as a direct hostility, and as the fulfillment of a certain task, and its perpetrators don’t care about our feelings and health.

Such activity can be compared with the work of zoologists, shooting wild animals with tranq Darts. Animals, their actions will seem aggressive, although scientists have the best intentions, trying to reduce the harm to minimum. Bad shot, too, can be fatal. Some animals zoologists killed in the interests of science…

The aggressiveness of the UFO increases in direct proportion to distance from cities. Those who go by night in rural areas without cover of trees, risking to remain alone with the unknown hunters.