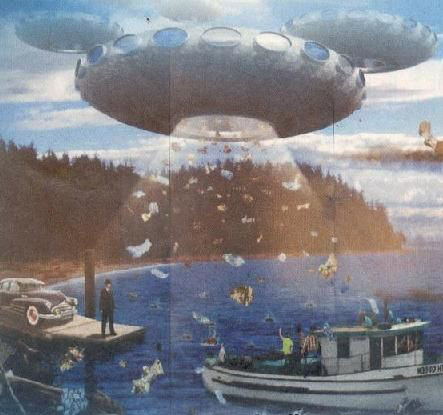 June 21, 1947 near the island of Maury appeared six UFOs, and then one of the objects observed by Harold dalam, and gave up a rain of small whitish metal particles, they were hot, as when dropped on water, rose pairs.

As you know, flying saucers is often credited with whitish metallic shade, but in this incident we are dealing with some metal shavings spewed out of the ship.

For some strange reason the intelligence section of the 4th army, the U.S. air force investigated the scene only 31 of June, ten days. Captain William Davidson and Lieutenant Frank brown had failed to detect small whitish metal particles, but something resembling pieces of porous lava they gave Kenneth Arnold, hired by the magazine faith to investigate the case, and he went down in history because of the famous incident on 24 June, which began with the post-war panic.

Arnold sent the remains for analysis to the chemical laboratory of the University of Chicago, where they were classified as waste of volcanic origin. The remaining chips, who were the agents of the intelligence the A-2 gone, as the plane, which was carrying agents in the Hamilton airbase, crashed near Kelso, Washington. Later the base Mac Cord confirmed that aboard the plane was classified material and, while the crew commander technician and landed safely on parachutes, agents were killed in the crash.

Ironically, it was during searches of the crashed aircraft Navy C-46 Arnold observed nine unidentified objects flying in formation over mount Rainier, on the border of USA and Canada.

Not surprisingly, after the disaster agents of A-2 Gave his immediate superior, Fred Christmann, perhaps under the pressure unit A-2, stated that the remains of the UFO were simply mineral formations collected on Maury island, all designed to attract media attention to the UFO. Thus ended the story of the island of Maury. At least in these two cases, the UFO left behind a real material traces. As for the rest of the postwar UFO, they set the standard for all future flying saucers.

Island Mori was due to many conversations that separate truth from fiction and fantasy is not possible. Whatever may be said of those who believe the entire incident was a hoax, it was the first post-war encounter with a UFO, and the description given by dalom, made history, becoming the model for many subsequent descriptions.

Gave told that UFOs from Maury island looked like inflated chambers, their design was not prominent parts, and their diameter was equal to 30 meters, in the center was a hole on a perimeter of the Windows, underneath was the overview window (maybe that was the Central hole). They looked like metal and was able to hover motionless in the air and make a quick vertical take-off.