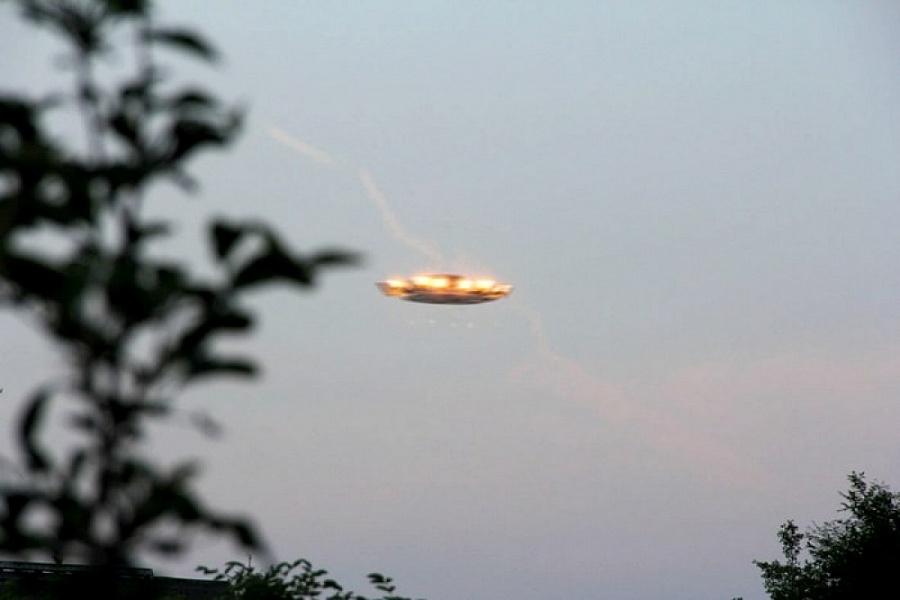 Cases, meetings with unidentified flying objects a lot. We will give only the most striking episodes.

Area residents often see white balls in the sky. In August 2011 Paremski threshold (Paransky the threshold is on the river Vitim, no one will never count how many time I’ve killed brave people who decided to slip the threshold on a raft, boat or canoe, how many human souls he absorbed in his foam, madly dancing shafts) came tour group from Vladivostok to engage in extreme sports.

At night they witnessed the arrival over the water bright white orbs that silently moved through the air, changing its shape and speed. In the winter of 2009 a resident of the village of Taksimo in the course of his working trip to the area in the same place witnessed the same phenomenon: some glowing balloons as floating in the air. In February 2011, at night, the same glowing orbs were seen over the mountains to Olga.

9 Sep 2011 the watchman artisanal artel “Modus-Auri came to examine the territory at five in the morning and saw in the sky, it is estimated, 20 balloons, flying each other in the direction of North. The watchman of the former cafe “Lesnaya Polyana district of the sixth kilometer of the road Taksimo — Bodaybo was also seen luminous objects, then reported the press service of the administration of the Muya district.

Kurumkansky district police participated in the search aircraft, a distress signal was received late in the evening of 14 August, near the village of Argada. Information about the incident, posted on the official website of the MIA of Buryatia, was extremely parsimonious. “On August 14 23.20 the duty of the defense Ministry of the interior “Barguzin” received the message Manager of the coordination centre search and rescue Tolmachevo airport of Novosibirsk on receipt of distress signal from an aircraft at 5 km North-East of S. Argade kurumkanskiy district.

In the area moved a group of rescuers. It included representatives of the emergency services, the police. The search is conducted”.Report any details of the incident in the press service of the Ministry of interior could not. Later, the information that the signal was false, was confirmed.

— The search party checked the location coordinates, the information was false, the traces of the crash. There are times when the signals from the beacons can be reflected and come in virtually any place of the earth a Similar incident occurred in the Irkutsk region. There is twice the signal came from the area of White, and the audit also showed that it was false, ” said the official representative of EMERCOM in Buryatia.

According to the Agency, this situation marks the first time in 17 years. Search did 10 people, police and firefighters.

In 1959 the Tu-104 barely appeared on passenger air transport. The first few samples was transferred to Irkutsk squadron. Here’s what he told Sharon, one of the first pilots who flew these “carcasses”: “It occurred in July 1959. The plane was supposed to land at the airport of Irkutsk. On Board were either athletes, or military. Someone famous, can’t remember exactly. Therefore, the dispatch service was given in a special mode of operation. And in the air is heard:

“We got an unidentified object, round, it goes glow. Pass…”.

All we had to sign a confidentiality agreement. Had it before, but the severity in this case was such that once the pilot Aleinu, problemseasy about what was heard in the control room, and is considered almost one of the best commanders of the ship in the Union, barely managed to stay in the squadron. And one of the managers just planted, and also, like I said, the disclosure that he had heard in the air. Aletin told colleagues that the fishermen, who in the Baikal waters, saw a plane that was chasing a glowing object, and he spent “carcass” literally to the water surface. The fishermen were able to see him pretty closely.

This collapsed into the lake, “carcass” is not in the register of losses of squadrons. More precisely, the data is there, but they are strictly classified.

In the summer of 1971 in Leningrad engineer George Filippov with his wife and 15-year-old son decided to go to Baikal. With them they took a makeshift inflatable sailing raft, or rather, three inflatable float and a Dacron sail. Knowing about the treachery of the Baikal winds picked up and a home-made motor-oar. As a main base family chose the island of Olkhon. We give here extracts from the diary of George Philippi, where he describes the unique phenomenon that was observed by his family.

“We decided to limit swimming around the island, sticking to land for lunch and overnight. From the shore we were supposed to leave not more than a kilometer, in the event of bad weather quickly leave the shelter. Given that after sunset began night breeze that could carry us from the shore, we tried to get back before dark. And only on the fifth day of our journey, relying on the motor, we have violated this rule that would meet the sunset on the water.

When the sun went down, we decided to return to shore. I tried to start the engine, but he categorically did not want to start. On a similar case on Board there were two oars to row they only had standing. I have decided to set sail to the time of change of wind direction to get a little extra traction.

Then it got dark and the shore is weakly stand out against the already dark sky. As we rowed, turning to face him, did not notice the beginning of the phenomenon. And only cry his wife made us look back. What I saw was so unexpected that we like enchanted, watching an unprecedented spectacle.

About half a mile behind us from the lake slowly rose three glowing columns that formed almost a perfect pyramid. When their height reached about a hundred metres, against the darkening sky we noticed on their tops black triangular platform. Then the ends of the columns, which were in the water, suddenly broke away from its surface and began rapidly to ascend, and the platform itself as though stuck in one place.

Columns synchronously drawn into the platform and turned into three bright white lights placed at the edges. A few seconds after that, the platform continued to hover motionless, and then rushed to the opposite shore side and disappeared over the horizon. This whole extravaganza took place in complete silence. Neither I nor my friends who I later told about this case, absolutely no idea, what a strange phenomenon we have observed”.

In the summer of 1984 “triangle” flying on a minor (according to observers, not more than 300 meters above the water) the height of the saw near the center of the lake, a group of Hydrogeologists. In may 1990, it was observed by the inhabitants of the village of Khuzhir on Olkhon island, and in early September 1998, flying high in the sky a black triangle was noticed by the resident of the village of Barguzin S. Potapov.

In April 1996, V. Zykov, a resident of the village Goryachinsk, worked on the lake ice fishing, about 200 metres from the shore. Next was his brother, and a bit further — two more fishermen. Hours in two days, he suddenly felt the shake of the ice, and then a loud roar, and the ice beneath their feet shuddered. Far from the fishermen from the ice rose a fountain of water or steam, and flew up into the sky some vague body of indefinite shape and color.

Over the Bay of SOR

In June 1992, a group of the technological Institute students had a rest in the Bay area COP. At night, the water they found a strange glow, whose source was at a depth. At first it was a bright flash, then they turned into a glowing circle, gliding on the water surface. The students were in a boat, and they worked the radio on medium wave. When approaching the circle to the boat in the air there was a strong interference that stopped when the circle is removed. The total time of observing this phenomenon — about five minutes.

In 2000, this place was visited by a group of students of the Ural Polytechnic Institute, knew nothing about the observation of their comrades. In the night from 2 to July 3, they were sitting by the campfire. Suddenly, far in the lake rose into the sky a white-blue beam that suddenly curved, forming a sort of arch. Then the arch turned into an ellipse, and began to ascend upwards.