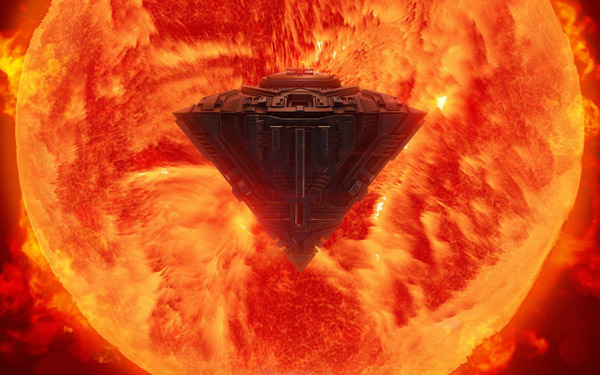 Behind our luminary are a relentless observation of several constellations of space satellites that record everything that happens in the near-solar space and transmit images to the Earth in real time.

For all the time of observation, a lot of Unidentified flying objects flying near the Sun were recorded, sometimes these giant objects produce refueling by pumping solar plasma into them, and sometimes UFOs fly out of it, which in size exceed the diameter of our blue planet by 100 or more times.

Now even once again such a giant object was seen flying out of the Sun. Such data is transmitted by SOHO and SDO spacecraft conducting surveillance of the luminary.

Many will say that this is impossible and that any object that entered the incandescent atmosphere of the Sun would immediately burn out, but I want to remind you that according to the theories expressed by scientists well known in scientific circles, there is a possibility that extraterrestrial civilizations can use our Sun as a portal for displacements through space.

Remember there were such popular films and the series “Stargate”, here and there is something like this when the huge energy of the Sun is used to instantly move from one point of outer space to another.