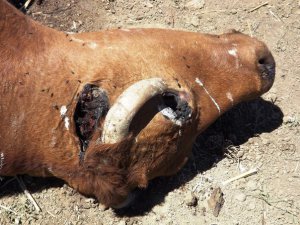 Mutilation of livestock is the cases of detection of animals with injuries, wounds of unknown origin, observed since the mid-1960s. Often pets are found to be bloodless, with organs removed with surgical precision.

Cases of detection of cuts in animals in the genital area are not uncommon. Mutilation of animals was observed even where alarm systems were used for their protection. The first reports of this kind came from the north of the United States, but then the livestock was damaged in Canada, Britain, Sweden, Spain, other European countries, from Brazil, Puerto Rico. Often, horses and cows suffer, but there is evidence of mutilation of sheep, birds, and seals. Even corpses of people with similar injuries were even found.

The most well-known cases

In 1897, newspapers reported that farmer Alexander Hamilton saw an airship on April 21 in Kansas. At night the farmer was awakened by the noise in the courtyard that came from him. It was a large cigar-shaped object, equipped with a wheel and a searchlight below, with a cab from below of transparent material, through which he saw strange creatures. Noticing people, the UFO hurried with a buzz to retire with the cow of the farmer, tied to the object with a rope. The next day, far away from Hamilton’s farm, the head, legs and skin of a cow with the stamp of Alexander Hamilton were found.

In 1943, this story was reintroduced in a Kansas newspaper, after which a letter was received from the editor of the Daily Herald, in which he confessed that the story of the kidnapping of the cow was invented. The investigation carried out in the 1970s confirmed that the case of Hamilton was a hoax.

On the night of September 8, 1967, in the St. Louis (Colorado) valley, Mrs. Berl Lewis and her brother Ben King went in search of a missing horse named Lady. They found her dead, with no skin around her neck and head, and there was no blood around her. The subsequent inspection of the scene showed that there was some resinous substance near the horse carcass. No traces were found near the horse, but a hundred feet from her were found traces of three apparently fleeing horses, mysteriously breaking off. On September 16, the same Berl Lewis found a part of the body with horse hair and received a severe burn from a green viscous substance that spilled from this part of the body. The autopsy of Lady’s body showed that some internal organs have been removed from her.

In 1985, 44 dead sheep with punctured necks were found in northern Ireland.

In 1993, a horse was found in Oxfordshire, the skin of which was cut off by squares.

In 1995, in Israel, the spouse farmers found their sheep and chickens in the morning dead. There was not a drop of blood inside or outside the sheep, and there were holes in the bones. The dog, who immediately died, had eyes cut out. After lying a few months in a landfill, the carcasses of animals mummified.

Relationship with the phenomenon of UFOs