Unprecedented snowfalls have fallen upon Japan 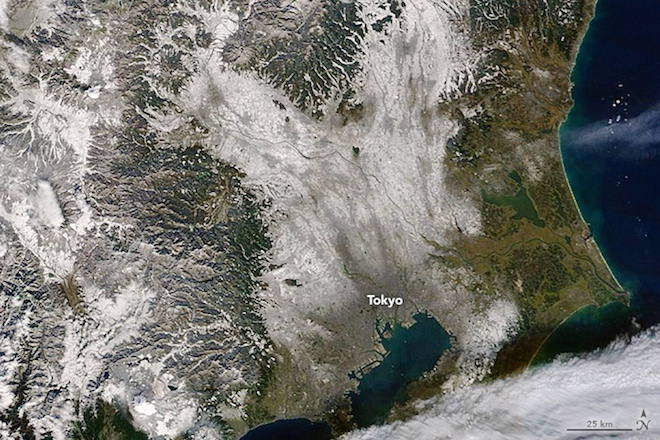 Last week in Tokyo snow has unexpectedly dropped out. It was the first November snowfall more than for half a century. On the same day, on November 24, the satellite of NASA “Terra” by means of the scanning spektroradiometr of average permission has made a picture of the Japanese capital covered with snow.

Apparently on the photo from space showing a picture in natural paints, snow this day has dropped out not only in the territory of Tokyo, but also his vicinities. 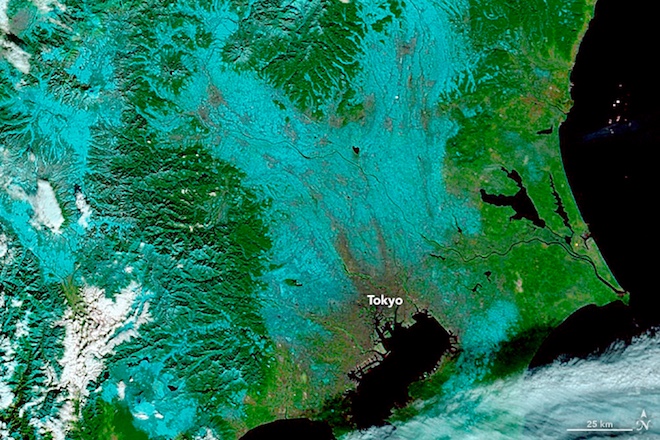 Striking contrast between snow (blue color) and clouds (white color) is reflected in the second picture executed in conditional flowers. Apparently, snow repeats contours of surrounding mountains and we will well distinguish from clouds in the high sea. The central Tokyo is painted in gray-brown color that, according to representatives of NASA, speaks about a smaller congestion of snow or its bystry thawing. As experts explain, the downtown snow, as a rule, leaves quicker, than rural areas as there is warmer because of so-called effect of “the city island of heat”.

Representatives of the Japanese meteorological agency explain that November snowfall in the Japanese capital has been caused by the cold air mass which has come from the Arctic. Meteorologists connect this blizzard with the Arctic oscillation — climatic feature of the northern hemisphere. Usually areas of high pressure in middle latitudes interfere with penetration from the Arctic of colder air masses of low pressure. Nevertheless, sometimes air systems of weak pressure break through this barrier, and cold air manages to promote to the south as in this case.