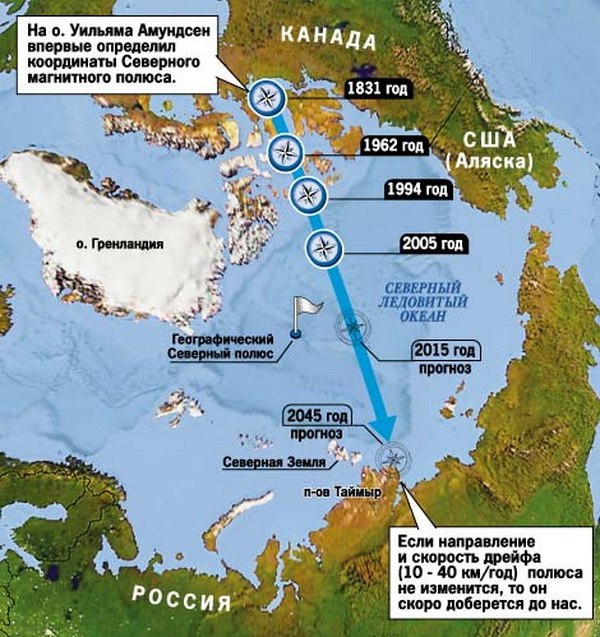 Areas of the Earth with permanent magnetic anomalies are places of increased stress on human health. Such places, according to popular beliefs, are not accidentally considered to be perishable. The areas of anomalies attract UFOs, it is in these places that they are observed most often.

Over the past 40 years, the motion of the magnetic poles has accelerated almost 5-fold due to changes in the energy of the Earth’s core.

Geophysicists explain this by a sharp increase in the internal energy of the Earth’s core: the flow of streams in the mantle increases, which leads to shifts in the lithospheric plates. At the boundaries of these plates or in places of tectonic faults, magma breaks, causing earthquakes and volcanic eruptions.

And if the North Magnetic Pole has been in the Canadian Arctic Archipelago for the past 400 years, now it has gone beyond Canada. The magnetic pole has been drifting towards Taimyr since the second half of the 20th century. We can say that it is moving with increasing speed towards the shores of Siberia. Perhaps the magnetic pole is attracted by the East Siberian magnetic anomaly, because it is one of the largest anomalies in the world, along with the Canadian, the Antarctic and the Brazilian.

The origin of the world’s anomalies is due to the movement of magma flows. Therefore, the magnetic stress of the East Siberian anomaly will only increase, which in turn will lead to an increase in tectonic activity. Although the anomaly lies in the lower reaches of the Lena and the Yenisei, in Transbaikalia, a significant magnetic declination is observed from its influence (the magnetic needle on the compass deviates from the true direction to the Earth’s magnetic pole). Needless to say, Buryatia traditionally belongs to the number of regions with increased seismicity, because Baikal is a fault of the earth’s crust, which is gradually expanding.

Moreover, according to the theory of the scientist Gennady Ershov, one of the powerful mantle streams, causing the East Siberian anomaly, passes just under Lake Baikal and rushes toward Japan. The flow of hot lava flows relatively calmly under the West Siberian Plain. But when the stream enters the arches of the Central Siberian plateau in the interfluve of the Yenisei and Lena, the intensity of the magnetic field is significantly increased – up to 60 thousand nanoscale. This is the “concentration of magnetic energy” that is record for the Earth. But in the south the mantle river is pressed by the Sayan Mountains.

According to geophysical estimates, the East Siberian anomaly is submerged in the depths of the Earth’s mantle (over 1,000 km) and extends upward over the earth’s surface to an altitude of up to 3,000 km. This is a kind of “magnetic antenna” of our planet, along with three other world magnetic anomalies involved in the change of the global geomagnetic field.

It should be noted that Baikal has its own local magnetic anomalies. For example, in the region of the underwater Academic ridge, they reach 400 gammas. The magnetic declination in Lake Baikal is not the same in its various regions. It varies from 2.2 ° in the southern basin to 5.2 ° in the northern basin.

Not so long ago, science revealed that magnetic anomalies affect the living nature. Thus, the yield in the settlements located near the zone of the magnetic anomaly is 10-15% lower than far from this zone. The growth and development of crops depends on the places of their cultivation relative to the magnetic zone.