Elon Musk spoke about the explosion of “Falcon” 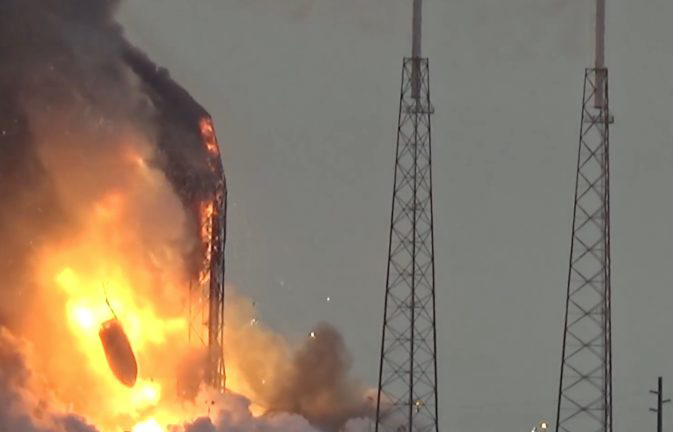 The CEO of the company “SpaceX” (SpaceX, whose rocket Falcon-9″ (Falcon 9) September 1 exploded on the launch pad at Cape Canaveral, said that the explosion can be called “the most difficult and complex problem with which the company has faced in 14 years.” The explosion occurred during refueling of the fuel, the engines were turned off, heat was not.

Elon Musk asked for help from NASA, the Federal aviation administration of the United States and other concerned agencies, but also appealed to those who have the video of the explosion, with a request to send it to the following address of the company (the report@spacex.com). It is noted that for a few seconds before the explosion was heard cotton, which could come from missiles, or from somewhere else.

While Musk said that if the Board were astronauts, to them nothing had happened. The fact that the capsule of the spacecraft “dragon” (Dragon), which the company will use for manned flights, beginning next year, will be 8 embedded in the casing of the engines for immediate ejection if the rocket underneath will explode.

This alarm system was designed to work only in case of emergency, it has been successfully tested in may last year. Capsule ship was launched into the air from the tee and landed in the ocean about 1.6 km from test place.

However, the exploding Falcon-9″ was put into orbit Sputnik, not astronauts in the “Dragon”. Judging by the video, the satellite “Amos-6”, located on the top of the “Falcon-9”, fell to the ground in about 9 seconds before the flash fire consumed the rocket. That would be enough for alarm system “Dragon” to raise the capsule to a safe distance.

The motors can lift the capsule at 100 m from the rocket in 2 seconds and 500 m in 5 seconds. On Twitter, Musk said that although the video seems to have been an instant explosion, it was rapid fire, with “Dragon” in this situation nothing would have happened. Capsule ship will be equipped with ejection system only in case of transportation of astronauts — in satellite launches and during missions to the ISS, the engines installed on it will not.

However, there are questions as to why the “Amos-6” was installed on the rocket during engine test. For example, the French satellite company Eutelsat has demanded from “SpaceX” to test the engine without the satellite company. However, “Amos-6″ belonged to the Israeli company Spacecom, which declined to comment on the policy for testing engines. Experts comment that the explosions during the tests rarely happen and the satellites are often set at the time of the test.

Thus, the representative of at least one company using the services of, SpaceX”, noted that the company had revised its terms according to whether to have a satellite installed on top of the missile during the tests in the future. In SpaceX” refused to comment on company policy on tests of engines installed satellite.