Evacuation in California could collapse the dam 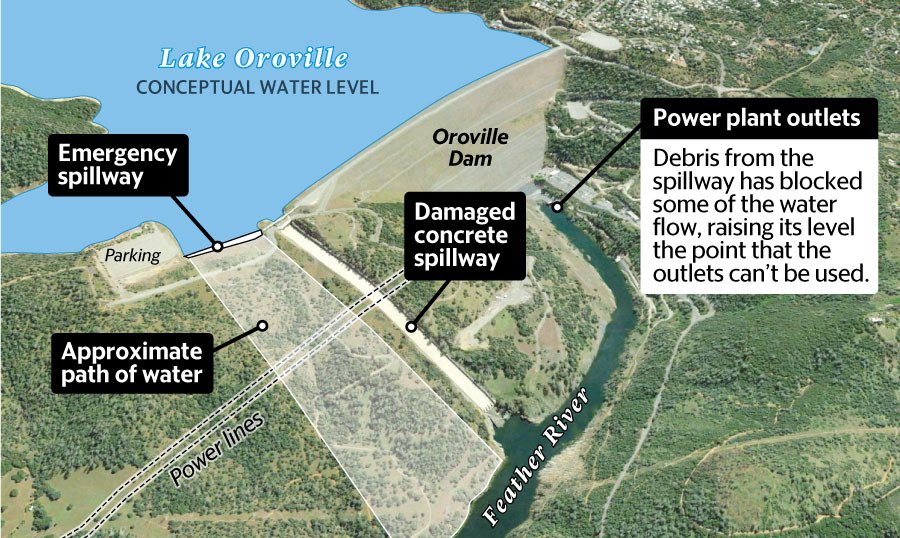 In the vicinity of California city of Oroville were evacuated about 130 thousand people. Under the threat of destruction was the country’s largest dam. Due to heavy rains and snowfall, the water level in the rivers has sharply risen, the design of the dam has eroded and the emergency discharge of water caused additional damage.

Thousands of people leave the surroundings of the city of Oroville, California, where he began the destruction of the largest dam in the United States. Local authorities have announced the urgent evacuation of residents.

In cities and towns where evacuation is conducted, documented cases of looting. According to a police officer of the city of Oroville, multiple offenders arrested.

Heavy rains led to erosion of the main and then the auxiliary spillway that threatens the destruction of the whole structure of the dam. The County Sheriff stated that the erosion of the emergency spillway could lead to “an uncontrolled discharge of water from lake Oroville”.

To prevent accident discharge of water was enhanced to 2.8 cubic meters per minute.

For the evacuated residents prepared a temporary shelter in Chico of Butte County.

According to the Sheriff of Butte County Cory Honea, despite the threat of destruction, there is still a chance to restore the dam and to “prevent a crisis”. According to local rescue services, the destruction of the structure occurs, but not as fast as predicted.

Power is located in the neighborhood of Yuba County state of California has issued a warning that local residents did not take any trips to Oroville.

The Department of water resources staff reported that within the next hours it will be clear whether the bear dam water pressure.

The volume of water in the lake is estimated at more than 4.3 billion cubic meters. m. the height of the dam in Oroville is 235 m high and is the highest dam in the United States. She is only 7 meters below the Sayano-Shushenskaya HPP on the Yenisei river.

On 11 February, the water from the lake began to overflow through additional hydroslim dam. It was the first time in 50 years because of heavy rains.

Only in Oroville is home to about 16 thousand people.