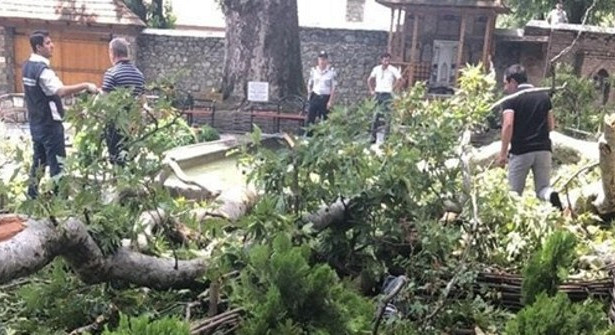 Four injured by the fall of a tree in the city of Sheki in the north-west of Azerbaijan were sent on Sunday by helicopter to Baku. This was reported in the press service of the Ministry of Health of the Republic.

“Four victims of emergency in Sheki, including three Syrian tourists, were sent by helicopter to continue treatment in Baku,” the press service said. The ministry clarified that one of them, a citizen of Azerbaijan, had a severe head injury and a fracture of his right leg, and the rest had limb fractures.

“The issue of sending another ambulance to the Institute of Traumatology in Baku, which has a comminuted fracture of the leg and traumatic shock, is also being discussed,” the Ministry of Health said. Another injured who received a closed spinal injury will continue treatment in the Sheki central regional hospital.

“The rest of the victims after medical care were released for outpatient treatment,” the Ministry of Health said.

On Sunday afternoon, in the courtyard of the Khan’s Palace in Sheki, the branch tree planted in 1530 broke down and fell. According to preliminary data, the reason was the torrential rain and bad weather. As a result, 19 people were injured, including two Russian and five Syrian tourists. Hospitalization Russians did not need. The situation in connection with the emergency and treatment of the victims are under the special control of the President of Azerbaijan.

The Khan Palace, built in the 18th century, was included on the UNESCO World Heritage List last week along with the historic center of Sheki.